You are here: Home / Site News / Featured / How London’s Boroughs Got Their Fascinating Names 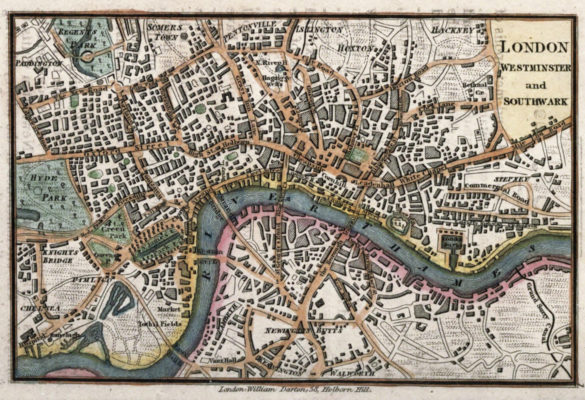 What we know of as London is really 33 smaller districts, including the City of London.  Since the original settlement of Londinium was founded by the Romans after their invasion, the city has slowly grown up around it and the 32 surrounding communities eventually became absorbed into the greater metropolitan area.  But how did each of these boroughs get its name?  Some come from people, landmarks, and words from older forms of English and other languages no longer spoken.

The borough is a combination of parts of two separate municipal boroughs.  Barking actually comes from the Town of Barking, whose name comes from the Anglo-Saxon “Berecingas”, which means “the settlement of the followers or descendants of a man named Bereca” or possibly “the settlement by the birch trees”.  By the 8th century, its name was Berecingum and by the reign of William I, it was Berchingae.  The phrase “barking mad” is said to come from an insane asylum that was located there in the Middle Ages.  Dagenham was originally known as Dæccanhaam, wherein “ham” typically means “farm”, so it was “the farm of a man named Dæcca.”

The earliest recording of Barnet comes from 1070 as “Barneto”.  Its name means “the place cleared by burning” in Old English.  This possibly refers to the area having been heavily forested until it was cleared in the Middle Ages.

Bexley became a municipal borough in 1935 and its name comes from the Town of Bexley.  The town was founded around 814 AD and the name originated as “Byxlea” which means “box tree clearing”.

The River Brent runs through the borough, which gives the area its name.  The river’s name was originally Breguntford, with the Celtic root “brigant” meaning “elevated or high place”, possibly also coming from the Celtic goddess Brigantia as her name also means “high” or “elevated.”

Like Bexley, Bromley gets its name from the town within the borough.  The first recording of the town is from its charger in 862 AD which lists the name as “Bromleag”, meaning “woodland clearing where broom grows”.

The borough’s name comes from Camden Town, which was named for Charles Pratt, 1st Earl Camden, who named his estate Camden Place after its previous owner, historian William Camden.

Croydon was named by the Saxons when they settled the area in the 8th century, calling it Crogdene or Croindone.  This name is believed to have derived from the Anglo-Saxon “croeas deanas”, which itself means “the valley of the crocuses”.

The Town of Ealing is the origin of the borough’s name, and the town’s name in the original Old English was “Gillingas”, meaning “places of the people associated with Gilla”.  The name changed over time to Iling, Giling, and Yiling, until Ealing became the formalised name in the 19th century.

Enfield’s first recording was as Enefelde in the Domesday Book and could either be Anglo-Saxon for “land of a man named Eana” or “where lambs are reared”, considering “ēan” was the word for lamb.  The borough was also home to Enfield Town, which got absorbed into the city by the 20th century, with the borough being created officially in 1965.

The borough’s name comes from the Town of Greenwich, itself gaining the name from Saxon settlers who named it Grenewic, or “green port”.

The surname Hackney actually comes from this section of London, itself named for a man known as Haca and “eg” or “ey”, meaning a raised area in a marsh, much like an island.  The name was first recorded in 1198 AD as “Hackney”.

Another combination of districts, the two were merged in 1965.  Hammersmith is possibly one of the simplest name origins, simply being a place where a blacksmith forged hammers.  Fulham was originally “Fulanhamme”, which has multiple possible meanings.  One is “the place of the fowls”, while another is “the place of the mud.”  Yet another explanation is “land in the crook of a river bend belonging to an Anglo-Saxon chief named Fulla”.

As with most boroughs, Haringey was settled by the Anglo-Saxons and probably named for a local chief named Hering.  Herings-hege in Old English meant “the enclosure of Hering”.  The first recording of the area’s name was Herenhg in 1195, then Haringeshye in 1243, Haryngaye in 1371, and finally Haringey in 1387.

Harrow in Old English was “Hearg” which meant “heathen temple”, which was likely located on Harrow Hill where St. Mary’s Church is presently.  From Hearg, the name changed to Harrowe in the late 14th century and the “e” was later dropped.

Havering in the original Anglo-Saxon was “Haeferingas” or “the settlement of the people of Haefer”.  At one point, it was a royal borough named Havering-atte-Bower and was in the Crown’s possession from the 11th to the 19th century.

Don in Anglo-Saxon denotes a place, so like so many other boroughs on this list, it is reasonable to conclude that Hillingdon was named for a man called Hille, Hilla, or Hilda.  It appears in the Domesday Book as “Hillendone”, meaning “the hill of a man named Hille”.

The borough’s name in Old English was “Hundeslow” and in Anglo-Saxon, it was “Hundes hlāw” or “dog’s mound”, though it could also be the “mound of a man named Hund”.  Others believe it could have been Honeslaw or an area of suitable hunting land.

The Saxons called the area Giseldone and later Gisladune, both of which meant “Gīsla’s Hill” from the name “Gīsla” and “dun”.  Over time, the name changed to Isledon, which was used until the 17th Century, at which time, the more modern spelling was adopted.

The Royal Boroughs of Kensington and Chelsea were merged in 1965.  Kensington draws its name originally from Kenesignetun, or “Kenesigne’s land”.  By the completion of the Domesday Book in 1086, the name morphed to Chensitone and Ksyington by 1396.  Chelsea was a Saxon village called “Cealchythe”, with “cealc” meaning “chalk” and “hythe” meaning “dock” or a landing place for boats, so it was likely a landing spot with heavy amounts of chalk or limestone.  Over time, the name evolved into Chelceth, Chelchith, and then Chelsey.  The current spelling was in use at least by the time of the Domesday Book.

While the borough is named for the town of Kingston Upon Thames, the original name was Cyngestune (or “King’s Estate”) as far back as 838 AD.  It was at that time that a Saxon council met here and issued 30 royal charters.

The first recorded name of the borough was Lambehitha, or “the landing place for lambs”, suggesting that it was originally a disembarking point for ships carrying lambs to the city.  It adopted its more modern spelling by 1255.

It’s said that Lewisham was founded by a Jute named Leof who burned his boat on arriving there, intent to settle the land.  Some records thus indicate that the original name was Leofshema and the Saxon name for the area was Levesham or “house among the meadows”.

Merton was an ancient parish apparently named for Merton Priory and the adjoining village.  It appears in the Domesday book as Mereton

Newham essentially means “new place” and is one of the only boroughs where the name doesn’t have some ancient meaning.  Instead, it was merely a combination of East Ham and West Ham, when the districts were merged to form the borough in 1965, becoming a “new” Ham.

One of the simplest borough names, Redbridge comes from a bridge constructed of red brick over the River Roding during the 17th century.  Its colour set it apart since other bridges in the area were built of white stone.  The bridge was demolished in 1921, but the name remained.

The borough’s name comes from the Town of Richmond, which sits on a bend in the Thames.  The original Saxon name for the location was Sceon, then Shene, but the current name comes from Richmond Palace, built by King Henry VIII in 1501.

Named for the Town of Sutton, the name originated as Sudtone, which was comprised of the Old English words “sūth” and “tūn”, meaning “south farm”.

When the borough was created in 1965, the original proposed name was Walthamstow, so named for the Town within the borough.  The first recorded name of the town was Wilcumestowe in 1075, meaning “the place of welcome” and then in the Domesday Book as Wilcumstou.  However, residents of the borough opposed this naming and instead opted for Waltham Forest, so named for the forest established by the Normans to preserve deer for the king to hunt.

The name comes from the River Wandle and appears in the Domesday Book as Wandesorde and Wendelesorde.  Both names translate as “enclose of a man named Waendle”.

The name Westminster actually comes from the abbey church of St. Peter’s (more popularly known as Westminster Abbey) and was used to differentiate it from Holy Trinity Priory in Aldgate, also known as “East Minster”, with St. Peter’s being in the west of the city and Holy Trinity in the east. Westminster is now known as the center of British government.