You are here: Home / Guides / Top Ten London: Top 10 Things to See and Do in Richmond Upon Thames 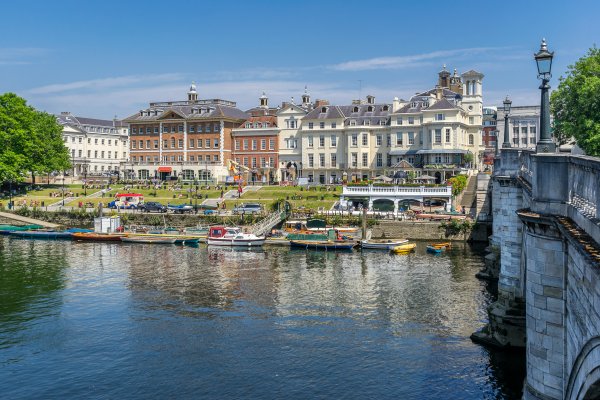 The London Borough of Richmond Upon Thames is one of the greenest places in all of London, with great tracks of parkland existing alongside homes, businesses, and historic landmarks.  This creates a wonderful mix of urban culture and natural splendor that makes it a top destination in the city.  Of course, this also gives tourists a wonderful array of places to visit.  From one of sport’s most important locations to a pub that might leave you stranded because of its location, we’ve outlined our top ten favorite places to visit in Richmond.  Let us know some of your own favorites in the comments.

One of many pubs running along the Thames throughout London, the White Cross has the distinction of possibly leaving you stuck there for a while.  Being so close to the water and closer to sea level than other pubs, the river’s tides will rise and cut off pedestrian access.  While this might seem off-putting, there’s no other pub on the Thames that will get you that close to the water, so timing your visit right means you can dine right beside the river.

Langdon Down Museum of Learning Disability

Learning disabilities have been a field of study since the 19th Century, and one of the leading figures in this area was Dr. John Langdon Down, who opened Normansfield Hospital in 1868 to aid in the education of people with learning disabilities.  The former hospital now serves as a museum to his work and legacy as well as having collections of the artistic works of residents who were treated there.

Wetlands are an important and in some cases disappearing, ecosystem.  WWT London Wetland Centre has been a designated protected wetland reserve since 2000 and since 2002 has been a Site of Special Scientific Interest.  The center was formed out of several small reservoirs tucked into a loop with the River Thames and is home to many critters that depend on this ecosystem to thrive.  There’s plenty to do when you visit, so be sure to plan accordingly.

King George II’s mistress, Henrietta Howard, had this great Palladian mansion built from 1724 to 1729 under the direction of architect Roger Morris and Henry Herbert, 9th Earl of Pembroke.  Today the estate is managed by English Heritage and offers tours of the house and Henrietta’s gardens, as well as putting on events on a regular basis from yoga to concerts to dog shows.

A great example of a Victorian venue, the Richmond Theater opened in 1899.  The theater was designed by Frank Matcham and provides one of the best examples of his work with a beautiful exterior and ornate interior. Originally constructed as an opera house and theater royal, today it sees any number of performance including book lectures, comedians, singers, movies, and even lectures with sporting legends.  Make sure you keep up with the theater’s schedule to find the event that best suits your own tastes.

Much like America’s own National Archives, the National Archives of the United Kingdom is a repository for the country’s most important documents, some of which date back over 1,000 years.  Whatever you want to know about the United Kingdom, chances are you can find documents here that will help with your research as well as a friendly staff willing to assist you.  From war to UFO sightings, you can find documents on just about anything.

It’s always a priority for me to list a local museum on this list because they are often the best ways to learn about the history and culture of an area.  The Museum of Richmond is supported by the local borough council and located in the Old Town Hall, chronicling Richmond upon Thames’s history from the earliest settlements to the modern day.  Current exhibits include Richmond’s prehistory, the Curator’s Tour, and a celebration of the museum’s 30th anniversary.

Owned by the Rugby Football Union, Twickenham Stadium is the host pitch for the England national rugby union team.  If you’re looking to head to a match, you can find one of the stadium’s 82,000 seats to watch.  Additionally, you can take a tour of the stadium or better still, take a tour of the World of Rugby Museum and learn more about one of England’s national sports.

Kew Gardens is one of the largest and most diverse botanical gardens in the world, with over 30,000 different species of plant spread out over 300 acres.  In the middle of all this is Kew Palace, a royal palace that has been home to Robert Dudley, Queen Charlotte, and the children of King George II.  The Dutch House is all that remains of the original palace, but it is still worth seeing for its historical value and paired with the Royal Botanic Gardens, you could spend an entire day here.  Truly, it is the jewel of Richmond and the no. 1 place you’ll want to see.