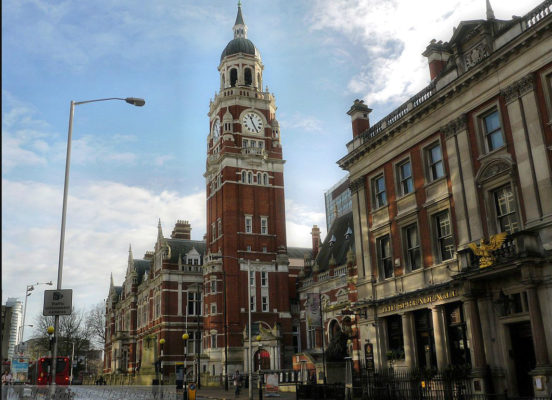 The exact origins of Croydon’s name are unknown, but historians believe this area of South London is derived from the Anglo-Saxon for “crocus” and “valley,” which suggests it was an area for growing saffron.  For centuries, it’s been a transportation corridor from South England to London from the ancient Roman road to the Croydon Canal and later the railway.  Today, Croydon remains a bustling part of Greater London with plenty of attractions for visitors and residents alike.  We’ve identified ten of our favorites below, and you can let us know your own in the comments.

Whether you’re a child or an adult, trampoline parks can be pretty fun, and Croydon’s own Oxygen Freejumping offers a lot to visitors.  More than just jumping on a trampoline, you can enjoy the mega airbag or play games such as trampoline dodgeball.  You can also do fitness challenges and even an obstacle course there.

Much like the original Boxpark in Shoreditch, Croydon’s location provides a unique entertainment and restaurant venue constructed out of old cargo boxcars.  While Croydon lacks shops, it offers a variety of food from donuts to sushi and any number of clubs and concert venues.  Boxcar Croydon offers some excellent date night options if you want to grab a meal, some drinks, and go dancing into the night.

The Shirley Windmill is only one of four windmills open to the public in London.  Even though it hasn’t been in use for milling since 1890, it has most of its original machinery intact, making it worth a visit to see how windmills like this helped to provide for the city’s needs.  The windmill is open for guided tours on the first Sunday of every month and on National Windmills Day, though during the week tours are limited to pre-arranged groups.

Brought to you by Lost Format Society, the Rooftop Cinema is a unique way to experience some of your favorite films.  The cinema runs during spring and summer every year, and while the locations and films may change, the fun is constant.  LFS also manages to round up local restaurants and bars to help provide dinner and beverages during its screenings so that you can make a full evening of it.  Past films have included City of God, Sully, and even Charlie Chaplin’s The Gold Rush.

Despite the name, it’s not the kind of green you’ll want if you’re looking for nature.  Instead, the park is home to Crystal Palace FC and has been their home ground since 1924.  As with most football stadiums, Selhurst Park offers tours nearly every day of the week except on matchdays.  The stadium may not be much to look at if you’re not a Crystal Palace supporter, but it’s worth visiting for the history alone.

Those who are looking for nature will want to visit one of the best green spaces in all of Croydon at Coombe Wood.  The park features over 14 acres of greenery featuring a pond and a mixture of gardens and woodland.  Each garden is almost like its own room, featuring different flora that will lead you on a path to the Coombe Wood Café, where you can enjoy drinks and a meal before heading back into the natural beauty.

Part pub and part theatre, the building that houses the Spread Eagle in Croydon has the pub on the lower level and a fifty-seat theater on the second floor.  Managed by Fuller’s, the pub has a charmingly traditional atmosphere and a range of their ales along with a robust food menu featuring many traditional British favorites.  Upstairs holds any number of events throughout the week from plays to comedy shows to cinema nights.

If you’re looking for the best view of Croydon, the viewing platform at Addison Hills will give you your best opportunity.  In the middle of London’s largest area of heathland, the purpose-built platform provides not only a great view of Croydon but beyond to the rest of London.  Besides the viewpoint, the park offers a great walking loop, horse rides, and even the secluded Royal Garden Chinese Restaurant.

Billing itself as the oldest street market in London, Surrey Street Market has featured in records dating back to 1276.  The market operates seven days a week selling food, clothing, art, antiques, and everything in between.  Surrey Street Sundays sees a different event every week, from specialty markets to outdoor entertainment, so there’s always a reason to visit.

Founded as the Town Hall and library in 1896, it no longer houses the Croydon Council, but the library is still there and is the main branch for the borough.  Additionally, the clocktower is also home to David Lean Cinema, an arthouse movie theater that was once on the verge of closing until the community (including the Spread Eagle Pub) stepped in to save it.  The last major attraction at the clocktower is the Museum of Croydon, where you can learn more about the borough’s history and impact on Greater London.