You are here: Home / Guides / Top 10 Gardens in London for a Respite On Your Next Trip

Sometimes in the middle of the city, you need to get away and find some peace and quiet.  That can seem difficult in an urban environment, but London is peppered with gardens where respite can be had.  Not all of them are huge sprawling greenspaces, some are like small islands in the concrete jungle.  When you need a moment while visiting London, we hope you will consider one of these ten gardens to visit. 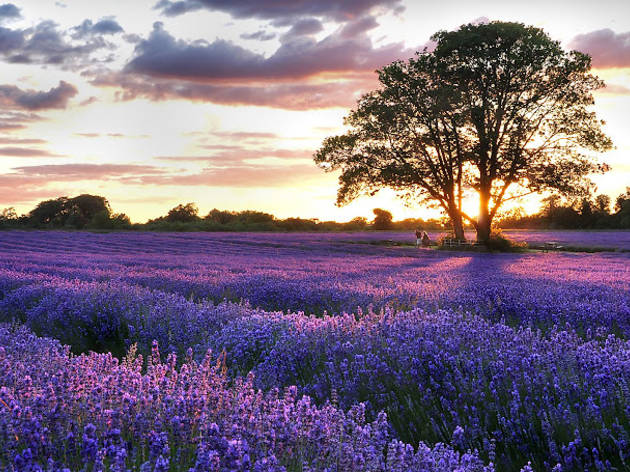 Just south of Croydon, Mayfield Lavender is a farm that grows the beautiful purple flowers used in everything from tea to soaps.  The farm was established in 2006 to help revive the industry in the North Surrey Downs.  The farm is open to visitors from 1 June to 17 September and you can walk amongst the rows of lavender plants, taking in the relaxing fragrance and enjoying some time away from the city. 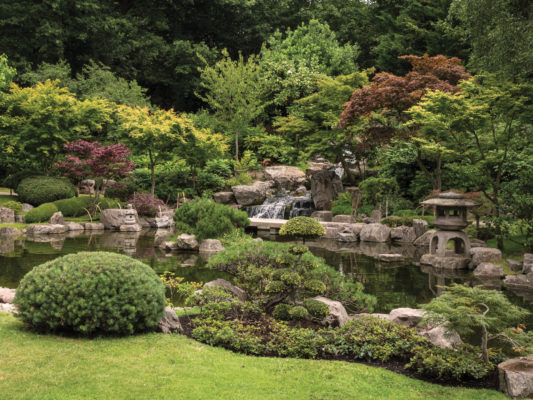 In the middle of Holland Park, the Kyoto Japanese Garden was a gift to London from the city.  The garden contains many of the elements in a traditional Japanese garden, including stone lanterns, a koi pond, waterfalls, and native plants.  The park’s peacocks are also frequent visitors, adding to the majesty and serenity of the garden.  Kyoto Japanese Garden is a great place to meditate or just admire the beauty. 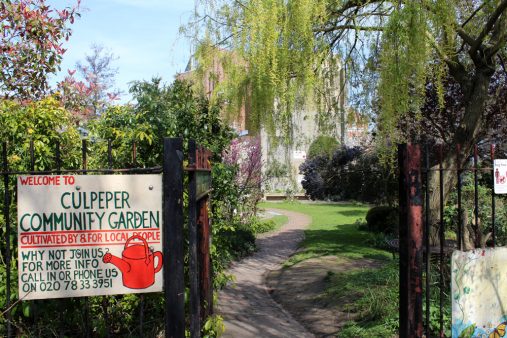 Located in the heart of Islington, Culpeper Garden is one of the greatest community gardens in the city, showing off how beautiful it can be for neighbors to work together.  Culpeper exists both as a city park and an environmental community project, meaning that those flowers you see or shrubs being planted have been done by people who live just down the road.  Many of Islington’s residents use it as a chance to garden away their stress and visitors can do the same when they visit during daylight hours. 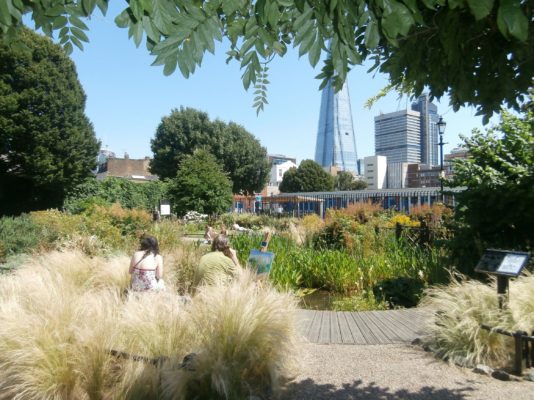 Long having fallen into shabbiness, this Victorian garden in Shoreditch was first established by Octavia Hill (one of the founders of the National Trust) in 1886.  It stopped seeing many visitors in the late 1940s and was brought back to life in the early 2000s.  Hill meant for the area to be an example of how interaction with nature can benefit the poor, and today, the renewed Red Cross garden provides a stress reliever for many visitors. 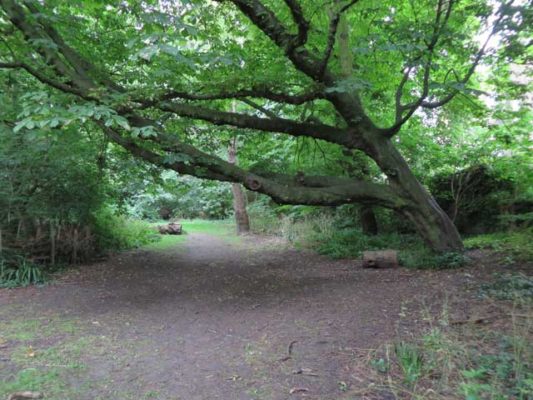 Not too far away from Red Cross Garden is Barnsbury Wood Nature Preserve, which is the smallest natural protected land in the United Kingdom.  George Thornhill built this as his private garden in the 1840s when he constructed the surrounding houses, but over time, nature took control and several species of birds, insects, and animals took to calling Barnsbury home.  There’s limited access on Tuesdays throughout the year and on Saturdays from July to the end of September, staffed by local volunteers.  Barnsbury shows that nature can thrive anywhere, even in the city. 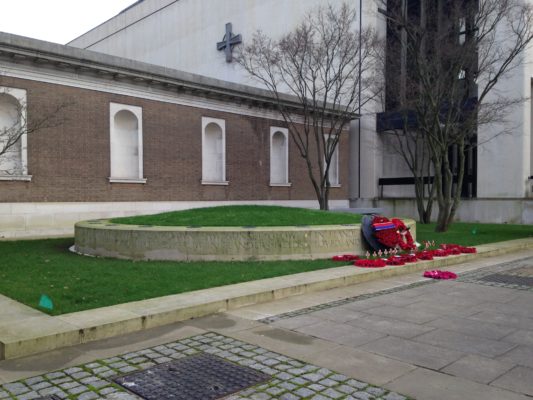 Sometimes a garden should be a place of solemn reflection.  The garden is located next to Guards Chapel at Wellington Barracks and is dedicated to those who fought and died in World War I.  It was designed by Belgian architect Piet Blanckaert and the centre mound contains dirt from Flanders Field in Belgium.  Simple and elegant, it is a fitting tribute to all who served and is worth a moment of contemplation.

St. Dunstan in the East 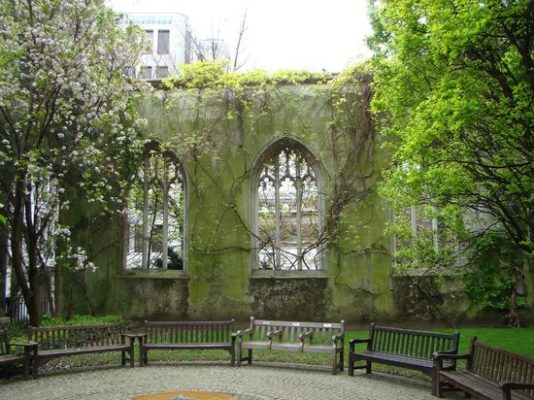 Barnsbury Wood was one example of nature taking back the city, but that actually started as a garden, as opposed to St. Dunstan in the East, which was a beautiful 12th Century church between the Tower of London and London Bridge until it became one of the casualties of the London Blitz in World War II.  The tower and steeple designed by Christopher Wren as well as the north and south walls were the only parts to survive, and the City of London opted to transform it into a public garden rather than rebuild.  Hidden amongst the city’s towers, it’s one of the best secret gardens in London and the greenery creeping over the church walls is truly a site to behold. 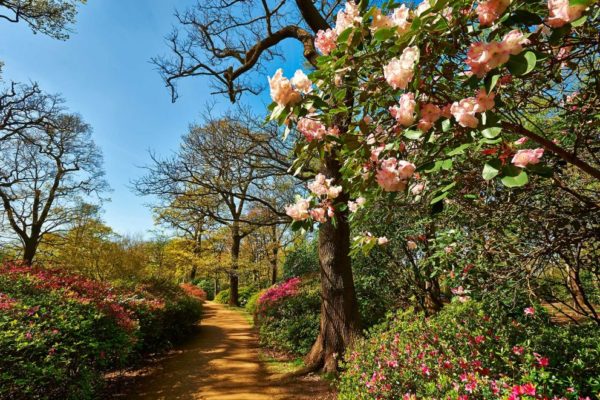 Amongst the Royal Parks, few are as breathtaking as Isabella Plantation.  The 40-acre Victorian woodland was planted in the 1830s, but not made open to the public until 1953.  Clearings, ponds, and streams are peppered with all kinds of fauna that are worth seeing when they begin to bloom in Spring, especially the azaleas and rhododendrons.  The garden is also home to a few Sites of Special Scientific Interest. 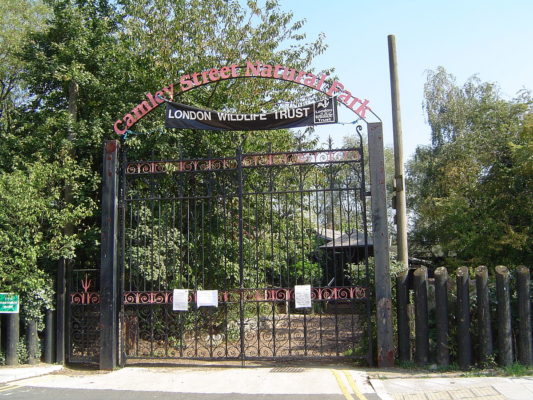 Close to King’s Cross, Camley Street Natural Park is one of the city’s excellent nature preserves.  Besides woods and grass, there are wetland habitats such as ponds, marshes, and reedbeds that provide a home to many butterflies, birds, plants, and amphibians.  It runs right along Regent’s Canal and some of the larger animals living there include kingfishers, bats, mallards, and geese.  London Wildlife Trust also hosts nature watching and pond dipping sessions for kids, so it’s a garden that can be fun for everyone in your family. 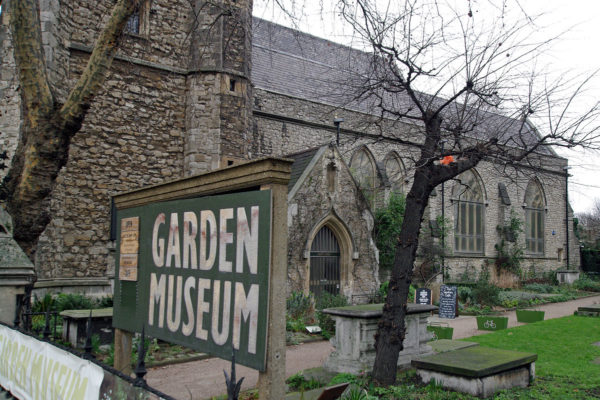 Combining a museum with one of the city’s best gardens, the Garden Museum is dedicated to the history of gardening in the United Kingdom.  It’s based in the former St Mary at Lambeth Church, which was once home to the tombs of the Howard family and was de-consecrated in 1972.  Four years later, the museum’s founders were inspired by the tombs of two royal gardeners to transform the church into a tribute to gardens all over Britain.  In addition to having some lovely gardens in what was once the churchyard, the interior has exhibits on traditional gardening tools, well-known gardeners, and art.  While touring the gardens of London, it should certainly be your first or last stop and reopens in late May after extensive renovations.