You are here: Home / History / London and the Industrial Revolution 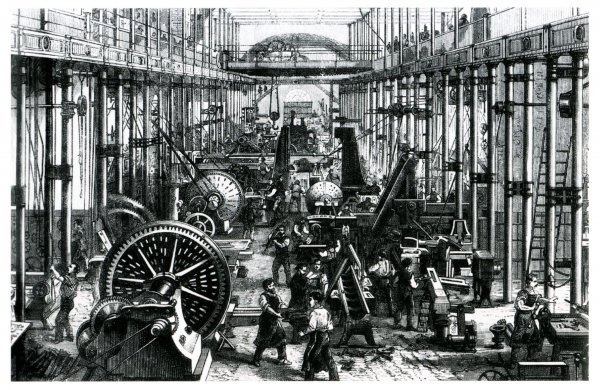 The Industrial Revolution changed the world forever.  The coming of mechanized production marked a shift from a mostly agrarian society to a technological one.  That shift also brought a population migration from the country to urban areas, resulting in an explosion in city populations and a strain on infrastructure.  This was most evident in London, which was arguably the first city affected by the Industrial Revolution as this worldwide event originated in the United Kingdom.  The Industrial Revolution would turn London into one of the world’s first megacities as it grew the swallow up several parishes and areas that had once been farmland and created new demands on city services thanks to overcrowding.

By the mid-18th Century, London was a city of 750,000 and still depending upon gong men to take away human waste and hand pump wells to get water.  The demolishing of sections of the London Wall in Bishopgate, Cripplegate, and Ludgate in 1760 was a portent of things to come as the old would give way to the new.  The city began paving streets in Westminster and the City of London.  London also improved roads leading to the city, cutting a coach trip from Edinburgh down to two days instead of two weeks between 1780 to 1830.  London began to recognize its growth with the London Building Act of 1774, setting out building standards to control growth that previously had been haphazard.

From 1801 to 1851, the city’s population doubled as factories on the city’s outskirts brought new residents seeking work out of the countryside.  This led to overpopulation issues such as the creation of slums where poorer citizens lived in overcrowded tenements and a lack of proper sanitation put these populations at risk for the spread of disease, such as multiple cholera epidemics from 1832 to 1866.  In one such event, Dr. John Snow was able to identify one of the handpump wells on Broad Street as the source of the infection.  The nexus between the city’s water supply and waste disposal was no more evident than the Great Stink in 1858, in which the sheer amount of waste being dumped into the River Thames created a public nuisance of such veracity that the Northern and Southern drainage systems were built to cleanly and effectively remove sewage from London.

From the mid-18th Century to the early 19th Century, another major innovation brought to London by the Industrial Revolution was city lighting.  Oil lamps were the first to be used in London and by the 1790s, William Murdoch was developing a system to use coal gas in lighting his factory, which eventually led to coal gas street lamps installed at Pall Mall by Federick Albert Winsor in 1807.  Parliament then gave the London and Westminster Gas Light and Coke Company, the first gas company in the world, a charter to light the city’s streets in 1812.  By the end of 1813, Westminster Bridge was the first in the city to be lit by gas.  At the same time, the invention and proliferation of the steam engine brought railways to London, first with metropolitan railways of above-ground trains taking suburbanites into the city for work and back, then with the underground trains that would come to form the Tube.

Of course, with the factories came a new concern to London—air pollution.  As factories’ chimneys burned coal and put out thick black smoke, the amount of suspended particulate matter doubled over two centuries from the 1700s to the 1900s.  The famous black brick walls of 10 Downing Street are painted such now, but originally became that color thanks to the amount of soot that clung to it and other London buildings.  The problem grew to such magnitude that Parliament introduced the first Public Health Act in 1891 and led to smog (a mixture of smoke and fog) that caused the Great Smog in 1952.

Ultimately, though, the benefits brought about by the Industrial Revolution outweighed the issues it caused.  The problems forced solutions that improved the quality of life through new sanitation technology, health codes, building codes, building materials, public transportation, reduced crime, and more.  London eventually came to understand the needs that industry brought with it and helped the city to prepare for future growth and expansion that has continued to this day.