You are here: Home / History / All’s Well That Ends Well – How a Disease Outbreak Lead to London’s First Water and Sewer System 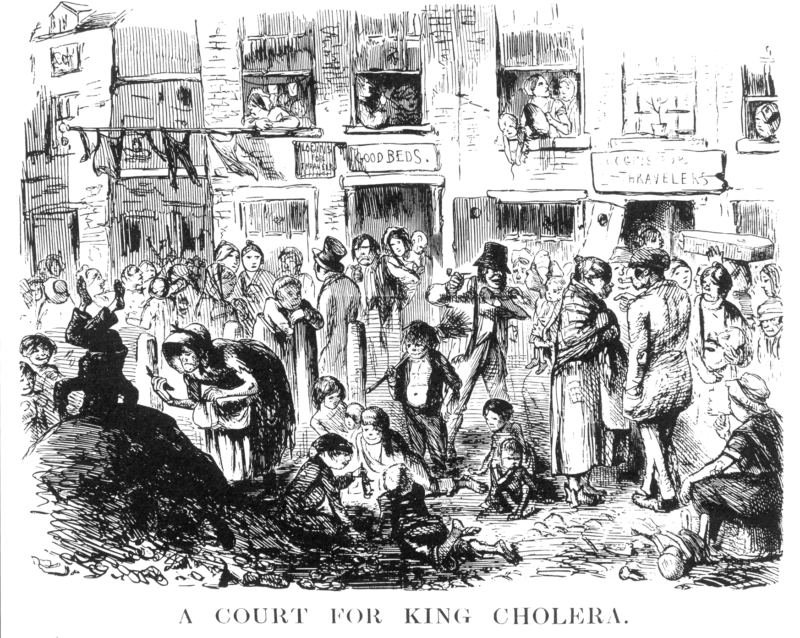 Prior to the 19th Century, utilities in London were practically non-existent.  Gas lamps still lit the city at night, raw sewage was dumped into the Thames, and people still relied mostly on wells to get water for drinking and cooking.  For the last two, the lack of any kind of system carrying in fresh water and carrying out human waste was a recipe for disaster.  With the Plague unseen in the city since 1665, the new disease on the streets was cholera.  A bacterial infection of the small intestine, cholera that produces symptoms of diarrhea, muscle cramps, and vomiting, and even today leads to many thousands of deaths per year.

From its origins in India, it spread along trade routes to Russia and the rest of Europe, including England.  The first case occurred in Sunderland in 1831 and spread to London by 1832.  It was about this time that the man who would become the leading scientist in the study of cholera encountered his first case of the disease.  John Snow was a surgeon-apothecary apprentice when he treated many cases of cholera in the coal mining village of Killingworth.  Snow continued on with his medical career, enrolling in the Hunterian school of medicine in London in 1836.  He would start working at Westminster Hospital the next year, be admitted as a member of the Royal College of Surgeons in 1838, graduate from the University of London in 1844, and be admitted to the Royal College of Physicians in 1850.  Snow then set up his practice on Firth Street in Soho where his destiny awaited.

At the time of the 1854 cholera outbreak, scientific theories about disease weren’t fully-formed.  The miasma theory, that disease was spread by “bad air” was still prevalent, and the discovery of bacteria and viruses that caused illnesses such as cholera and the plague was still some years off.  Arguably, the miasma theory made sense to scientists at the time, as the rapid industrialization of many urban centers, including London, meant that the city was filled with toxic smoke kicked out by the factories with their coal-burning furnaces.  Unlike many of his fellow doctors, Snow was skeptical of the theory and figured that cholera must have other origins, such as the raw sewage being dumped into local communities’ water supplies.

Snow finally got the chance to test his theory after a new rash of cholera outbreaks gripped the city.  Starting October 31, 1854, Soho found itself the latest target of the disease as 127 people died in or around Broad Street.  Far from the happening neighborhood of restaurants, shops, and pubs it is today, Broad Street was mostly full of slums with a communal well from which the neighborhood derived its water.  Through conversations with local residents, John Snow was able to trace the outbreak of the disease to the well.  He compounded his research with local hospital records, and through microscopic examinations proved inconclusive, Snow persuaded local authorities to shut down the well, which in turn drastically reduced the number of cholera cases.

John Snow used the research he collected to propagate his theory that contaminated water was largely responsible for the spread of cholera in London.  Combined with the efforts of Michael Faraday, who advocated the development of a separate sewer system instead of using the River Thames, the city ultimately began to develop better methods of providing clean drinking water and disposing of human waste.  London passed the Metropolitan Water Act in 1852 (though its implementation was too late for the 1854 outbreak) and hired Joseph Bazalgette to design its sewer system beginning in 1864.  As the germ theory gained in prominence, disease in London dramatically fell as new methods and technologies were invented that formed the basis of the public utilities many Londoners enjoy today.