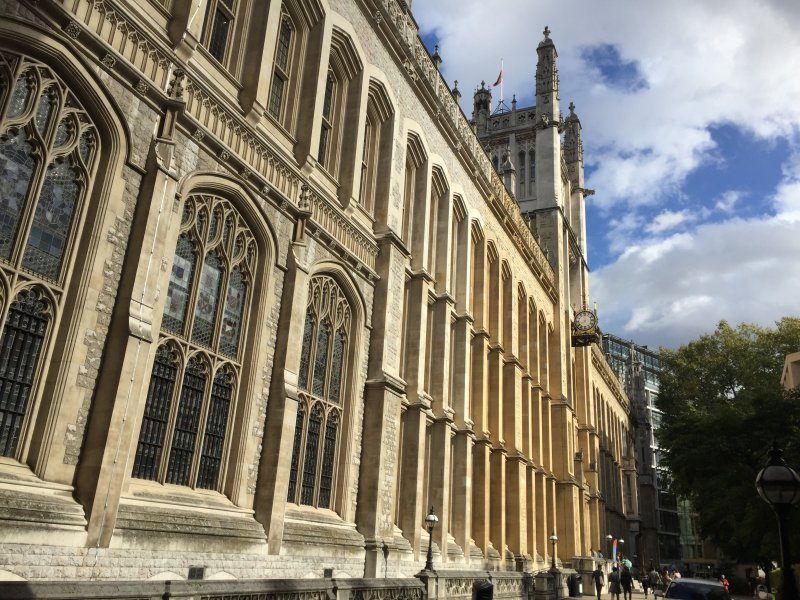 A university degree is certainly a sought-after prize in any country.  While Oxford, Cambridge, St. Andrews, and other institutions of higher learning in the UK certainly get their fair share of attention, London has quite a lot to offer as well.  Some of these schools are hundreds of years old, and others rank amongst the top schools in their respective fields.  Below we have outlined ten of what we think are the top colleges and universities in London with a little bit of their history and what makes them so special.  If you think we left out a school, let us know in the comments.

Truly the most revolutionary school on the list, at a time when universities could only be formed by royal charter or an act of Parliament, University College London’s founder came together in 1826 to open the city’s first University.  The school’s founders established it as London University and professed to allow any student to take degrees regardless of religion (British law forbade the earning of degrees by Non-Protestants).  It subsequently received a royal charter in 1836 as University College London.

Meanwhile, King’s College opened as a direct response to University College London in 1829.  Whereas UCL was a secular institution that flaunted its utilitarian values, King’s College was established under the patronage of King George IV to reassert the pro-Anglican values of the Tory government.  By the early-20th Century, all of the school’s religious requirements (save tests for theology faculty) were eliminated.  One of the best places to visit is the King’s College Chapel on the Gray’s Campus, which is Grade I listed.

What we call the University of London is a confederation of seventeen member institutions amongst the city’s colleges and universities, including both UCL and King’s College.  It was established by royal charter in 1836 as a degree-granting body for the two schools and “other such institutions”.  Today, some of the member institutions operate independently and grant degrees under their own power.  Members are also able to become full universities in their own right without leaving the University of London.

Occupying the former grounds of the Old Royal Naval College, the University of Greenwich was founded in 1890 as Woolwich Polytechnic, the second-oldest polytechnic institution in the United Kingdom (behind The London Polytechnic, now the University of Westminster).  It merged with Hammersmith College of Art and Building in 1970 to become Thames Polytechnic and received university status in 1993, shortly afterwards moving onto the grounds formerly occupied by the Royal Navy.

The Royal Academy of Dramatic Art is the premiere drama school for the United Kingdom.  While acting had existed as a profession for hundreds of years, there was little to no formal training prior to Sir Herbert Beerbohm Tree founding RADA in 1904.  George Bernard Shaw was one of the institution’s first lecturers and even donated the proceeds from Pygmalion to RADA.  Today, it has a long and distinguished list of alumni, and the current President is Kenneth Branagh.

Brunel is one of the most recent entrants to this list.  It was granted a royal charter in 1966 and, as such, is often referred to as one of the “plate-glass universities”, a term that refers to the modern design of the universities’ buildings.  Prior to the charter, it was known as Brunel College of Technology.  It has had a somewhat controversial history due to its conservative nature and perceived profit motivation and its decision to grant an honorary degree to Margaret Thatcher was protested by faculty and students in 1996.

The Royal College of Art is the second-oldest college for the arts in London.  It was established in 1837 as the Government School of Design in Somerset House and went through a couple of name changes and expansions until becoming the RCA in 1896.  It began to incorporate more design courses into the curriculum around this time and today includes a wide range of study areas from fashion to architecture.  In July it launched RCA 2020, an online graduate exhibition showing off the best work by RCA graduates from around the world.

One of the top schools for economics in the world, the London School of Economics and Political Science (more commonly referred to as the London School of Economics or LSE) opened in 1895 with the purpose of advancing the goals of the British socialist Fabian Society.  The LSE joined the University of London in 1900 as its premiere economics institution and established the University’s first social science degrees, Bachelor of Science (Econ) and Doctor of Science (Econ).

The Royal Academy of Music is both the oldest school of the arts and oldest conservatoire in the United Kingdom, having formed in 1822.  The RAM nearly shuttered in 1866 before its new president put it back on stable financial footing.  It has expanded greatly since that time and offers programs for students as young as infancy all the way to doctorate degrees.  The RAM has produced some of the world’s best composers, and musicians and visitors to campus can check out its museum at the York Gate building to learn more about its fascinating history.