You are here: Home / History / London’s Pandemic History – From the Black Death to the Spanish Flu 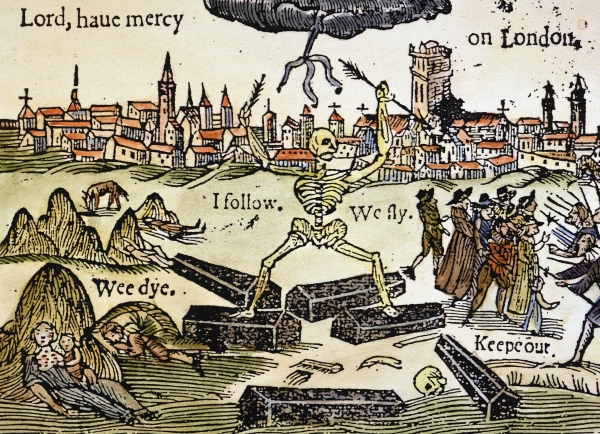 The ravages of disease are nothing new to London.  Even as the city deals with the threat of COVID-19, it has been able to learn from the pandemics of the past going back to Anglo-Saxon times.  Black Death ravaged Greater London as it did most of Europe for centuries, and smallpox, flu, and cholera have all plagued the city at one point or another.  The first recorded plague in the British Isles took place in 664 AD and was said to last some twenty-to-twenty-five years.  A bishop of London recorded its effects on a monastery of Barking in Essex in 676 AD, which is very likely to have been Barking Abbey.   A “great fever” struck the city in 962, according to The Anglo-Saxon Chronicle.  These seem to have been the only major incidents of pandemic (not caused by famine) in the city prior to the coming of the Black Death in the 14th Century.

Beginning in 1348 and lasting until 1665, London was beset by roughly forty different outbreaks of disease.  Otherwise known as the Black Death, the Bubonic Plague was likely brought to London by traders, though more accurately, by the fleas that traveled on rats which had snuck onboard the traders’ ships.   Bubonic Plague had a mortality rate of 60-80% and the first time it struck the city, it killed approximately 40,000 Londoners, which was about half the city’s population.  Plague pits were built to help bury the dead, and occasionally these are still unearthed during construction in the city.  Following the end of the first wave of plague, Parliament fixed wages to pre-plague levels, which was one of many factors that led to the Peasants’ Revolt that marched on London, demanding an end to serfdom.  Interestingly enough, the term “Black Death” was a name that came about during the 19th Century to describe this outbreak and most contemporary accounts refer to it as “The Great Pestilence”.

From then and for the next couple of centuries, the plague would come back periodically, and the city began to institute regulations to handle the outbreaks.  In 1518, the government required infected homes to hang a bale of hay outside for forty days, and people from infected homes had to carry a white stick when they went out to inform others to stay away (an early form of social distancing).  Other rules included the painting of crosses on the doors of infected homes, burying the infected at night, and ringing a bell for forty-five minutes as a reminder to others to obey the rules.  The second-worst outbreak hitting the city in 1563 that killed 24% of London’s population.

The last major outbreak, known as the Great Plague of London, then took place in February 1665, which ended up killing 20% of the city’s population (by then approximately 100,000).  The wealthy fled the city for their country estates.  Theatres, sports, and other public events were banned to keep the disease from spreading.  It wouldn’t be until December that the wealthy returned to London.  In the aftermath, even more, people moved to London to take over the jobs left vacant by the deceased and the city’s size increased.

In the 18th Century, diseases such as influenza, smallpox, and cholera began to rear their ugly heads.  London first dealt with the flu in 1775-1776.  A lack of fresh water and sewer may have contributed to the virus’s spread, with nearly 40,000 people dying of the flu during the winter months.  The first cases of cholera came to Britain in 1831 and to London in 1832.  In 1854, a doctor named John Snow found the origin of a local outbreak coming from a water pump on Broad Street, which was one of several motivations for the city to finally get to work on Joseph Bazelgette’s sewer system.  Between the two periods of the outbreak, the city lost somewhere between 16,000 to 19,000 residents.

Towards the end of World War I (or “The Great War” as it was known then), the city’s last major pandemic until recently struck.  The first reported cases occurred in Spain in 1918, which gave the influenza the name “Spanish Flu”, though it was quickly everywhere and not as widely reported due to censorship of newspapers during the war.  The virus hit England in waves and was thought to have been brought back by soldiers returning from the battlefield.  The epidemic hit London in 1919 and resulted in many rules that we might recognize today, including coughing or sneezing into a handkerchief, avoiding crowds, and not sharing drinking glasses.

Hospitals were taxed beyond their limit with the influx of cases, and as with the Great Plague, many places of public entertainment were shut.  In an interesting, through thoroughly unscientific move, many factories allowed employees to smoke as it was thought that could ward off the virus.  Buildings were heavily sanitized, and people took to wearing masks to help prevent the spread.  In one of the more disturbing descriptions, those who began showing symptoms often died fairly quickly, with their skin turning a slight purple due to lack of oxygen and their corpses turning black.  The government lacked any strong or centralized effort to control the spread, mostly relying on local hospitals and health boards to combat the virus, which, as mentioned previously, were pushed beyond their limits already.

In each major outbreak in the city’s history, our ability to learn preventative steps has been a key to combating a virus.  Social distancing, the closing of non-essential businesses, and personal protective equipment are not new to battling these pandemics, though the science has increased dramatically since the world’s last major disease.  Treatments, vaccines, preventive rules, and government institutions have all improved since the 1918 influenza epidemic, helping us to better confront the spread of illness.  With the COVID-19 virus having a roughly similar mortality rate as Spanish flu (around 2.5%), it’s worth noting that the number of survivors is likely to be greater based on what we have learned, so long as we observe the rules laid out to prevent spread and scientific technology produces the equipment, the tests, and the vaccines to help us identify, threat, and vaccinate against this new virus.