You are here: Home / Guides / Top 10 London: Top Ten Things to See and Do in Sutton 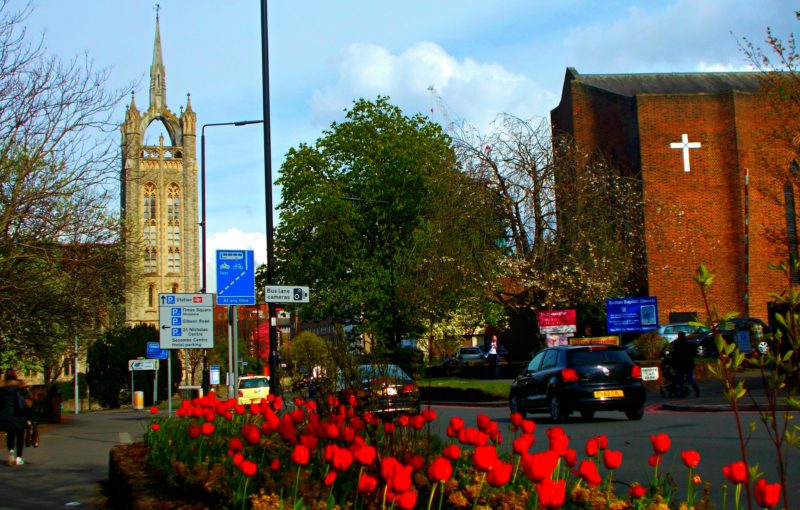 On the furthest reaches of Greater London, the Borough of Sutton is the pinnacle of suburban London.  As such, things might seem a little sleepy this far away from the center of the city, but nothing could be further from the truth.  You can find pretty fun things to do all over the borough in Cheam, Carshalton, and the eponymous Town of Sutton.  Shopping, nature, drama, and more opportunities are available, and we’ve outlined our ten favorite things to do in Sutton.

Managed by the Sutton Borough Council along with the Sutton Ecology Center, the grounds are a 1.3 hectare Local Nature Reserve and Site of Borough Importance for Nature Conservation.  Visitors can learn more about local wildlife habitats and gardening tips.  There’s also a trail you can take to immerse yourself in the local environment.

The River Wandle is the largest river in southwest London and offers plenty of activities itself.  Perhaps the best of these is the Wandle Trail that takes you not only down the river’s winding path but through history, past many mills and bridges that made this an important commercial thoroughfare.  The Wandle Trust has several pamphlets that can help you decide where to go.

Perhaps the largest shopping center in the borough, St. Nicholas is a mall with a wide variety of shops.  Topshop, Primark, Claire’s, Levi’s, and more can be found here along with some uniquely British brands.  The shopping center also offers dining options as well as an Empire Cinema if you feel up for a movie.  Whatever you’re in the mood for, there’s a good chance you can find it here.

St. Mary’s is one of the oldest churches in Sutton, a Grade II listed structure built in Beddington between the 14th and 15th Centuries.  Some elements of the church, such as its Purbeck marble font, are even older and dates back to the 12th Century.  Excepting when there is a service going on, the church’s tower is also open so visitors can climb and see the bells as well as an architect’s drawings showing the age of various parts of St. Mary’s.

The Cock & Bull is easily one of the best pubs in Sutton.  It’s owned by Fuller’s, and as such, the taps feature several of their ales as well as a classic pub interior and a rich food menu of British classics.  More of a family restaurant than a dingy local, it’s a good place to experience pub life without a lot of noise or bother.

Whitehall is a Grade II listed house museum in Cheam Village.  The house itself was built around 1500 and the interior features a mixture of the Georgian, Victorian, and Edwardian periods.  Inside you can learn more about the house itself as well as the people who once lived here and what their lives were like.

One of the leading community theaters since it opened in 1991, the Charles Cryer Theater was originally built as a public hall for the Village of Carshalton in 1874.  For years afterward its renovation into a theater, it put on a number of well-known productions until it was forced to close thanks to Council budget cuts in 2014.  It has since reopened as a community arts center in late-2018.

The Mayfield Lavender Farm is a 25-acre lavender field created to help restart that industry in the area.  Walking amongst the flower is not only beautiful, but the scent is calming as well.  The farm is open to visitors from June 1 to September 30 and features a shop and restaurant, the latter featuring a lavender afternoon tea.  Cost is only £1 and goes towards the farm’s upkeep.

Unquestionably a gorgeous manor house, Honeywood is a Grade II listed house museum that comes right up to the Carshalton Ponds.  In addition to exhibits on the home’s history, Honeywood also features rotating exhibits with the latest being on the work of local artist Horace Mann Livens and other areas of history.

Henry VIII built Nonsuch Palace as a royal home and is arguably one of the grandest of his works, naming it “Nonsuch” as “no such” place was like it.  Unfortunately, it remained unfinished when he died in 1547 until Queen Mary I finished it.  The original home was destroyed during the English Civil War and the current home, Nonsuch Mansion, was built over it.  The house is available for hire and dining, and the park is one of the most beautiful in Sutton.