You are here: Home / Culture / Buildings / Not Falling Down: Ten of London’s Beautiful Bridges and Their Fascinating Histories

Bridges don’t just connect places, but they connect people.  Since the earliest days of civilisation, we’ve used them to access new areas, trade with the people there, and travel further than we once thought imaginable.  With a city such as London situated on the River Thames, bridges are a necessity, and thousands of people cross them every day on foot, by bicycle, or by car.  Each of London’s bridges has a unique history and design that makes it worth visiting. 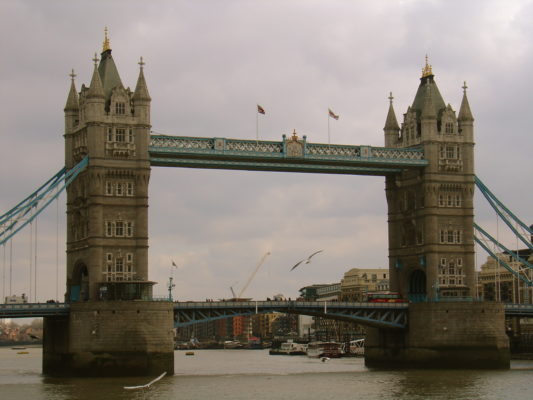 The most iconic bridge in London, Tower Bridge is a bascule and suspension bridge opened in 1894.  The bridge connected Horselydown Lane (now known as Tower Bridge Road) on the south bank with Iron Gate on the north bank.  At first, the upper-level walkways that connected the two towers were open to the public, but they developed a problem with crime and were closed from 1910 to 1982.  The bridge was a major part of the 2012 London Olympics celebrations and was decorated with the Olympic rings.

Perhaps one of the first bridges built over the Thames, the original wooden version was built about 50 AD.  The most famous version of the bridge that was used in the nursery rhyme was built by King Henry II as part of his penitence for the murder of Thomas Becket by his knights.  Eventually it became saturated with buildings (some 200 by the Tudor period) on top that ultimately proved to be a fire hazard and were torn down after an act of Parliament in the 18th Century.  Another bridge was built in the 19th Century, and when it came time for its replacement, it was sold in 1968 to Robert McCulloch, who had it shipped to Arizona where he rebuilt it.  The current bridge opened in 1973 and is comprised of three prestressed concrete box girders. 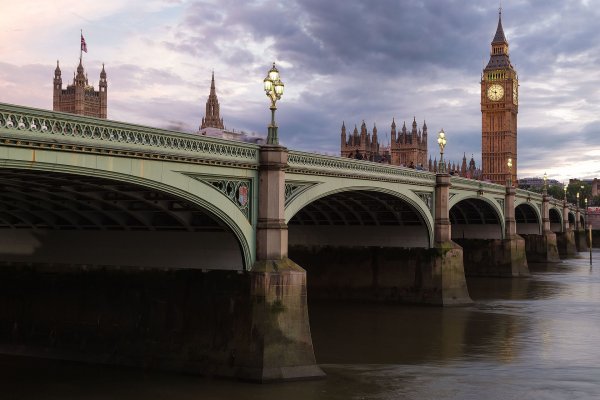 Besides the Tower Bridge, Westminster Bridge is one of the most iconic in the city, if only because one end of it connects to the Palace of Westminster and Elizabeth Tower (known to most tourists as Big Ben).  The city corporation actually opposed the building of a bridge here in the 18th Century, but by the 19th, traffic was too much for London Bridge to handle, so Westminster Bridge was constructed in 1862.  It was designed by Thomas Page, who was also responsible for the Palace of Westminster.  Fittingly, the bridge is also painted green to match the benches in the House of Commons. 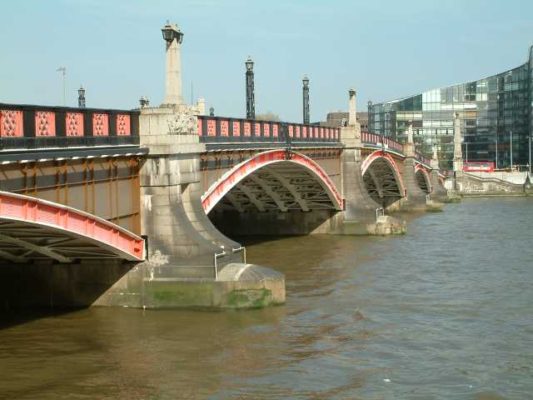 Further down from Westminster Bridge is Lambeth Bridge.  The first Lambeth Bridge was a suspension bridge that opened in 1860, but over the years proved to be somewhat unsound that it was first closed to carriages and only made open to pedestrian traffic in 1862.  It then became so corroded that it closed to vehicles in 1910.  The current bridge opened in 1932 as a five-span steel bridge that is decorated with pine cones and its details painted red for the benches in the House of Lords. 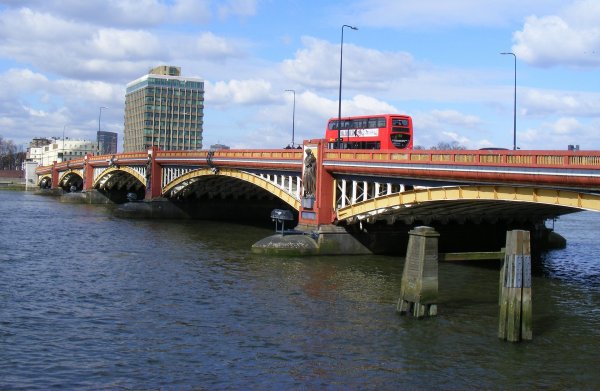 Originally known as Regent Bridge, Vauxhall Bridge opened in 1916 and is certainly one of the most colourful in the city.  During the construction, the London County Council opted to have several statues constructed and placed along the bridge supports that represent Agriculture, Architecture, Engineering, and Pottery on the upstream side, while the statutes on the downstream side represent Science, Fine Arts, Local Government, and Education.  Another bridge was proposed to replace it in 1963, based on the Crystal Palace and referred to as the Crystal Span, but the LCC didn’t want to pay the price tag of £7 million for it, and so the current Grade II listed bridge remains.

Albert Bridge was completed in 1873 as a cable-system bridge in the style of the Ordish-Lefeuvre system.  It’s one of only two bridges that were built using this system, the other being the Franz Joseph Bridge in Austria.  The bridge was authorised in 1864, but took six years for construction to finally get started thanks to plans for the Chelsea Embankment, and then costs and other issues meant it took three years to build instead of one.  At first Albert Bridge suffered from the same stability issues as many early suspension bridges, and had a tendency to wobble.  The problem was so noticeable that soldiers from the Chelsea Barracks were ordered to break step when going over it.  The bridge was also originally a toll bridge and contains a pair of octagonal toll booths that are the last remaining ones in the city.

Grade II listed, Kew Bridge opened in 1903 and has probably been congested since then, due to it being a major connection between the A205 and A406 in West London.  It’s actually the third bridge to be in this location and was designed by John Wolfe-Barry and Cuthbert A. Brereton.  The Kew Bridge Studios operated nearby during the silent era of film, and the bridge itself has been depicted in many paintings over the last century. 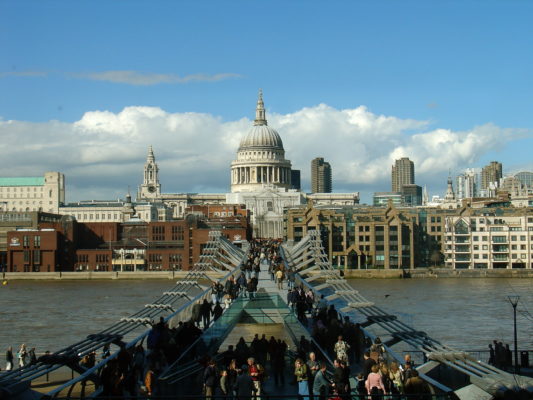 If you haven’t been to London, you might know this bridge from its appearance in the Harry Potter films.  The Millennium Bridge is a suspension footbridge that was completed in the first year of the new millennium and much like Albert Bridge, it experienced some wobbling at first and had to be closed for another two years to get the problem sorted.  Additionally, the bridge also featured in the film Guardians of the Galaxy, as part of the film’s doubling London for the planet Xandar. 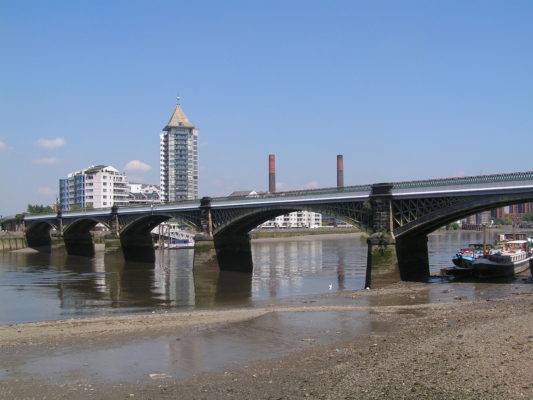 We couldn’t let them all be vehicle and pedestrian bridges, could we?  Battersea Railway Bridge was designed by William Baker, who was the chief engineer of the London and North Western Railway.  Opening in 1863 and constructed at a cost of £7.5 million in today’s money, it’s an arch bridge with five spans that have had to be refurbished a couple of times to keep it in use.  The Diamond Jubilee Footbridge was proposed to commemorate the event, and its placement next to Battersea Railway bridge recognises it as the spot where Queen Elizabeth II boarded a ship for the start of the Diamond Jubilee river pageant.  Construction began last year and is designed to handle 1.2 million cyclists and pedestrians per year. 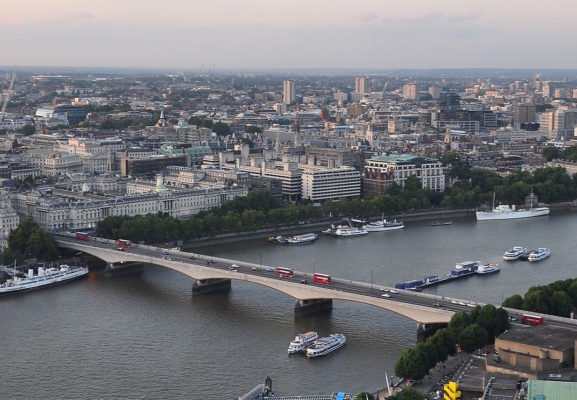 Waterloo Bridge predictably is one of many memorials in London to the victory at the Battle of Waterloo in 1815.  The first bridge opened in 1817 as a toll bridge, while the current bridge was designed by Sir Giles Gilbert Scott and opened in 1945.  It was the only Thames bridge to be bombed in WWII and had a limited opening in 1942, but didn’t open fully until the war was over.  In fact, the war wasn’t quite done with the bridge, as the discovery of an unexploded German munition this year closed down Waterloo and Westminster bridges until it was defused.