You are here: Home / Guides / Top Ten London Top 10 Things to See and Do on the South Bank 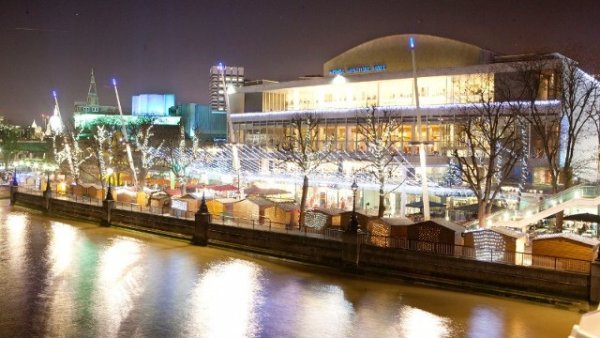 When the City of London put heavy restrictions on such entertainments as the theater and bear baiting during the Medieval Period, everything that was now illegal or frowned upon decided to move across the Thames River to South Bank.  Now home to both legal and reputable forms of entertainment, South Bank offers visitors a lot to see and do from theater to rides to life itself.  Whatever fun you’re looking for in South Bank, this neighborhood has it.  We’ve outlined our top ten favorites, but you can let us know your own in the comments.

One amongst many noticeable landmarks on the Thames, Oxo Tower is a multi-use building that was originally intended to be a power station before Liebig Extract of Meat Co. acquired it and used the art deco design of its windows to get around city’s ban against advertising its famous Oxo cubes.  Today it’s home to a fantastic restaurant (seen in the film Thor: Ragnarok) that provides an excellent view of the city as well as many shops.

Cinema fans will want to check out BFI Southbank, which is one of the UK’s leading cinemas thanks to being run directly by the British Film Institute.  There are four movie theaters that show everything from great screen classics to artsy independent films and everything in-between with some of the best projection and sound equipment in the country.  Additionally, it’s home to the BFI’s Reuben library, which houses any number of print articles, books, and films concerning the moving image since its inception.

Pretty much the biggest tourist trap in South Bank, the London Dungeon is still worth it for its opportunity to let you delve into the goriest and most terrifying moments in the city’s history.  The dungeon features several notorious persons and events from London’s past, including Jack the Ripper and Guy Fawkes as well as the Black Death and the Great Fire.  Of course, it’s not too scary as it’s all meant to be in good fun, so don’t feel too terrible about bringing your children along.

Part of Southbank Centre, one of the city’s preeminent performing venues, Royal Festival Hall is a dance and concert site that seats about 2500 people.  In addition to the performance hall, the building also has the Clore Ballroom, the Poetry Library, the Spirit Rooms, and several bars, cafes, and restaurants.  There are also extensive libraries dedicated to sound recordings and visual art, so be sure to check out everything the Royal Festival Hall has to offer.

Dedicated to history’s most famous nurse, the Florence Nightingale Museum is appropriately enough located in St. Thomas’ Hospital.  Of course, much of the museum’s collection focuses on Nightingale’s life, but it also takes great care to show you the continuing legacy that she had on the profession of nursing.   Presently the museum has an exhibit focusing on the Nightingale Training School, that produced some of the first generations of nurses using her methods as well as exhibits on the Crimean War and the Spanish Flu outbreak of 1918.

Lambeth Palace is the official residence of the Archbishop of Canterbury, the Church of England’s highest position (not counting the Queen who is the head of the church).  The Community of Saint Anselm, a religious order under the Archbishop’s patronage, also calls Lambeth home.  Its importance and Tudor-style architecture has netted it Grade I listed status, and the palace is available to tour so you can learn everything about its 800-year history and relationship with the Church of England.

Sea Life London Aquarium opened in 1997 and has more than 500 species of marine life spread out over 14 different themed zones.  From an amazing Rainforest Adventure to the Seahorse Kingdom, there’s a lot to explore and opportunities to get up close and personal with the aquarium’s inhabitants through portholes and tunnels that allow you to be fully immersed in their lives.  You may wonder what to do if you’re traveling in London without kids, but the aquarium is fun for all ages.

This 1,000-seat, not-for-profit theater has been part of the drama scene in the city since 1818.  Its long history has earned it a pedigree that sees some of Britain’s best acting talents cross its stage.  The theater sees any number of classic and contemporary works during its theatrical runs, and the Old Vic’s current schedule includes A Monster Calls, Sylvia, 17c, Wise Children, and A Christmas Carol.  Whatever you’re in the mood to see, be sure to check out the schedule, and you might even catch a famous face on stage or in the audience.

One of your best views of London will come courtesy of the Coca-Cola London Eye, a cantilevered observation wheel that is the tallest of its type in the world (although there are Ferris wheels that are taller).  Each of the 32 pods provides a wonderful 360-degree view of London on a ride that takes 30 minutes for a complete revolution.  To enhance your experience, you can reserve a private pod or purchase a champagne flight.  Next, to the Shard, you’re probably not going to get a better visual layout of the city anywhere else.

Of course, the number one location on this list is one that will take you to all the others.  This pedestrian thoroughfare takes you from Westminster Bridge all the way up the South Bank side of the Thames to the Royal Festival Hall, touching several landmarks on this list including the hall, the London Eye, the London Dungeon, the aquarium, and more.  Of course, if you want to travel the entire trail and cross the Millennium Bridge to St. Paul’s Cathedral.