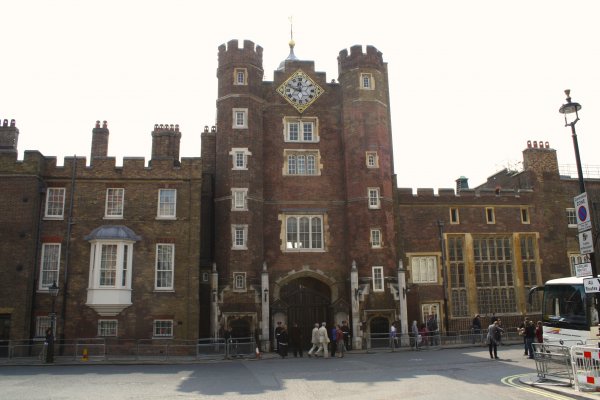 St. James’s Palace may not be a palace where Queen Elizabeth II actually resides, but it still holds a very important function for the government as the de facto seat of the monarchy.  Even when ambassadors are received today, they are “admitted to the Court of St. James”.  It also still provides a place to live for several members of the royal family and is the ceremonial meeting place of the Accession Council.  Built in the 16th Century, it is one of the oldest castles still in use by the monarchy and has quite a history.

King Henry VIII was the one to commission the palace originally, and its site was formerly that of a leper hospital for women dedicated to St. James the Less, from whom the palace gets its name.  Henry’s purpose in building St. James was to have it as a country seat, which can be hard to believe in modern London, though at the time it was quite a pastoral area of the city.  Though he preferred the Palace of Whitehall, St. James was meant as a more relaxed residence where he could escape from the rigors of court.  As the hospital had been a gift from King Edward I, Henry simply took it back and razed it for his new country house.

Construction began in 1531 and lasted until 1536.  One of the most striking features of the palace is the four-story red brick gatehouse with octagonal towers on either side.  Similar to Whitehall, the palace was arranged around several court yards such as the Colour Court, the Ambassador’s Court, and the Friary Court.  Unlike Whitehall, much of the palace still exists today, including the Chapel Royal, which held a coral service every Sunday at noon that was well-attended by the aristocracy when the monarch was in residence.  Henry also sequestered 300 acres of land nearby for a private hunting ground, land that eventually became the basis for St. James Park.

Though it wasn’t Henry’s main residence, after his death, future queens and kings would make even more use of St. James’s Palace.  Both Queen Mary I and Elizabeth I used the palace as a residence during their reigns.  Mary signed a treaty to surrender Calais while under the palace’s roof and Elizabeth staid here when there was a concern about the Spanish Armada attacking.  When Whitehall burned down in 1698, it became the primary residence of the monarch until Buckingham Palace took precedence.  King Charles I spent his last night there before his execution and his sons, King Charles II and King James II, were born there.  King William IV was the last monarch to use St. James as his de facto residence, with Queen Victoria choosing Buckingham Palace instead, making it the principal royal residence from that point forward, though she did marry Prince Albert within the walls of the Chapel Royal.

Even though St. James’s Palace ceased to be a principal residence, it continued to do royal business.  Levees, or personal audiences with the monarch, continued to be held there until 1939.  In 1941, the representatives of the governments of the United Kingdom, Canada, Australia, New Zealand, Belgium, Czechoslovakia, France, Greece, Luxemburg, Netherlands, Norway, Poland signed the first of six treaties that eventually led to the creation of the United Nations after World War II.  Princess Diana stayed there before her wedding, and her coffin was kept in the Chapel Royal before her funeral in 1997.

Today, St. James’s Palace continues to serve as a residence for the royal family and to house many of their offices, making it closed to the public.  It also hosts official receptions for visiting heads of state and charitable events for those organisations of which the royal family are patrons.  What’s more, the offices of the Royal Collection Department, the Marshall of the Diplomatic Corps, the Central Chancery of the Orders of Knighthood, the Gentleman at Arms, the Yeomen of the Guard, and the Queen’s Watermen are all within the palace.  Even though it is no longer the monarch’s residence, it continues to hold an important place for the sovereign.