You are here: Home / Culture / Buildings / Great London Buildings: The Palace of Westminster – The Houses of Parliament 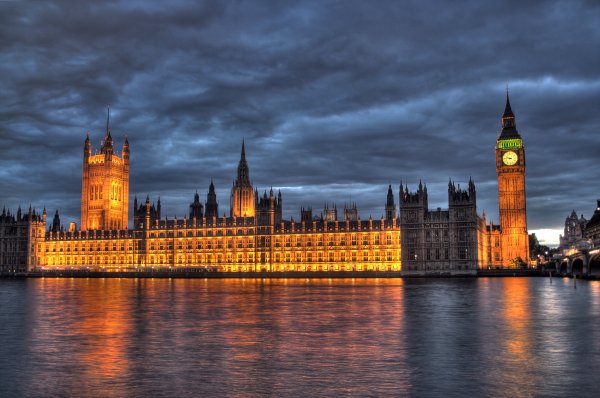 Unquestionably one of the dominating features of the London skyline, the Palace of Westminster has always been an important centre of government. Going back to the middle ages, the land on which the current palace sits was called Thorney Island, and its location in what we know as Westminster gave it strategic value in virtually the middle of the area and along the banks of the Thames. Canute the Great made Thorney Island his base of operations when he ruled in the 11th Century and was followed by Edward the Confessor, who built a palace there at the same time he was constructing Westminster Abbey. When William I conquered London, he made little use of Edward’s palace, preferring instead to construct the Tower of London.

The original hall for the Palace of Westminster was built by his son, William II. Construction began in 1097 and finished in 1099. At its construction, the hall was the largest in Europe and it remains so to this day with a total floor area of 1,547 square metres. Its size made it a major location for feasts and receiving important guests, which became increasingly important as more government offices started relocating to Westminster. With the palace serving as a royal residence, it quickly became the centre for English government, a fact that was even further cemented when the first parliament, the Model Parliament, met at the palace in 1295.

However, the Palace of Westminster’s status as a residence would not last forever. In 1512, the residential (or “privy”) section of the palace caught fire, which was the perfect excuse for King Henry VIII to leave the palace and take up residence elsewhere. With the abandonment by the monarchy, Parliament and other government agencies took increasing control of the grounds. Parliament began meeting there regularly starting in 1707, though the fire of 1512 wouldn’t be the last that the Palace of Westminster would suffer.

The Great Fire of 1834 managed to destroy a majority of buildings at the palace and surrounding homes. The only parts of the Old Palace that survived were the hall, the Undercroft Chapel, the cloisters, the Chapter House of St. Stephen’s, and the Jewel Tower. The following year, a Royal Commission began the process of rebuilding the palace. There was a bit of a disagreement as to what style the new palace should take. Neo-classical was the popular style of the time, but it was heavily associated with the American White House and thus the revolution, so the government opted for a Gothic style instead that it felt was more conservative.

There was a public competition to determine the ultimate design on the Gothic guidelines in 1836. Of the 97 entries that the government received, the winner was Charles Barry. Barry’s Gothic design won, in part, because it proposed a building that would be in keeping with the surviving palace buildings. Construction began in 1840 and was estimated six years and £724,986, though it took thirty years and cost £2 million. Despite all the construction that was still ongoing, the House of Lords first took their seats in the new palace in 1847 and the House of Commons followed them in 1852. A few years later in 1859, Big Ben would be installed in Victoria Tower, providing London with one of its biggest landmarks and most recognisable sites.

Despite its design that harkened back to the past, the Palace of Westminster was at the forefront of technology. Electric lighting was first installed in the House of Lords in 1883 and nearly thirty years later in the House of Commons. Moving further into the 20th Century, while the palace was fortunate to avoid destruction during WWI, the London Blitz was not as kind. Parliament had, in fact, moved mostly into Westminster Abbey from 1940-1941 out of concern for the bombs. This fear was proven valid when German bombs destroyed the House of Commons chambers over 10-11 May 1941.

However, resilient as ever, the chambers were rebuilt and construction at the Palace of Westminster has been mostly confined to restoration efforts in the decades since. Even more renovations will be needed in the future and a recent report suggested that for Parliament to remain in the palace during renovations would cost £7.1 billion, while a cheaper option would involve the MPs and the Lords to relocate for a period of six years. It remains to be seen which option they will choose.