You are here: Home / History / Ten Interesting Facts about the Great Fire of London 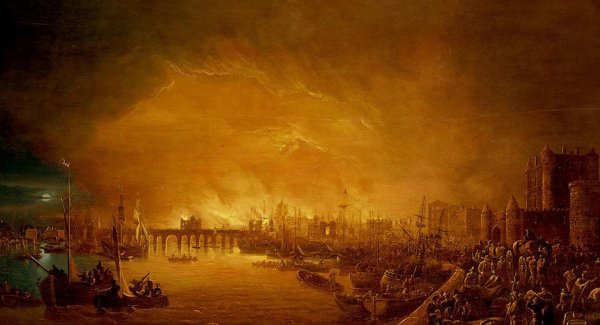 On September 2, 1666, furnaces that weren’t quite out in the home of baker Thomas Farriner managed to start a fire that raged for four days and destroyed much of the City of London.  The Great Fire was one of the most seminal events in London’s history.  It has been recounted in dozens of works including Samuel Pepys’s Diary and led to a major construction project that included St. Paul’s Cathedral.  Of course, one of the city’s most important events has a ton of interesting facts, and we’ve outlined ten of them for your consideration.

If You Can’t Stand the Heat

In 1979, archaeologists excavating a destroyed shop on Pudding Lane uncovered a piece of pottery that had *melted* in the fire.  Scientists estimated that this meant the fire burned as high as 1700-degrees Celsius or 3,092-degrees Fahrenheit.

Not a Good Time for London

While the fire devastated the city in 1666, the preceding year hadn’t been that much kinder to London.  In 1665, the Bubonic Plague ravaged the city and was estimated to have killed over 100,000 people, or 15% of the city’s population.  Amazingly, the Great Fire only killed 6 people but destroyed approximately 13,200 homes and 87 churches.  On the positive, the fire is thought to have killed a great many of the rats and fleas that carried the plague.

Baked Goods at the Beginning and Ending

While the fire started in a baker’s shop on Pudding Lane, it is said to have been extinguished on Pye Street.

At the time, the only method the city had of stopping fires from spreading was by creating firebreaks.  This involved the tearing down of buildings around those that were already on fire to prevent spreading.  The idea was that a wide enough break would keep the fire from leaping houses; however, many of the owners around Farriner’s home refused.  Additionally, Mayor Thomas Bloodworth was consulted on this and he also refused to tear down some of the surrounding houses as the buildings were rented and the owners could not be found.  This permitted the fire to spread quickly in its early moments, becoming a raging firestorm by that afternoon.  Bloodworth is famously quoted as saying “Pish! A woman could piss it out!”

Not That It Did Much Good

Even with the firebreaks, heavy winds sometimes caused the fire to jump breaks of twenty buildings.  By the fifth day, the fire was burning homes on London Bridge, but a natural gap in the buildings was able to stop the fire from reaching the other side of the Thames.

Many believed that the fire started as the work of a foreign agent.  For whatever reason, a French watchmaker named Robert Hubert confessed to having started the fire and was executed for it.  It was later discovered that he was not in England at the time the fire started and didn’t return until two days into the blaze.

One of the immediate effects of the fire was a city-wide ban on thatched roofs, as it was believed they helped the fire to spread more quickly.  The ban remains in place to this day.  Such is the effect of the ban that when Shakespeare’s Globe was built in the 1990s, it had to have special permission to have a thatched roof to be in keeping with the original theater.  The previous Globe Theater had been torn down in 1644, 23 years before the Great Fire.

Many City of London residents attempted to save what they could and flee across the bridges, hoping that the River Thames would shield them from the fire’s spread.

The Monument to the Great Fire of London stands in Pudding Lane near where the fire began.  It was built from 1671 to 1677 and designed by Christopher Wren, who rebuilt much of the city after the fire, including the current St. Paul’s Cathedral.  Today, the Monument is the largest isolated stone column in the world, reaching 202 feet tall.  It is possible to go inside the monument and climb its 311 steps to the viewing platform.

With some 436 acres of the city destroyed, it took approximately 50 years to rebuild.