You are here: Home / Site News / Featured / London History: One Little Spark – A Short History of the Great Fire of London in 1666 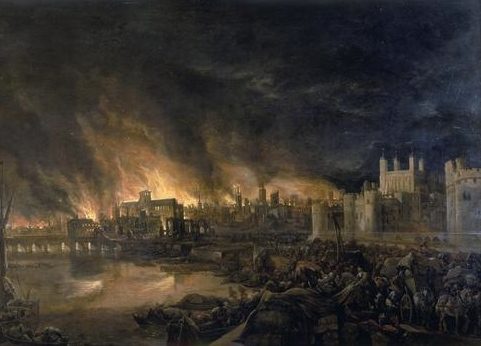 It’s almost impossible to conceive today that a fire can rage for three days, at least, in the city. We see wild fires in the American west go for days upon days, but you never see one last that long in a city. When one building catches fire, the fire department shows up within minutes to put it out before it can spread and endanger any other buildings, but that wasn’t so in 1666.

The Fire started in the bakery of Thomas Farriner on Pudding Lane in the early morning hours of Sunday, 2 September. The generally accepted idea is that Mr. Farriner’s maid forgot to completely put out the ovens the night before. The heat from the ovens caused sparks to ignite the Farriner home. While the maid attempted to escape, she was unsuccessful, and became one of the few casualties of the Fire.

It spread quickly due to a combination of factors. For one, a vast majority of the buildings in London were made of wood, which was a much cheaper building material than stone. Second, in September, London is pretty dry (hard to believe, I know). Third, high winds helped fan and spread the flames from building-to-building.

Further, the major firefighting technique of the time was creating “firebreaks” between buildings by demolition, thus creating space and depriving the fire of fuel. However, the Lord Mayor of London, Sir Thomas Bloodworth, delayed action in creating the firebreaks, costing citizens their property, lives, and livelihoods. While the Fire started in the early morning on Sunday, Sir Bloodworth didn’t begin demolitions until Sunday night, by which time these measure were insufficient to stop the fire. His famous last words, so to speak, was that “A woman could piss it out”. 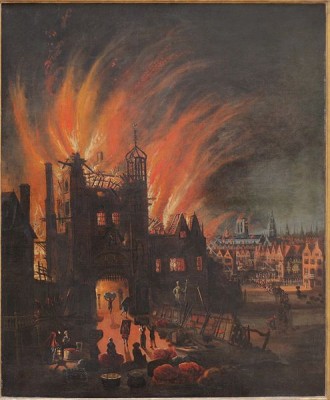 The winds helped the Fire spread North and West, destroying thousands of buildings, including 13,200 homes, 87 parish churches, the buildings of many city officials, and even Old St. Paul’s Cathedral. It’s said that the Fire burned so hotly that the lead roof of Old St. Paul’s melted and liquid lead ran through the streets. There was a great concern that the Fire would spread across the River Thames from the houses on London Bridge, which had caught fire in 1632 and were thus noted as a notorious death trap. The wind also carried many cinders far away from the fire and permitting other fires to start up such that rumours spread that the fires were deliberately caused by foreigners. There was great violence against them so much that many foreigners and strange-looking persons were arrested as much for their own protection as on suspicion.

Perhaps one of the more positive things to come out of the fire is the account of it by Samuel Pepys, whose diary is now considered a great work of literature. It is regarded as one of the best first-hand accounts of the Restoration period, including the Great Plague of London, the Second Dutch War, and the Great Fire. In his diary, Pepys referred to the fire as a “horrid malicious bloody flame” with seemingly no way to stop it. 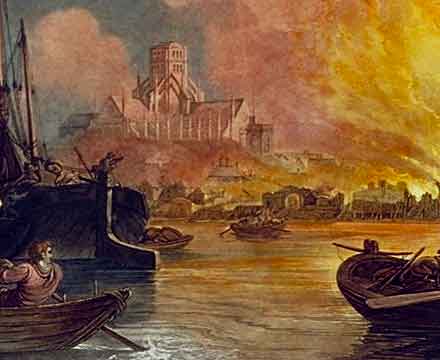 However, as the winds turned East and South toward the river and more firebreaks were made, the spread of the fire was halted and began to die down by Wednesday, 5 September. Eventually, in the search for a scapegoat, blame was played on a simple-minded French watchmaker named Robert Hubert, who claimed to be an agent of the Pope and started the Fire in Westminster, though he later changed his story to say he had started it at Farriner’s bakery. A few rebuilding plans, including one submitted by Sir Christopher Wren, were rejected and the old city was rebuilt much as it had been, with some improvements in wider streets and better hygiene. It is believed that the Fire also helped stop the spread of plague that cost 80,000 citizens the year before, burning down many unsanitary houses and other buildings. It also managed to sterilize “The Fleet”, a major tributary that served primarily as a sewer.