You are here: Home / Travel / Attractions / Fit for a King: 10 Interesting Facts and Figures about Hampton Court Palace 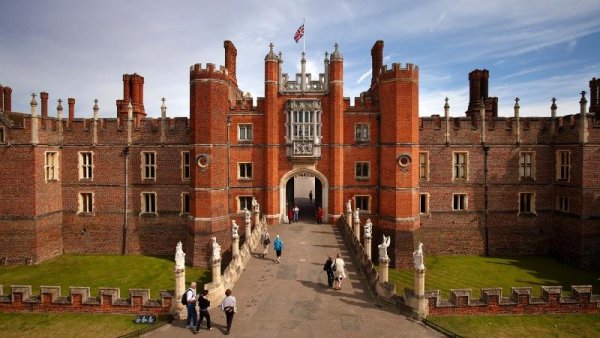 Hampton Court Palace was one of the many residences of King Henry VIII, though it was originally built for Cardinal Thomas Wolsey in 1514. However, Cardinal Wolsey’s failure to secure an annulment for Henry’s marriage to Catherine of Aragon led to the English Reformation and Wolsey saw the writing on the wall. Before the king could take the palace, the Cardinal gave it to him as a gift. Both Henry and King William III would go on to expand the palace, with the latter doing his best to make it rival Versailles.

Hampton Court Palace is one of only two of Henry VIII’s palaces that are intact today. While this fact is up for debate considering the many houses and castles owned or seized by Henry (though he didn’t live in many of the still-existing buildings), there were only two real “palaces” in which he lived. The other still-existing palace is St. James Palace, which is currently the senior palace of the Sovereign. As such, when ambassadors are admitted to the UK, they are admitted “to the Court of St. James”.

Lucky Place for a Wedding

Of Henry’s six wives, only one of them actually survived the marriage without execution, divorce, or death from other causes. This wife was Catherine Parr, whom Henry married at Hampton Court Palace in 1543.

Hampton Court was considered a modern palace when first constructed. It possessed a 36,000 square foot kitchen, a toilet area that could seat 30 people, bowling greens, and 60 acres of gardens that included tennis courts. The gardens also have the UK’s oldest surviving hedge maze, which was designed in 1700.

At its height, Hampton Court Palace employed some 600 people.

The last person to ever live at Hampton Court Palace was King George II. When his son, George III, ascended the throne, he never set foot in the palace and it went unused until Queen Victoria opened it to the public in 1838. In 1952, it achieved the honour of statutory protection by becoming Grade I listed. This fact is interesting in light of how the HBO mini-series John Adams used the palace to film Adams’ reception by George III as America’s first ambassador to Britain.

King for a Day

During the 2012 Summer Olympics, Hampton Court Palace was a venue for the Road Cycling Time Trial. Several thrones were built for the athletes in medal positions.

All the Court’s a Stage

Or at least, the Great Hall was a stage. William Shakespeare and his company, the King’s Men, performed several of their plays for King James I. In late 1603 and early 1604, the company was brought to the palace and housed there for three weeks to provide entertainment for the Christmas celebrations.

Hampton Court Palace installed a magnificent astronomical clock on the tower of the gatehouse facing the inner court in 1540. It was designed by Nicolas Cratzer and made by Nicholas Oursian. The clock is 15 feet tall and has three separate copper dials that can tell you the hour, the day of the month, and the position of the Sun relative to the Earth, as well as the phases of the moon, the age of the moon in days, and when the moon crosses the meridian, thus allowing one to predict when the Thames will be at high tide.

Much of the first phase of renovations took place when Henry came into possession of the palace. The total cost to him at the time was £18 million (or £30 million in 2010 currency).

The Chapel Royal at the palace was where Archbishop Cranmer handed Henry the list of accusations against his fifth wife, Catherine Howard. Unlike accusations against other of Henry’s wives, Catherine’s indiscretions had some real weight to them, with her already having to pay people for their silence. Needless to say, Henry didn’t take it well, had her imprisoned in the Tower of London, and then executed her on 13 February 1542.

The ten animal statues on the bridge leading to the great gatehouse are heraldic symbols that represent the ancestry of Henry and his third wife, Jane Seymour. These animals include: the lion of England, the Seymour Lion, the Royal dragon, the black bull of Clarence, the mythical tale of Beaufort, the white lion of Mortimer, the white greyhound of Richmond, the Tudor dragon, the Seymour panther, and the Seymour unicorn.