You are here: Home / Culture / Buildings / 10 Interesting Facts and Figures about Kensington Palace You Might Not Know 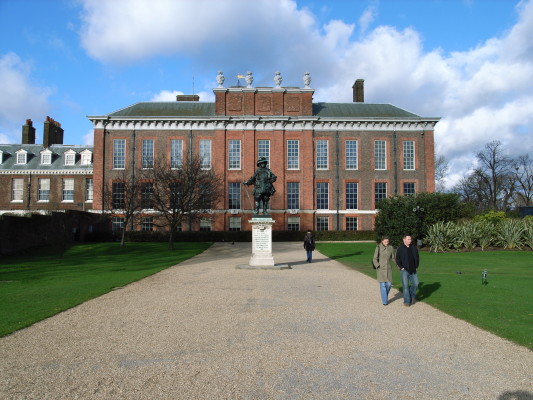 Kensington Palace, whose first royal residents were King William III and Queen Mary II, was built in 1605 by Sir George Coppin and was known as Nottingham House after Heneage Finch, the First Earl of Nottingham, purchased it in 1619. It became a royal residence in 1689 when William and Mary purchased it from the Second Earl, Daniel Finch. It has always been the home of one royal or another, even after George III left it for Kew Palace, most recently being the home of the Duke and Duchess of Cambridge. With such a history to the residence, you can be assured that many interesting facts can be found within its walls.

A Cure for What Ails You

Queen Anne moved into Kensington in part due to her husband, Prince George’s, asthma. During that time in the 17th Century, Kensington was surrounded by countryside and greenery, being a lot more rural than the Borough of Kensington is today. Their belief was that the fresh air would be good for him, whereas they felt that the Palace of Whitehall was “grimy”.

While half of the palace has long been divided into apartments for members of the royal family, the other half is open to the public as a tourist attraction. The palace is open to visitors from March through October and again from November to February. There are wonderful displays within the palace from all eras of its history.

William and Mary hired famed architect Sir Christopher Wren to begin renovating and expanding Kensington in 1689. However, when Mary died of smallpox in 1694, the construction halted. A few years later, William completed the renovations, including the King’s Gallery.

A Sad Place for Women

Unfortunately, Kensington hasn’t always been a happy place for its female royal residents. In addition to Mary’s fatal bout of smallpox, Queen Anne became pregnant seventeen times while living at the palace, but was never able to produce an heir to the throne who reached adulthood. Queen Caroline also died after her eighth pregnancy, when an umbilical hernia resulted in an ill-advised surgery. Further, Princesses Margaret and Diana were fairly unhappy during her time at the palace.

The Privy Chamber for William and Mary features themes of the Roman gods Mars and Minerva. Mars was associated with William’s military victories, while Minerva represented Mary’s wisdom and patronage of the sciences and the arts.

Not So Good News

King George II didn’t get on well with his son, Prince Frederick, at one point having him banned from Kensington. When Frederick died after getting hit in the chest with a cricket ball, the news was delivered to George as he was playing cards. George’s response to his son’s death? “Good.”

Like any good palace should be, Kensington has its fair share of ghosts. King George II is said to haunt the palace where he lived. Another is “Peter the Wild Boy”, whom George I brought back to Hanover after finding him living in the woods. It is thought that Peter suffered from a genetic condition known as Pitt-Hopkins and it is believed that he haunts the King’s staircase. Princess Sophia is another royal ghost in the palace. Apartment 1A, home to the Duke and Duchess of Cambridge as well as Prince George and Princess Charlotte, is rumoured to be one of the more haunted palaces in Kensington Palace.

Princess Margaret and her ex-husband, Lord Snowden, would throw extravagant parties at Kensington attended by plenty of celebrities. The Beatles were frequent guests of these parties and would even perform sing-alongs around the piano.

Many of the important events of Queen Victoria’s life happened at Kensington. Not only was the queen born in the palace, but she met Prince Albert there, and heard of her accession there. It was thought she would continue to live there after becoming queen, but she opted for Buckingham Palace instead.

A private road was built from Kensington to Hyde Park Corner that was wide enough for three-to-four carriages to ride abreast. Part of the road eventually became the major thoroughfare known as Rotten Row.