You are here: Home / Culture / Buildings / Top Ten Things to See and Do at Westminster Abbey 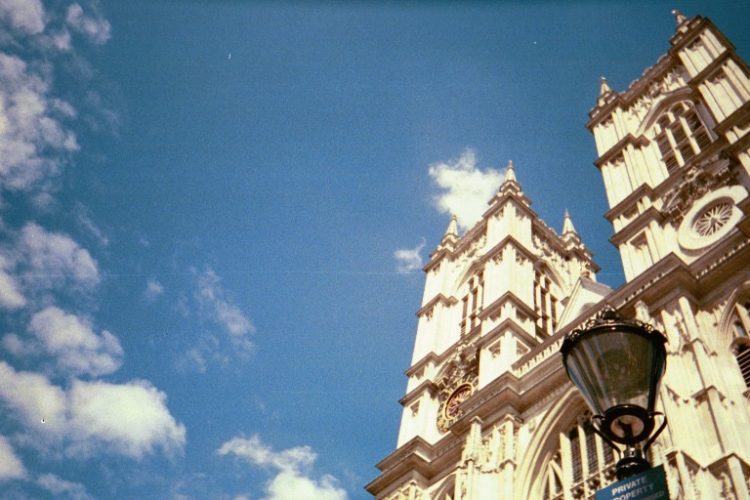 Known formally as the Collegiate Church of Saint Peter at Westminster, Westminster Abbey has been at the center of Christian life in London since the 7th Century when the first church was founded on the site.  The Abbey got its start when Saint Dustan and King Edgar founded a Benedictine community there around the 960s or 970s.  Edward the Confessor then began construction of the previous church in 1042 and it is here where King William I began the tradition of holding the coronation ceremony in Westminster Abbey.  King Henry III is responsible for the current church building and since 1245, it has been a place of great history and importance to the United Kingdom.  We highly recommend you visit when you go to London and check out one of these ten things below.  If there’s anything you think we left out, you can share it in the comments.

When Westminster Abbey was still home to the Benedictine monks, the cloisters were a hub of activity, a place where the monks would pray, work, and even exercise.  They also served as a route from the church building to other parts of the abbey.  The cloisters also abut the cloister garth, a lawn featuring a memorial fountain for Lancelot “Capability” Brown, as well as a little cloister garden.

Visiting the cloisters will also lead you to our next entry, the Pyx Chamber, which sits off of the East Cloister.  The chamber is one of the oldest parts of the abbey, located in the undercroft of the monks’ dormitory which was built in 1070.  The medieval tile work is amazing and the chests often held vestments and important documents.

Library of the Dean and Chapter

Visitors wanting to know more about Westminster Abbey’s history can visit the Library of the Dean and Chapter, which holds numerous tomes detailing the history of the abbey.  The library archive, also known as the muniment collection, holds a great number of administrative records dating back to the 10th Century and even royal charters.

Fifty-two feet above the church floor, the Queen’s Diamond Jubilee Galleries were off-limits to the public for 700 years before the abbey turned the medieval triforium into a display for its greatest art pieces.  Medieval illuminated manuscripts, the country’s oldest surviving altarpiece, and even the royal marriage license for the Duke and Duchess of Cambridge can be found in the galleries.

The south transept of Westminster Abbey has earned the nickname “Poet’s Corner” due to the high number of novelists, poets, and playwrights for whom it serves as a final resting place.  Geoffrey Chaucer was the first luminary buried here and has been followed by Dr. Samuel Johnson, Henry Browning, George Frideric Handel, and more.  Many others have memorial plaques, such as William Shakespeare.

The Chapter House in the East Cloister was as much a place for worshipping God as it was doing the chapter’s business, be it daily administrative matters or passing judgment on a fellow monk.  It was one of the largest of its kind when it was finished as part of the current abbey and makes for a very impressive space with its wall paintings, stained glass, and vaulted ceiling.

Of course, Britain’s greatest writers aren’t the only persons buried in Westminster Abbey, and the Royal Tombs are home to the bodies of more than thirty kings and queens from Edward the Confessor to King George II can be found here.  Several of the tombs are topped with grave effigies such as those of King Henry III and Queen Elizabeth I.

One of the most important aspects of the coronation ceremony is the Coronation Chair, also known as Edward’s Chair after King Edward I who first used it.  It was built to encapsulate the Stone of Scone that he brought from Scotland and while the Stone remains in Scotland when not in use, the Chair is on display in St. George Chapel in the Nave.  If you look very closely, you can read the graffiti carved into it by 18th and 19th Century schoolchildren.

The font of music in Westminster Abbey comes from the Quire which has seen performances since the original monks performed their chants.  The Quire has been renovated twice and the present quire dates back to 1848.  This part of the abbey sees daily choral concerts, so be sure to check the abbey’s website to find the times to attend.

The Lady Chapel is one of the must-see parts of Westminster Abbey, besides being home to the Royal Tombs mentioned above, it’s vaulted ceiling, saintly statues, and tiled floor are beautiful to behold.  The chapel is also the installation place for Knights of the Order of the Bath and their heraldic colors fly on either side of the chapel.  Needless to say, it is a place where you’ll want to spend most of your time while visiting the abbey.