Sitting just across from the Palace of Westminster, Westminster Abbey is every bit as iconic and important to Britain as the Houses of Parliament. Prior to the 11th Century, a church had existed on the site since as early as 604 A.D., the same year that Æthelbert built the first St. Paul’s in London. Later monarchs donated more land and relics to help build the church. In 960, St. Dunstan endowed an abbey there. Early reports state that a young fisherman named Aldritch had a vision of St. Peter on the site, though that seems to be a story meant to justify gifts of salmon to the Abbey (though the Fishmonger’s Company still provides a ceremonial salmon every year).

The current Abbey’s history begins eighty years later with Edward the Confessor. In 1040, Edward sought to rebuild St. Peter’s Abbey as a necropolis, or a burial church, that could be closely-tied to the crown as a church for royal functions as well as funerals. The new church, named “west minster” to differentiate itself from St. Paul’s (the “east minster”) was built in the Romanesque style—the first of its kind in England. However, Edward would not see it completed during his life. He was already ill by the time it was consecrated on 28 December 1065 and died eight days later. Edward was buried in the Abbey a week later, fulfilling his original intent for the building.

Only a day after Edward’s death, Harold Godwinson is believed to have been crowned in Westminster Abbey, presumably making him the first king to do so and beginning the tradition of the church and coronations. However, some disagreement as to whom Edward had actually chosen to be his successor led to the Norman Invasion of 1066, Harold’s eventual defeat at the hands of William the Conqueror, and William’s subsequent coronation at Westminster Abbey on Christmas day. 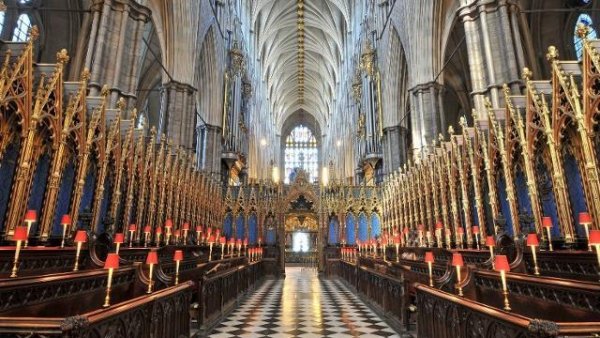 Roughly 200 years later, Westminster Abbey would see itself as the desired burial place for another king, Henry III. Henry was not to be left behind by the rest of Europe as the great Gothic cathedrals of the era were starting to go up and wanted to ensure that England’s capital had one as grand. Construction began in 1245, but wasn’t finished until the 16th Century, meaning that Henry, just as Edward, didn’t live to see its completion. The church was consecrated in 1268, but it was far from completed when Henry died in 1272. By that point, the choir and five bays of the Abbey’s nave had been finished and construction halted for another century.

The new Westminster Abbey, with the exception of the West Towers, wasn’t finished until 1532. During that time, King Henry VII added the Lady Chapel to the Abbey. His son, King Henry VIII, then dissolved the monasteries and brought their buildings under control of the crown. At the time of the dissolution, Henry’s assessor determined the income of Westminster Abbey to be £2,400 to £2,800, which would be anywhere from £1.3 million to £1.5 million today. This was due, in part, to the Abbey being central to the life and economy of the City of Westminster.

Henry VIII wasn’t completely hard on the Abbey, however, and made it a cathedral by royal decree in 1540, at the same time, establishing the Diocese of Westminster. The Abbey at this time was also responsible for the creation of the expression “robbing Peter to pay Paul” as money intended for Westminster Abbey was instead diverted to St. Paul’s Cathedral. Things at the Abbey certainly weren’t settled for quite some time as its status changed between subsequent monarchs Mary I and Elizabeth I.

In the 17th Century, the Abbey was attacked by Puritans and Oliver Cromwell was given a grand state funeral there, only to be disinterred and his body ceremoniously hung following the Restoration. In the same century, Sir Christopher Wren designed the Western Towers that would be built from 1722 to 1745 by Nicholas Hawksmoor.  In modern times, the Abbey continues to make history. It survived the London Blitz with only minor damage. It provided the location for the funeral of Princess Diana and the wedding of her son, Prince William. In 2010, Pope Benedict XVI became the first pontiff to set foot in Westminster Abbey in the church’s history. Lastly, it continues to be the coronation site for the British monarchy. In this, the Abbey will continue to make history for centuries to come.