You are here: Home / The Tube / The Tube: Ten Interesting Facts and Figures About the Northern Line 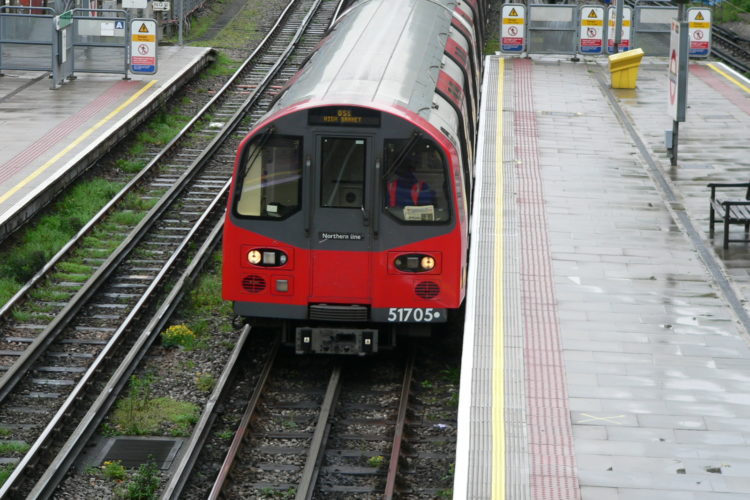 Running from Southwest London to Northwest London on a crescent-shaped path, the Northern Line has an interesting history that separates it from the other Underground routes.  Whereas most of the other original lines that made up the London Underground were formed out of complete, pre-existing railways when they merged as part of the London Transport Safety Board, the Northern Line was a merger of the City & South London Railway and the Charing Cross, Euston & Hampstead Railway.  The line has expanded greatly since, extending to Morden in the south and separating into three separate branches to the north.  As with many of London’s Underground routes, it holds a lot of interesting facts and we’ve identified some of our favorites below.

Word has it that Paul McCartney and Sting have both performed as buskers (or street performers) on the Northern Line while disguised.

The Northern Line is home to the Underground’s longest tunnel, running from East Finchley to Morden for 17.3 miles.

The Highs and the Lows

The line has the deepest station with Hampstead being 192 feet underground as well as the highest elevation, rising 60 feet above the street as the line goes over the Dollis Brook viaduct over Dollis Road.

The Northern Line has disused stations, but also one that was never completed.  The North End Station between Hampstead and Golders Green was started in 1903, but construction was halted for a housing development that was ultimately never constructed.  By the time construction had stopped in 1906, much of the tunnels, the passageways, and the lift shafts had been dug.  Even unfinished, it still managed to serve a purpose as a storage site during World War II and as part of London’s civil defense during the Cold War.

The iconic phrase was first recorded by sound engineer Peter Lodge in 1968 after the actor hired for the job demanded royalties.  While several other voice actors and personalities have recorded the words that play throughout the Tube system, Embankment Station still features Lodge after his widow asked them to keep it so she could still hear his voice.

The Northern Line splits off when it gets to Central London starting after Kennington and coming back together at Euston.  Running through a number of the city’s popular stations including Leicester Square, Embankment, Waterloo, Charing Cross, and London Bridge, it’s no surprise that the Northern Line commands the greatest number of trains during peak service at 91.

As one of the busiest lines in the Underground, the Northern Line has expanded several times as the city grew in the 20th Century.  When the line opened in 1890, it ran from Stockwell to King William Street (the latter now a disused station).  After about ten years, the line was expanded to have it run to Moorgate via Bank Station and extended further to Clapham Common and Euston Station in 1907.

How Long Can You Hold Your Breath?

While the air quality of the London Underground has improved since the start of the millennium, a 2002 study discovered that the air was 73-times worse in the Underground tunnels than it was on the street.  That same study stated that twenty minutes on the Northern Line was the equivalent to smoking a cigarette.

Normally that prospect isn’t so bad, since as comedian Mitch Hedberg stated: “Escalators can never break, they can only become stairs.”  However, that becomes a little more daunting when you realize the escalator at Angel station in Islington is 197 feet long.

The first baby born on the London Underground was Marie Cordery in 1924 at Elephant and Castle Station.  Meanwhile, one of the most famous babies born in the Tube was television presenter Jerry Springer, whose mother gave birth to him while taking shelter in Highgate Station during a bombing raid by the Germans in 1944.