You are here: Home / Guides / Top Ten Things to Do in Kensington 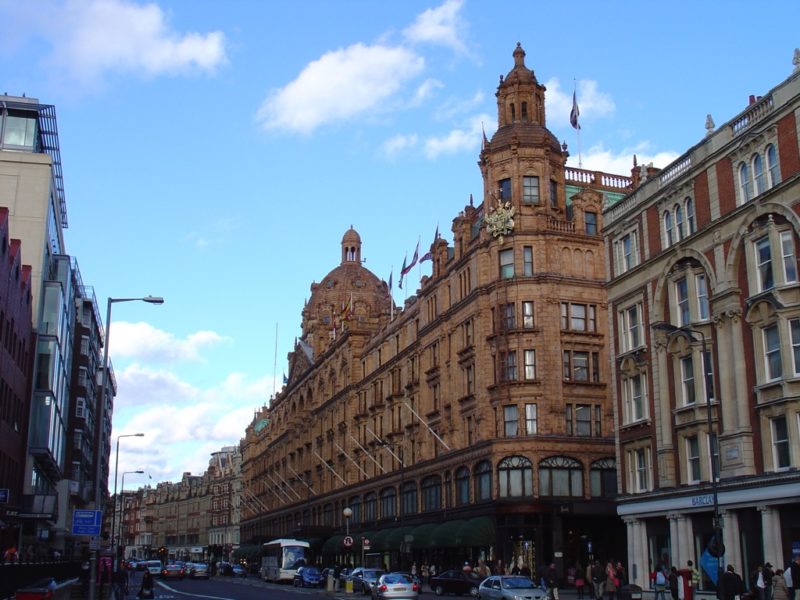 Perhaps one of the most (if not the most) affluent areas of London, Kensington is part of the Royal Borough of Kensington and Chelsea.  As befitting its title, Kensington is home to some of the city’s most expensive real estate as well as many of its biggest tourist attractions.  Whether you’re looking for some high-end shopping or to spend time with the wealthiest museum pieces in the Western world, then you’re going to want to head straight for Kensington.  We’ve outlined our top ten favorite things to do in this district below, and you can let us know your own favorite places in the comments.

One of the most beautiful spots in London, Holland Park is 54 acres of green space with multiple unique features.  Perhaps the best known of these is the Kyoto Garden with its Japanese design including a waterfall and koi pond. It’s also home to more traditional formal gardens as well as a number of peacocks.

Harrods is unquestionably the top shopping experience in London.  It set the standard for service and luxury that Selfridges, Liberty, and others would come to emulate.  With the motto of “All things for all people, everywhere” you can find just about anything you want, including groceries, clothes, toys, art, literature, and more.  You can even dine in one of the restaurants and cafes during a break in shopping.

Once both home and studio for Frederic, Lord Leighton, the Leighton House Museum is now an art museum and a memorial to Lord Leighton.  The building is Grade II listed, and George Atchison designed the interior with a heavy Middle Eastern influence as Frederic Leighton intended.  The rooms are furnished much as they were when the lord and his family lived there, so it will also give you a good idea of wealthy Victorian life.

The Royal Albert Hall is a centerpiece of music performance in London and came about following the Great Exhibition of 1851 when Prince Albert and other members of the government were interested in continuing to promote the arts and sciences.  Unfortunately, Albert did not live to see its completion, but you can see it inside and out either by attending a performance or by taking a tour.

One of two museums on this list dedicated to how things look, the Design Museum focuses on fashion, architecture, furniture, transport, product, and digital mediums.  As such, it’s a bit more modern than the later entry and not only focuses on the present but tries to assume what the future of design will look like from fashion to landing on Mars.

As with the Royal Albert Hall, the Science Museum was built to continue the work done by the Great Exhibition and became a founding building in what was known as the Albertopolis.  Like many of the museums in Kensington that are part of the Albertopolis, the Science Museum doesn’t charge admission, which might account for its 3.3 million annual visitors.  Everything from astronomy to engineering can be found under its roof, and it has an array of fascinating rotating exhibits.

The Victoria and Albert Museum (or V&A as it’s more colloquially) is an art and design museum that is unparalleled in the world.  While the Design Museum focuses more on the present, the V&A reaches back into the past to cover more than 3,000 years of how things look.  The permanent collection is free to see, and there are a number of rotating exhibits that make the trip worth it.

Founded in 1881, the Natural History Museum is the country’s greatest repository of exhibits dedicated to the natural sciences.  One of the most impressive parts of the museum is its grand entrance hall, where the giant skeleton of a blue whale named Hope currently dangles from the ceiling.  Of all the museums that make up the Albertopolis, it is certainly the most impressive.

Kensington Gardens were once the private gardens of Kensington Palace (more on that next) and have been open to the public since the 19th Century.  Separate from Hyde Park, the gardens have their own unique features that are worth seeing such as the Serpentine Lake, the Italian Garden fountains, the Peter Pan statue, and much more.

Kensington Palace started as a mansion that was built in 1605 before it became the home of King William III and Queen Mary II and remained the primary royal residence until King George III ascended the throne.  Today the palace is mostly a museum dedicated to the Royals who once called it home and includes exhibits dedicated to Queen Victoria’s childhood and Princess Diana.