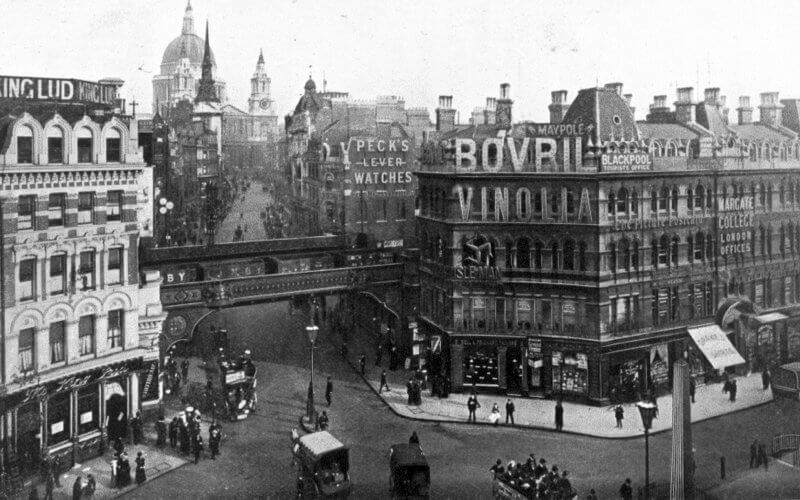 The Victorian period follows the life and reign of Queen Victoria, from her ascension to the throne in 1837 to her death in 1901.  In many ways, her reign was a golden age for Britain as the British Empire expanded to its greatest height, advancements in science and technology abounded, and London’s construction helped transform it into a city we recognize today.  Of course, that doesn’t mean everything was rosy in the heart of the empire’s capital city, as increasing poverty, health, and pollution issues were also rife.  This dichotomy produced a number of interesting events and facts that we will relate to you, and you can share any interesting tidbits we left out in the comments.

One of the most noticeable changes to London during the Victorian period was the increase in its population.  In 1800, the city only had about 1 million people living in it, but a century later, there were 6.7 million.  As the Industrial Revolution took hold of the country, many people left farms in the country for factory work in the cities.  As a result, London’s poverty and housing issues also exploded.

The picture we have of London during much of the early Victorian period comes from the works of Charles Dickens.  His novels such as Oliver Twist, David Copperfield, and A Christmas Carol helped bring a greater awareness to the plight of London’s poorer citizens—something that Dickens himself had experienced as a child.

While today London’s skyline is populated with many skyscrapers like the Shard, the Gherkin, and the Cheesegrater, many of its other well-known buildings were constructed during this time.  These include the Tower Bridge and the Palace of Westminster, which is home to Parliament and Elizabeth Tower (known as “Big Ben” to most, though that’s really the name for the bell).  Other famous London landmarks constructed during Victoria’s reign were Trafalgar Square, the Royal Botanic gardens, and the Royal Albert Hall, amongst many others.

Perhaps the most famous crimes of the Victorian era were the murders committed by the infamous Jack the Ripper.  Several gruesome prostitute murders were attributed to the Ripper between 1888 and 1891, but he was never caught.  However, the investigation led to several advances in police methods including forensic photography, criminal profiling, and crime scene protection, amongst others.

Nearly every single one of Britain’s railway lines got its start in the capital and branched out to all parts of England, Scotland and Wales.  Between 1836 and 1847, Parliament authorized some 8,000 miles of railways throughout the UK with many having their terminus in London.  The London Underground, better known to most people as The Tube, got its start during the era as well, with the first lines established in 1863.  Today, 1.7 billion people ride trains within the UK, and 1.35 billion ride the Tube.

The Origins of Disease

In 1854, Dr. John Snow was able to track a cholera outbreak in the city to a single water pump near Broad Street in Soho.  His work helped to establish the field of epidemiology.

The Great Exhibition that Changed the World

The Great Exhibition of 1851 had an incredible impact not only on London but the rest of the United Kingdom and the World.  Hosted at the Crystal Palace, it became a chance to show up the many advances in science and technology that the British Empire had achieved.  Six million people passed through the exhibition during the year, which inspired Prince Albert and the exhibition organizers to start many of the institutions that populate South Kensington, such as Imperial College London, the Royal College of Music, the Royal College of Art, the Natural History Museum, and more.

This doesn’t refer to an American Western film, but a series of cemeteries that were constructed between 1833 and 1841.  These include Tower Hamlets Cemetery, Nunhead Cemetery, Highgate Cemetery, Brompton Cemetery, Abney Park Cemetery, and West Norwood Cemetery.  Built to help alleviate the overcrowded church graveyards of London, many of the statues, monuments, and tombstones have their own beauty to them that is compounded by the greenery.

Something that helped to change London for the better was the Great Stink of 1858.  For centuries, the River Thames was essentially a great big sewer basin for the city as much trash and excrement was dumped into the river.  The amount of refuse and hot summer temperatures caused a smell that could be smelled all along the banks of the Thames.  Joseph Bazalgette helped London to develop its sewer system that not only reduced the pollution in the river but also helped to control disease outbreaks.

No Cause for Sadness

When Victoria died in 1901, her dislike of black funerals led to the streets of the city being decorated in purple and white in her memory.