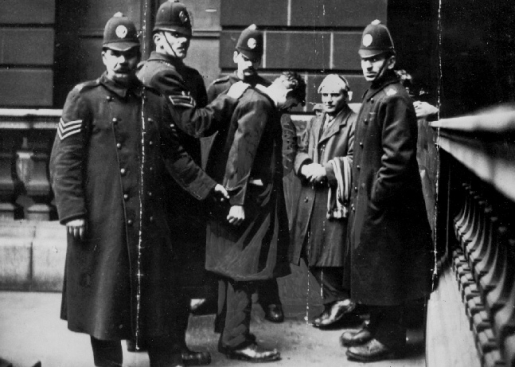 The name Scotland Yard has always been associated with the finest in police work. Since 1829, the Metropolitan Police Service has been on the forefront of crime prevention and investigation. In fact, many modern tools of policing were either invented or first utilised by the Met to capture criminals. As usual, in these cases, necessity was the mother of invention, and each new challenging case led to the creation of new techniques to ascertain and apprehend the criminals. Have a look at five of these methods in this article.

When Sir Robert Peel created the Metropolitan Police Service in 1829, their mission was simply to prevent crime and arrest wrongdoers—but not to investigate crime. Following the French Revolution, most people were suspicious of increases in government power, so when Peel created the Met, he did so with the intention that they be citizen police officers, forbidden to carry firearms and investigate people’s personal affairs. However, with the murder of Lord William Russell in 1840, Commissioner Richard Mayne secretly set about creating the Met’s first detective branch to solve the crime. Using their investigative powers, the first detectives discovered that there had been no break in from the street and the real murderer was Lord Russell’s own valet. This success in detection permitted the formal creation of the detective branch two years later in 1842.

Jack the Ripper’s murder spree not only inspired fear in the populace, but it inspired the Met to create and use new methods of crime fighting. One of the first uses of crime scene preservation occurred after the murder of the Ripper’s fifth and final victim—Mary Kelly. Kelly was the only one of the established victims murdered indoors, and so the police were able to cordon off the building to prevent members of the public from interfering with the crime scene and destroying evidence. Photos of Kelly’s mutilated corpse were the first examples of crime scene photography and were combined with illustrations and extensive notes to determine how she was killed and glean any information that might shed light on the Ripper’s identity. Though these methods proved unsuccessful in catching the killer, they continued to be utilised in later murders that prevented many guilty men from going free.

Also an invention originating with the Ripper murders, Dr. Thomas Bond served as one of the first criminal profilers. Dr. Bond had assisted in the autopsy of Mary Kelly, and well before the days of psychologists providing criminal profiles, Dr. Bond had only his intuition and the facts at hand to build his picture of Kelly’s murderer. Bond believed that the Ripper was a middle-aged man, calm and calculating, and also wore a long coat to hide the blood of his crimes. He believed the crimes were sexual in nature, with a particular anger directed towards prostitutes. Though many eyewitnesses corroborated Bond’s profile of the killer, this was not enough to lead to his capture.

Though Scotland Yard was not the organisation to invent fingerprinting, they are perhaps the first police organisation to utilise it to capture criminals. Collecting fingerprints from known criminals, the Met built up a huge database of fingerprints that detectives could use to identify perpetrators. Perhaps the most prevalent case involved the Stratton Brothers. In 1905, Alfred and Albert Stratton entered Chapman’s Oil and Colour Shop, robbed the till, and killed the owners, Thomas and Ann Farrow, in order to prevent identification of the Strattons as the robbers. However, one of them left a bloody smudge on the cash box, which was collected by the police and turned over to the Fingerprinting Bureau for identification. At trial, Detective Inspector Collins used prints from the Met’s files and images of the prints left on the cash box to make a positive identification of the Stratton Brothers. Though the Strattons weren’t convinced that it was enough to tie them to the robbery and murders, the jury disagree, and they were both convicted.

After Cora Crippen died, her husband, Dr. Hawley Harvey Crippen, told the neighbours she’d caught pneumonia. However, after he moved his assistant into the house with him, the neighbours became suspicious and called the Yard, who launched an investigation. A detective found Cora’s body buried behind some bricks in the basement, which Crippen denied belonged to his late wife. At trial, one of the world’s first forensic pathologists, Sir Bernard Spilsbury, testified that the body was indeed Cora Crippen’s, having found traces of hyocine, a calming drug, in her system and a piece of skin from her abdomen (which bore a distinctive scar) as her head, limbs, and skeleton were never recovered. Though he participated in hundreds of autopsies, investigations, and trials, in more recent times, experts believed that his unwavering certainty in his own opinions were mostly based on inferences and actually led to several miscarriages of justice—including Dr. Crippen. Still, his early work in forensics and trial testimony caused the new science to blossom in field of police detection.