You are here: Home / History / A Short History of the London Underground

Few people realise the extraordinary and fascinating history of the Underground.

The Tube was the world’s very first underground train system, with the first section opening between Paddington and Farringdon back in 1863, on what is now the Circle, Hammersmith & City, and Metropolitan lines. Since then it’s grown to a sprawling underground masterpiece of 11 lines, 268 stations, and over 250 miles of rail track. An affordable and easy way to get around London, the tube remains the first port of call for millions of commuters each day, as well as tourists visiting the city on cheap holidays.

It all started in the mid 1800s. While the first half of the 19th century saw loads of development in train services to London, most of these railway stations (King’s Cross, Paddington, Waterloo, etc) were still some distance from the City, which was where the vast majority of commuters worked.

The various train companies all pulled together and thought it would be a good idea to create an underground railway linking the City to these train stations. A draft scheme that ran from Paddington (the most distant terminus from the City) to a new station at Farringdon via King’s Cross was approved, and the service began on January 10th, 1863. 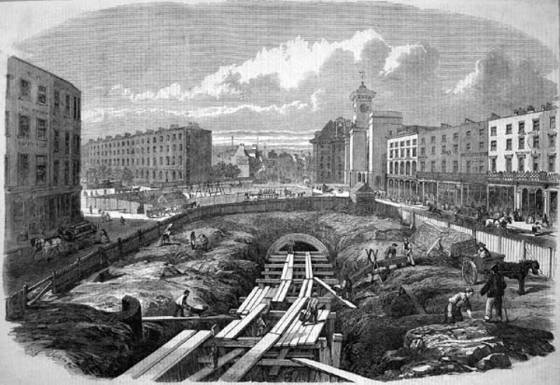 Noticing the success of this first line, others started to spring up in the same style as the Farringdon to Paddington line. The next section to open was the line between High Street Kensington and Mansion House, forming a stretch of what’s now the Circle line. For the first time, the City was linked by rail with the entertainment district of the West End, the parliament buildings of Westminster, and the posh residential districts of Chelsea and Kensington.

It wasn’t until 1884 that the full ‘circle’ was filled in, with connections made between High Street Kensington and Paddington, and Farringdon and Mansion House.

Following advances in deep-level tunnel design, lots more lines began springing up around the turn of the century. The first was between King William Street (now Monument/Bank station) and Stockwell in 1890, forming part of what’s now the Northern line.

In 1898 came a one-stop Tube link between Waterloo and the City, whilst 1900 saw the opening of what’s now the Central line, between its two stations at Bank and Shepherd’s Bush. In 1906 they launched what’s now the Piccadilly line between Finsbury Park and Hammersmith, and in the same year came the modern-day Bakerloo line, between Baker Street and Waterloo. In 1907, what’s now the Charing Cross branch of the Northern line opened, with two northern spurs going as far as Archway and Golders Green.

Just as the Tube’s expansion was at its most prolific, with practically every line extending its services further and further out into the suburbs, the First World War hit, and development was slowed. The Tube would never recapture its feverish growth of the early 1900s, but the late 60s saw the launch of London’s first new Tube line in 60 years with the opening of the Victoria line.

The Jubilee line extension through the Docklands to Stratford followed in the late 90s, and the late 2000s saw the integration of many distinct former National Rail services integrated into the network under the Overground moniker.

So what’s next for the Tube?

A long-proposed line linking Chelsea in the south-west to Hackney in the north-east will likely arrive around 2020, whilst an extension of the Bakerloo line from its current terminus at Elephant & Castle further into south-east London is something that former mayor Ken Livingstone claimed would materialise by 2026.

Until then, there’s the small matter of Crossrail – the £15 billion new east-west mainline rail line, with a central section between Paddington and Liverpool Street. Due to open in 2018, it will link several new commuter belt towns with City and Heathrow airports, so commuters can head straight from work in the Square Mile to jet-set off on their package holidays without even changing trains.