You are here: Home / Culture / From Piccadilly to Portobello Road: The Origins of Ten of London’s Most Famous Street Names 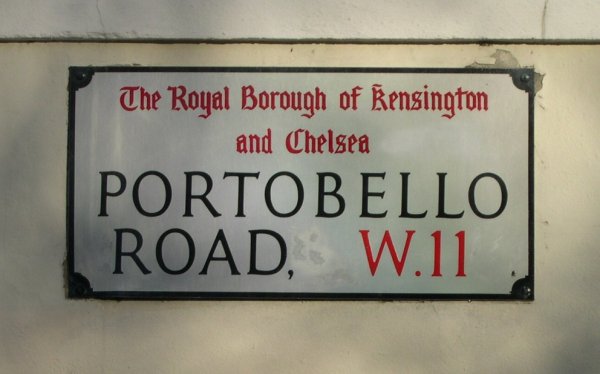 Names are very interesting labels and can tell you a lot about a person, a thing, or a place.  London is chock-full of interesting names whose origins are mostly unknown by the people who live, work, and visit the city.  Some of these names have practically ancient beginnings, going as far back as the Romans, the Angles, and the Saxons.  Some of these places are named for people or properties long since altered by time.  You might know the origins of a few of these names, but others could surprise you.

Piccadilly is a road that has existed since the Romans and during the Middle Ages was referred to as “the road to Reading” or “the way from Colnbrook” and had no formal name.  During Elizabethan times, when it was home to a tailor named Robert Baker.  Baker made “piccadills” (or those frilly collars that were fashionable during the period), and his house and shop on the street became known as “Pikadilly Hall.”  While the street was named Portugul Street for a time in honour of Charles II’s wife, Catherine de Berganza, by the end of the 17th Century, Piccadilly became the name of the entire route.

This commercial and residential district’s name origins go all the way back to King John I.  It comes from Falkes de Breauté, who was the head of the king’s mercenaries.  He also owned a house in the area known as “Falkes’ Hall,” which was eventually applied to the area being known as Foxhall and then Vauxhall.

Before 1740, Portobello Road was known as Green’s Lane.  However, following a major victory in the War of Jenkins’ Ear by Admiral Edward Vernon.  Vernon captured the Town of Puerto Bello in the Gulf of Mexico from the Spanish, and a farm on the road was named “Portobello” in his honour.  Once a country lane, it was heavily built up during the Victorian era as the city grew.

The street made famous by the Beatles’ album recorded there (and the famous photo of the band walking over the zebra crossing) was once a path leading to Kilburn Priory and its adjoining Abbey Farm.  The road was developed in the early 19th Century and became the home for The Abbey Road & St John’s Wood Permanent Benefit Building Society in 1874, by which point the street was officially known as Abbey Road.

Even though Portugal Road changed its name, King Charles II is responsible for at least one major road’s name in London.  The King’s Road began as a private route for him to travel to Kew.  It remained as such until opened to people with connections to the King in 1830.

Sherlock Holmes’ famous address got its name from William Baker, an 18th Century builder who constructed it.  While 221 didn’t exist in Arthur Conan Doyle’s time, Baker Street was expanded north in 1930.

One of the most popular thoroughfares in the city and once home to the likes of Charles Dickens, Virginia Woolf, and Ralph Waldo Emerson, the Strand goes back to Saxon days.  The origins of the name seem to be lost, but it was first referred to as we know it in the Saxon Chronicle around 1052 AD.

As with many London locations, Carnaby Street comes from the name of a great estate that once existed there, known as Karnaby House.  The origin of that name is unknown, but the house was built in 1683.  The market didn’t develop until the 1820s, but little over 100 years later, it would become fashion central for the city and one of the birthplaces of the mod culture.

Perhaps the most famous address in London, it was built in the 1680s by George Downing on the site of the Hampden House mansion.  He ultimately built several townhomes here, a few of which eventually consolidated to become the residence of the Prime Minister.