You are here: Home / Culture / Star-studded night for London theatre – The Olivier Awards in April 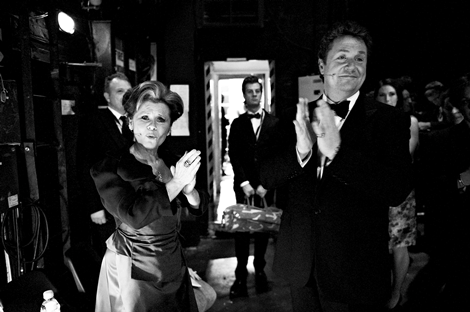 The most prestigious event in the UK’s theatrical calendar will take place at the Royal Opera House, London on Sunday 15 April.

The Olivier Awards, named after the famous English actor Laurence Olivier (later Lord Olivier) are given for West End shows and other productions staged in London, and winning an Olivier is internationally recognised as the highest honour in British theatre.

For the first time in the 36-year history of the Oliviers, the show will be be relayed live to a New York celebration, where an invited audience of VIPs including British stars on Broadway and high profile industry figures will gather to celebrate the awards.

Theatre-lovers in London will also have the chance to watch a free live relay of the event on a big screen in the nearby Covent Garden piazza. There will be entertainment including live performances from some of the West End’s major shows.

The ceremony will again be hosted by Michael Ball and Imelda Staunton, who open in Sweeney Todd at the Adelphi Theatre in March.

The Society of London Theatre will announce the full list of awards nominations on 15 March. For the first time, the nominations will also be broadcast live online at the awards’ website.

The event in New York will be held at the Frederick P. Rose Hall, Home of Jazz at Lincoln Center, Broadway at 60th Street, New York City. There will be a brunch from 11.45am (local time) and live relay of the ceremony from London from 1pm.