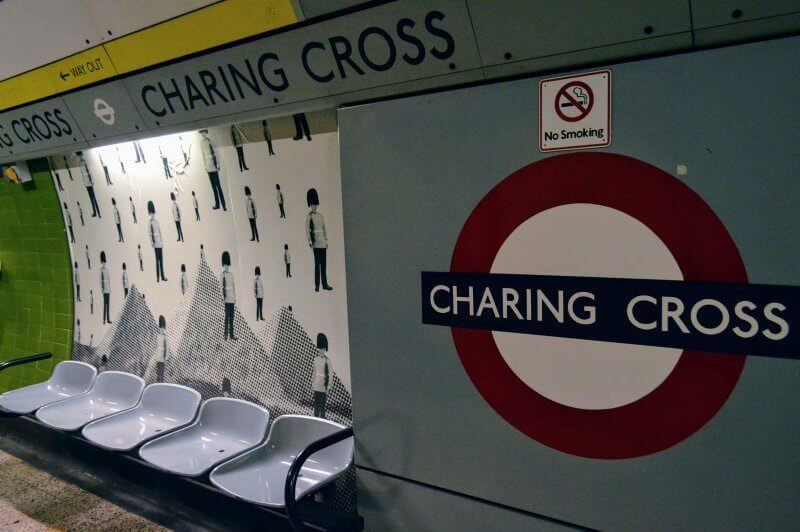 London Transport Museum has a really interesting selection of ‘Hidden London’ tours that give us occasional access to tunnels and stations on the London transport network that are no longer in operational use.

The ‘Charing Cross: Access All Areas’ tour looks at the out of service Jubilee line platforms and construction tunnels left over from the excavation of the Jubilee line in the 1970s.

It’s always a treat to visit areas not accessible to the general public, but this tour includes an area you will be telling your friends about for years. 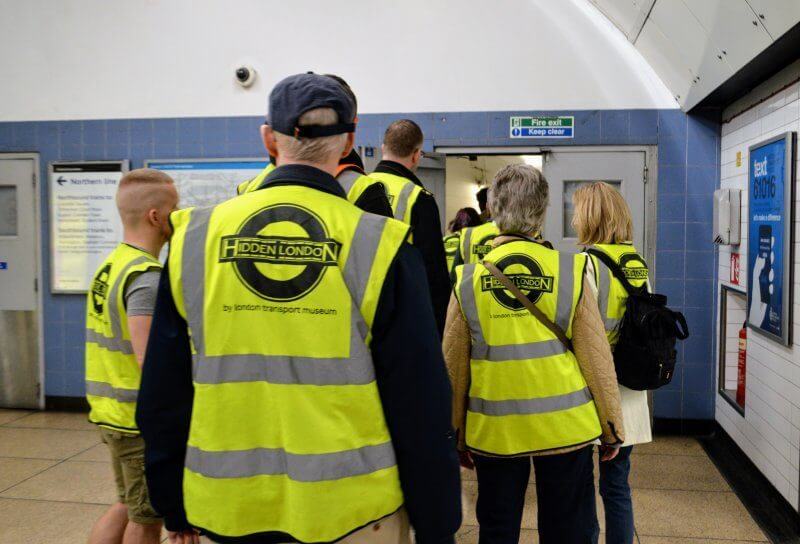 The meeting point is near the Ticket Hall for Charing Cross Underground Station. I booked for a weekday morning and was surprised how many of the group were from the US and Australia, which really does show the wide appeal of these tours.

After donning hi-vis vests, we were led into the station and down the main escalators. But then instead of left or right towards the Bakerloo or Northern line platforms, we got to go through one of those doors you see but don’t really take in as you know you’ll never be on the other side.

(Interestingly, if you ever hear music from behind a locked door at Charing Cross station it’s because they use the area for auditioning buskers.)

We went down more escalators (this time not working, so we had to walk down) and were met by the expert volunteers who shared their knowledge throughout the tour.

Before going onto the old Jubilee line platforms, we found out more about the area, the station and why these platforms are no longer in use.

Charing Cross railway station opened in 1864. The station was built to extend the Southern Eastern Railway westward from London Bridge and to transport passengers from Kent into the center of London. 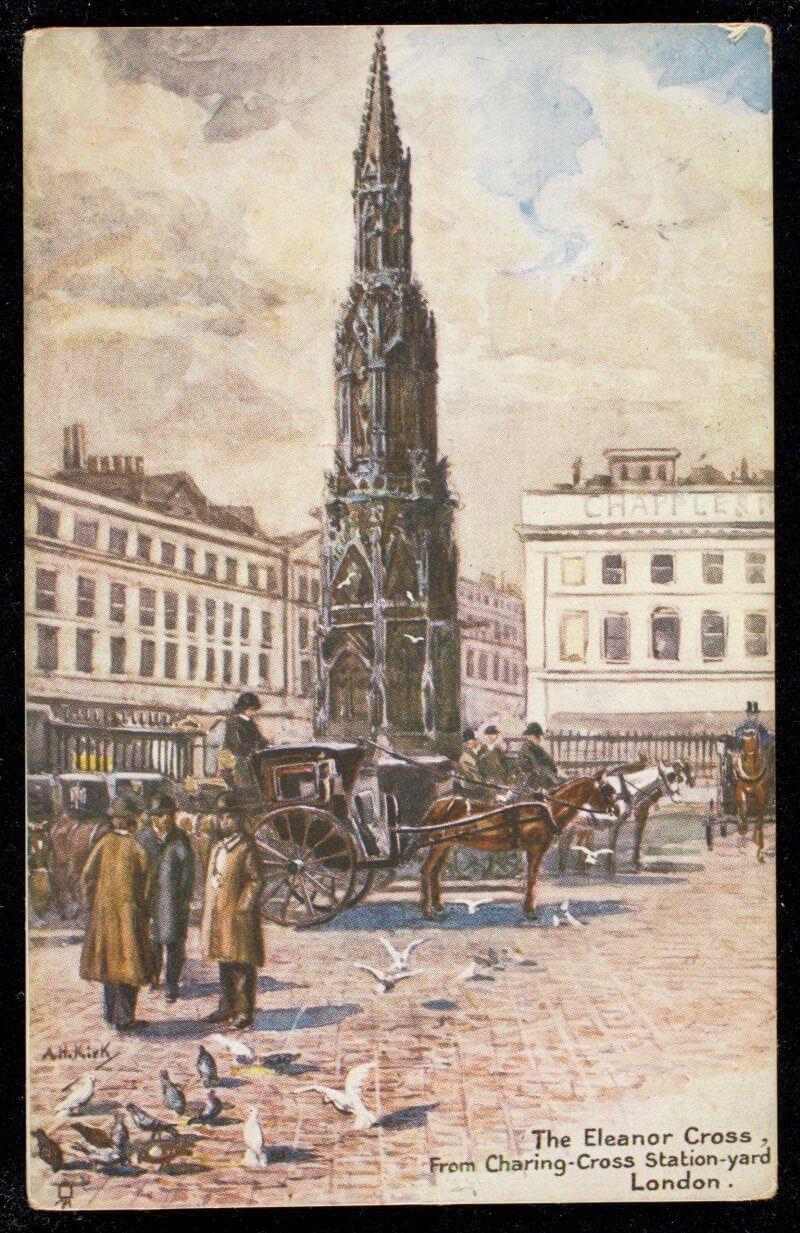 On the forecourt of the station stands the Eleanor Cross – one of nine put up by King Edward I in memory of Queen Eleanor, following her death in 1290.

Eleanor of Castile was only ten years old when she left her home in Spain and arrived in England in 1254 to marry Edward. As she was so very young at the time of their marriage, Edward went away for the first few years to continue his war plans.

By 20 years old she had their first child and went on to produce sixteen children so there must have been some love. She died suddenly, so Edward put up the memorials at the nine places where her body rested on the way from Lincoln to Westminster Abbey.

The Eleanor Cross here is considered the most famous and gave the area – Charing Cross – its name. (Charing, is derived from the Old English word “cierring,” referring to a bend in the River Thames.)

The original Eleanor Cross was made of wood and stood at the top of Whitehall, where the statue of Charles I on horseback can now be seen. This is the point from which Britain measures its road distances to and from London.

The wooden cross was destroyed in the Civil War, so the present Victorian memorial was designed in 1863 to replicate as closely as possible the medieval one. It was renovated in 2010 and is around 69 feet high.

The Underground station here has gone through many name changes and merges to be the station we see today.

The first Underground station built on the Charing Cross site was called Trafalgar Square and opened in 1906. It served the Baker Street & Waterloo Railway which is now the Bakerloo line.

The second station in the area was called Charing Cross and opened one year later in 1907. It was positioned on the Strand and was the original terminus for the Charing Cross Euston & Hampstead Railway (CCE&HR) which is now part of the Northern line.

This second station was renamed Charing Cross (Strand) in 1914, and in 1915 it was renamed again to Strand.

The nearby 1870 Charing Cross station opened by the Metropolitan District Railway was finally renamed Embankment in 1976 after several name changes.

I think all of this highlights how the individual underground lines were not built as a unified network but as separate transport lines by private companies. There would have been different tickets needed for each line and different reliability from each company. We have our complaints about Transport for London now, but it wasn’t this complicated!

In 1971 construction started on a new underground line which was to have been called the Fleet Line. The name was used due to the expected extension of the line from Charing Cross, along the route of Fleet Street through to stations in the City, including Fenchurch Street and Cannon Street.

The name changed to the Jubilee line was to commemorate the Queen’s Silver Jubilee in 1977. (Apparently, it cost £50,000 to change all the signs!) It took two more years for the line to open and it is still the newest underground line on the network.

As this is such a busy area of central London, there were construction tunnels used to load excavation waste to avoid road congestion. Trucks could then be loaded with the spoils away from the site. (See ‘Construction Tunnel’ below for more information.)

The new Jubilee line, initially running from Stanmore to Charing Cross, opened in 1979. 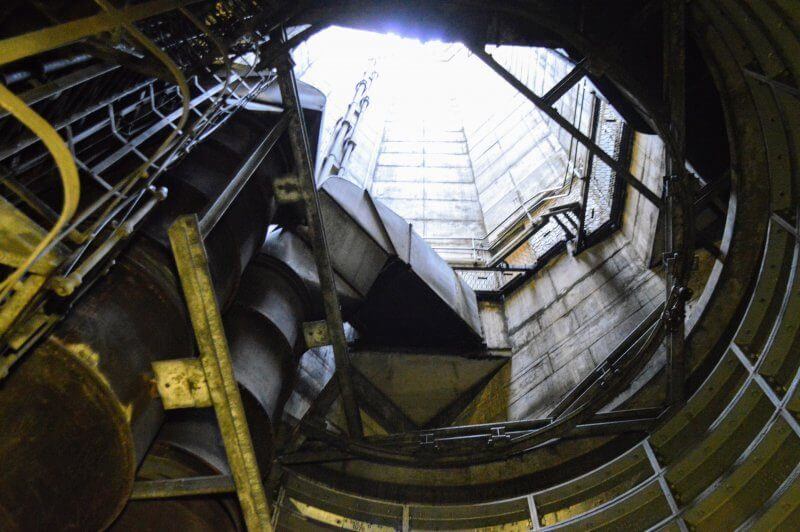 Construction of the Jubilee line also allowed for a much-needed ventilation system to be added.

In 1973 a ventilation shaft was sunk in to provide draft relief and ventilation to the Northern and Jubilee line platforms. It’s nearly 200 feet in depth (with 169 feet above ground) and 23 feet in diameter.

The ventilation shaft can be seen on Craven Street, near Benjamin Franklin House, and looks to be an integral part of an office block. It’s about the same height as Nelson’s Column in Trafalgar Square. 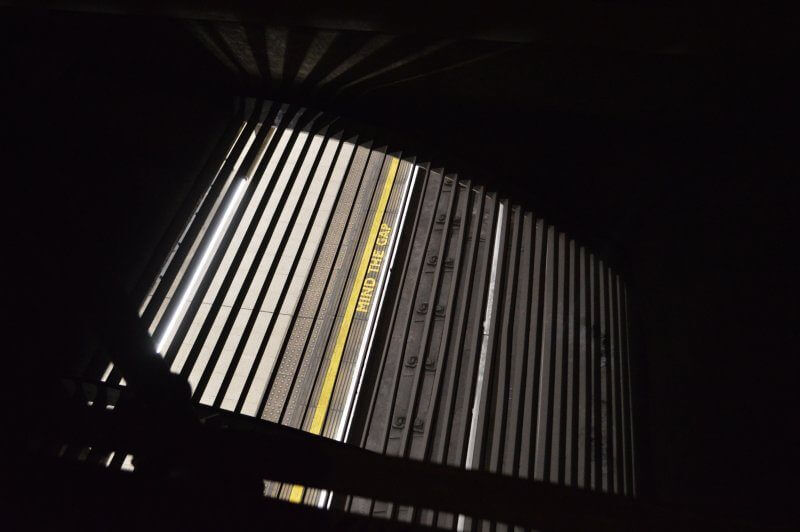 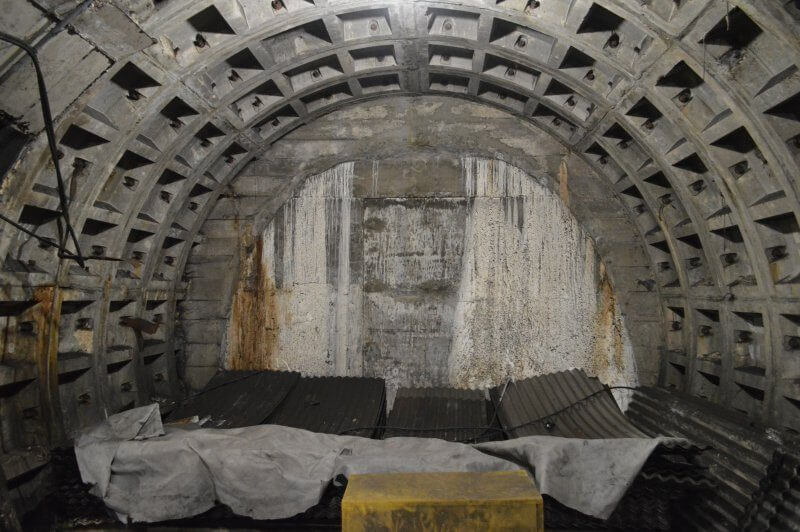 Plans for significant redevelopment and building across the old London docklands resulted in a change of route for the Jubilee line extension. The significant developments in the Canary Wharf area from the 1980s meant additional transport was needed.

Due to new tunneling techniques, a different route was used for the planned Jubilee line extension, re-routing from Green Park station to Westminster, then along the south of the river, up to Canary Wharf and finally Stratford.

These platforms were closed as they were no longer needed, so there are no plans to reopen them. After being out of service for almost twenty years, the platforms really don’t look old-fashioned. While some ‘tunnel tours’ are dark and dusty, these platforms seem clean and well lit.

With the Jubilee line area no longer in operational use here it meant the platforms, escalators and associated tunnels (TfL call it all the Jubilee Complex) could be used for filming TV programmes and movies (as well as training exercises for the London Fire Brigade and Metropolitan Police).

During the tour, there’s a short film with highlights of some of the well-known movies that have been filmed here including the 23rd James Bond film, Skyfall, where Daniel Craig slides down between the escalators and the chase scene for Matt Damon’s Bourne Ultimatum.

The first Paddington movie also had scenes filmed in Charing Cross as well as the first episode of Series 3 of BBC’s Sherlock with Benedict Cumberbatch and Martin Freeman.

Posters get changed for filming so the ones I got to see are fakes so they can’t be seen to be advertising something in a TV programme, especially on the BBC. It was interesting to spot the fake phone numbers and websites on the posters.

From now on you’ll be looking more closely at films which feature a London Underground station as it is likely to be the Jubilee line areas of Charing Cross station. (If it is a more old-fashioned station then it will be Aldwych.)

A big clue is that these are the only platforms where the roof lining panels have been removed. (All needed to be changed across the network after the King’s Cross station fire in 1987, but there was no need to go to the expense of adding new panels here.)

And don’t be fooled by different signage as we saw a fake Circle and District line sign that have been added for the filming of Skyfall as it was supposed to be at Temple station.

We also spotted signs for ‘British Rail’ (to the mainline railway station). BR ended in 1997 with Railtrack running the railways until 2002 when state-owned Network Rail took over.

The Jubilee Complex area is also used for testing by Transport for London.

The tactile flooring that is now on all platforms to help visually impaired passengers was trialed here first. And the raised platform sections to increase accessibility were trialed here too.

Lighting on the sides of escalators was trialed here, but that didn’t get used elsewhere. And the large yellow sections on the walls opposite the platforms to show where there are exits also wasn’t used after trialing.

I mentioned at the start that there is a part of this tour you will be talking about for years, and this is it. The construction tunnels dug for removing the spoils from the Jubilee line excavation go right under Trafalgar Square!

These tunnels were never intended for passenger use, so this is a real behind-the-scenes moment. We entered via one of those doors you pass in a corridor and never really notice.

This is the darker and dirtier part of the tour but the most fascinating. It is not a straight tunnel as it has to curve around the foundations of Nelson’s Column. The tunnel passes under the fountain on the right as you look towards the National Portrait Gallery then slopes down to end about under the Fourth Plinth. It used to continue straight ahead with a narrow gauge tramway taking spoil out via a shaft to the surface to a worksite where the Sainsbury Wing of The National Gallery is now located. This tunnel has now been sealed, and extra struts have been added down here to support the building above.

In this tunnel, we could clearly see the eight sections of each tunnel shield. This tunnel could have been smaller, but it was built to the same size as train tunnels so London transport could use tunnel shield stock they already owned. You can see the date of manufacture on the tunnel shield sections here, and it’s clear they were leftover from the construction of the Victoria Line in the 1960s.

These occasional tours have been running since 2015, and you can book on the London Transport Museum website: www.ltmuseum.co.uk.

There are 20 places available on each tour, and you need to wear sturdy walking boots.

The tour lasts around 75 minutes and, I promise you, the time goes very quickly.

All in all, it’s a fascinating tour and highly recommended.