You are here: Home / Culture / Museums / Top Ten Things to See at the London Transport Museum 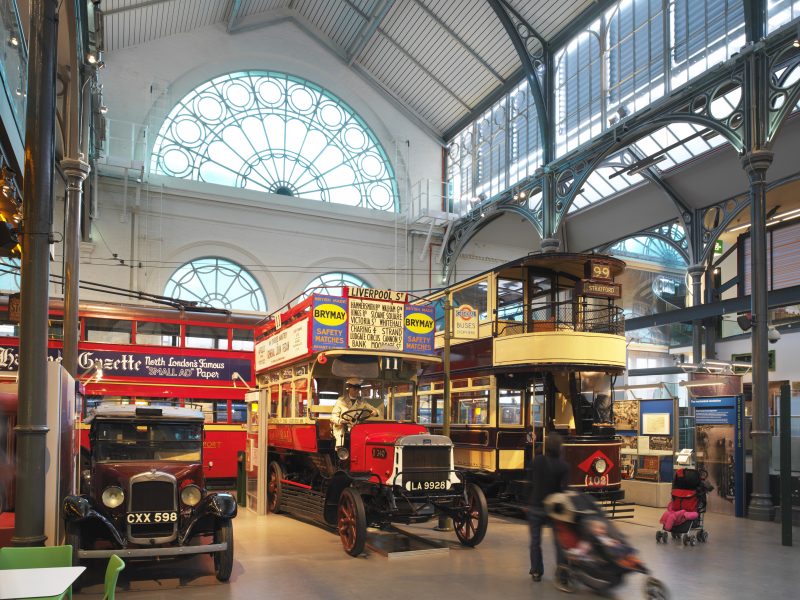 Getting around London has been a big deal for centuries.  Going back to the beginning of the 1800s when horse-drawn buses transported everyday citizens and handsome cabs were available for those with more means, transporting Londoners from one point to another has been a major part of the city.  The London Transport Museum exists to document this history from its earliest days to the present, helping us to understand more about how the city’s conveyance began and evolved.  If you’ve got a curious eye for how buses, cabs, bicycles, and the Tube have changed over the years, visit the London Transport Museum and check out one of these ten exhibits below.

The first licensed public transport in London, a Sedan Chair is a single person conveyance that’s actually carried by people two people, one in the front and one in the back, while the passenger sits comfortably in the middle.  Sir Saunders Duncombe introduced it to the city in 1634, and they quickly became a popular means of travel.  This example in the museum’s collection dates from 1780, towards the end of their heyday.

It’s strange to think that what we consider to be part of everyday life was once believed to be “too radical”.  When all of London’s public transport consolidated into the London Passenger Transport Board in 1933, Underground electrical draughtsman Harry Beck came up with the iconic design for the new Tube map.  Basing his design on the electrical wires he worked with rather than geography, he came up with the crisscrossed colored lines we know so well.

The London Transport Museum boasts a collection of over 5,000 transportation-related posters and other records online.  Their collection includes transport posters done by such artistic luminaries such as Graham Sutherland, Abram Games, and Ivon Hitchens.  The posters run the gamut of advertisements for sport, Tube services, information, and even wartime propaganda.

We’ve written about London’s disused Underground stations before, and while you can’t visit them except on rare occasions, the London Transport Museum has a whole exhibit dedicated to them that you CAN visit.  The Hidden London exhibit explores the history of these stations, those left unbuilt as well as those that turned into important World War II defense locations and posters, items, and photos related to them.

A fun interactive exhibit at the museum, Untangling the Tracks invites children of all ages to engage in a puzzle by making sure trains get to the right platforms on time without running into one another.  The exhibit helps visitors learn the job of modern transportation engineers.  Visitors can also figure out how to evenly distribute passengers about a train and how changes to infrastructure necessitate how we move people about.

The AEC Routemaster was the iconic red double-decker bus that zoomed about the London streets from its introduction in 1954 all the way until 2005.  In going this long, it outlasted several other models that were designed to replace it.  When something did finally successfully replace the AEC Routemaster, it borrowed heavily from its predecessor and became the New Routemaster.  Examples of both buses are part of the museum’s display collection.

Prior to motorized buses like the ones mentioned previously and the London Underground, horse-drawn omnibuses were the primary means for moving the average Londoner around the city.  The omnibus in the museum’s collection dates from 1881 and was in service until 1911.  It was operated by London General Omnibus Company and is a perfect example of one of the largest vehicles of its type, capable of carrying 28 people at an average speed of 8 mph.

Given that the London Underground got its start in 1863, it shouldn’t be terribly surprising that the first trains that traveled these lines were powered by steam.  In honor of the Underground legacy, the museum has one of the earliest steam-powered engines on display.  The museum also occasionally hosts heritage vehicle events, including bringing some of these old steam trains back into service for short routes.

In a day when we all try to crowd in through one or two entrances on a modern Tube coach, it can be interesting to see something like this Bogie Stock Coach from 1900.  This old-timey underground coach had individual passenger doors and external handrails.  The coaches were originally driven by steam power but were later converted for the new electric trains, and the museum has one of these coaches where the interior has been renovated to resemble the different decades of its use.

And if you haven’t seen enough transport vehicles while touring the main London Transport Museum, you can head out to The Depot in Acton which houses the excess exhibits and vehicles too large to put into the Covent Garden location.  The Museum Depot isn’t always open to the public but does regularly have days when it hosts pre-booked guided tours, so it’s worth checking with the museum to find these dates and plan accordingly.