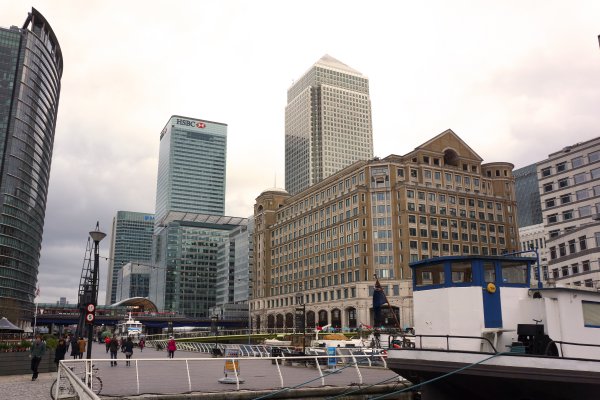 Arguably one of London’s first major mixed-use developments, Canary Wharf came about as changes in the world economy during the 20th Century saw London’s port industry decline.  Beginning the late 1980s, the British Government took it upon itself to adopt new regulations to spur revitalization of the area, an effort that succeeded tremendously by turning the vacant docks into a major business sector.  Today it is not only home to major international corporations, but also many interesting places to visit.  Spreading from the former docks themselves through the Isle of Dogs, you can find museums, movie theaters, and even a farm.  We’ve identified our top ten favorite spots below, but you can let us know your own in the comments.

Listed as no. 10 only because of its limited availability, the ice rink at Canary Wharf runs from November 4th to February 24th, so you better get your tickets while it lasts.  If you miss it, however, there will be another chance next November.  Besides the 1300 square meter rink (open seven days a week), there is also a skating path that will take you under the trees and lights of Canary Wharf.

Every modern development knows that art is the spice of life, and so adds several installations to make the area more colorful.  Canary Wharf possesses one of the largest collections of public art in the UK, and some of the pieces are so subtle, you may not be aware you’re walking past (or even over them) without the help the district’s public art map.  Everything from Cabot Place Shopping Mall’s “Pattern for Democracy” to Jay Battle’s “Vanishing Point” will be on there, so you won’t miss a thing.

Whether you’re in the mood for an artsy independent film or a big summer blockbuster, Everyman Cinema shows movies to please every taste.  Its three cinemas feature couches for two, making for the perfect date night, or recliners and its stylish bar is always done up based on the films playing at the time.  What’s more, from the bar you can order a great selection of food to take into the film with you rather than candy and popcorn.

This shopping mall in the heart of Canary Wharf features over 300 shops, restaurants, bars, and more, meaning you might spend a lot of time as well as a lot of money.  Major brands from Godiva to Marks and Spencer are well represented here spread over Cabot Square, Canada Square, Churchill Place, Crossrail Place Jubilee Place, and the Park Pavilion Restaurants.  Whatever you’re looking for, you’re guaranteed to find it there.

Canary Wharf’s Tube station has one of the best-looking entrances of any in the entire London Underground, but that’s not the only reason to stop and have a look as you arrive or depart the area.  Being part of the business district means it is one of the busiest stations in the Underground network, so you might not have a lot of time to sightsee the station during peak times, but if you’re a movie buff, you’ll want to check it out for its connections (no pun intended) to the films 28 Days Later and Star Wars:  Rogue One.

You might be surprised to find a working farm in the middle of the city, but Mudchute Park and Farm on the Isle of Dogs is just a stone’s throw from canary wharf and well worth your time.  Mudchute serves an important purpose of being a local nature serve and a Site of Metropolitan Importance for Nature Conservation.  Farm animals range from cows to alpacas and the kitchen will put you within eyesight of the farm’s herd of sheep grazing as you chow down on locally-sourced meals.  Any number of events are hosted at the park, so be sure to check the calendar to see what’s going on there.

Billingsgate is the largest wholesale fish market in London and comparable in many ways to Seattle’s famous Pike Place Fish market.  The market was formally established by an Act of Parliament in 1699, and by the 19th Century, it was the largest of its kind in the world.  The market moved to its current location in 1982, and it’s worth visiting to see how the fishmongers go about their trade, just make sure you wear some well-treaded shoes as the floors can be quite slippery.

Those who want to know more about the importance of the area to London’s history can visit the Museum of London Docklands, which will guide you from the Isle of Dogs’ earliest days of fishing through its status as a center for London’s shipping.  Exhibitions include the importance of the West Indies to London and how the docklands were affected by the two world wars.  Special events are always happening there, so be sure to check the calendar before you visit.

While Crossrail looks to be the future of transportation in London, the Roof Garden above the station has certainly developed its own importance to the area.  The 300-meter-long garden is open daily until 9 PM and sometimes later for events, which are typically held in the garden’s 60-seat performance space.  The Bloom cultural event is held here every summer, so you’ll want to keep your eyes out for it as the festival encourages performers to find new and interesting uses for the space.  Even outside of summer, you can find a wide variety of plants from all over the world.

One Canada Square is the granddaddy of the entire development, the building that kicked off Canary Wharf’s development and turned it into the major center it is today.  It was the tallest building in London until the construction of the Shard, and it’s home to some of the world’s biggest businesses as well as shops, bars, and restaurants.  Doctor Who fans might recognize it as the original home of Torchwood, but that’s guaranteed not to be the only thing that brings you to Canary Wharf’s most famous building.