You are here: Home / Columns / London Fiver / The London Fiver – Five Places to Visit in London for Winston Churchill History 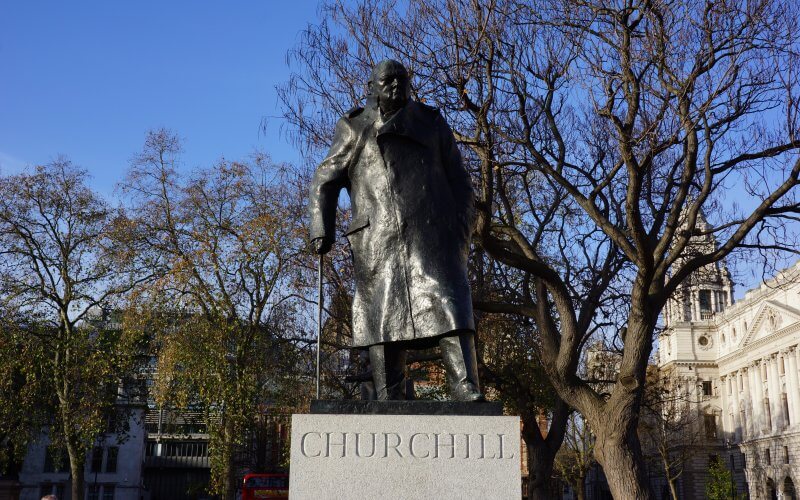 Certainly one of the greatest Prime Ministers in the history of the United Kingdom, Winston Churchill cemented his place in the annals of Britain as the country’s leader during World War II.  While not without a fair amount of controversy, Churchill was arguably the right man for the job during one of Britain’s toughest periods, and his defiant attitude reflected that of the people. Naturally, London was Churchill’s home base for much of his life, and his political career and a number of places throughout the city have felt his influence.  We have identified five such Churchill-related locations that you can visit, and if you think we left one out, you can let us know in the comments.

The Churchill War Rooms is part of the Imperial War Museums and served as Churchill’s headquarters during World War II.  Churchill held 115 cabinet meetings in the Central War Room, which also included a dormitory for staff, private bedrooms for important government officials and military officers, and a switchboard for telephone operators.  Besides the cabinet room, one thing you’ll certainly want to see is Churchill’s bedroom and office, which included BBC broadcast equipment for the PM to address the nation.  Today, the War Rooms have been preserved, and there is also a permanent exhibit on Prime Minister Churchill.  The cost to enter with a donation is £25 and without is £27.50.

Located on the grounds of Westminster Abbey, the Church of St. Margaret also served as the Parrish Church for Members of the House of Commons, including Churchill.  It was in this church that Winston married his wife, Clementine Hozier, in 1908 and also where several of his family members and his children were married.  Churchill also let Members of Parliament here for a Thanksgiving service on VE Day in 1945

Claridge’s is a five-star hotel in Mayfair with significant ties to Winston Churchill.  While the Prime Minister was certainly enamored of many London hotels, often taken dinner with his cabinet and other officials at the Savoy, Ritz, and Duke’s Hotel, Claridge’s is the only one that he called home. It’s a bit of a sad reason why, as the General Election of 1945 was a surprise defeat for Winston and left he and his wife temporarily without a home.  The two of them lived in the sixth-floor penthouse for a time, though Churchill himself wasn’t too pleased about living that high off the ground.

Naturally, you can’t visit places important to Winston Churchill without going to Parliament.  From his time as a simple backbencher MP to Home Secretary, First Lord of the Admiralty, Chancellor of the Exchequer, and finally Prime Minister, this is the single most important place to his life besides Downing Street.  While you can’t visit 10 Downing Street, the Palace of Westminster does offer tours and even opportunities to visit the House of Commons and the House of Lords (provided they aren’t in session).  It is in the Members’ Lobby for the Commons that you’ll see Churchill’s statue alongside that of his successor, Clement Atlee, as well as Margaret Thatcher and David Lloyd George. There is also a brilliant statue of Churchill in Parliament Square just outside the Houses of Parliament (pictures above).

From the most important places in his life to the most important place of his death, St. Paul’s Cathedral was the site of Winston Churchill’s funeral on January 30, 1965, after his body lain in state at Westminster Abbey.  His funeral saw 3,500 guests, including Queen Elizabeth II, who normally did not attend funerals for commoners but had a special political relationship with Churchill during the early days of her reign.  A bronze plaque in the cathedral commemorates his state funeral, and the crypts is home to the Winston Churchill Memorial Screen, which stands in line between the gravesites of Admiral Lord Nelson and the Duke of Wellington. 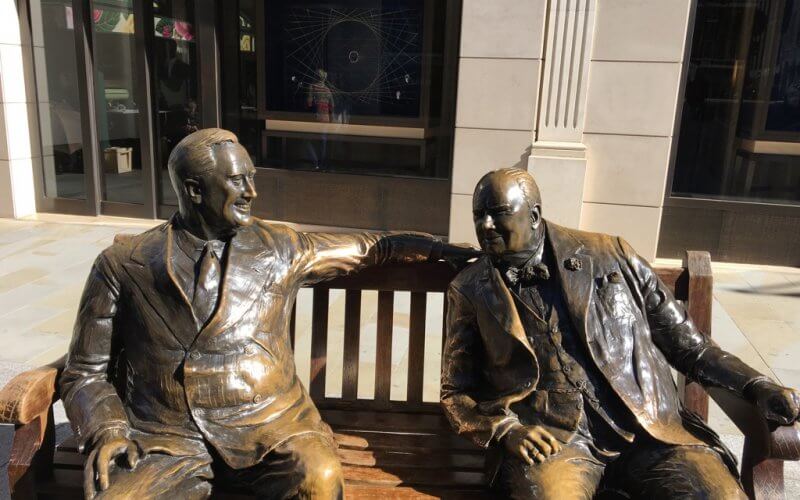