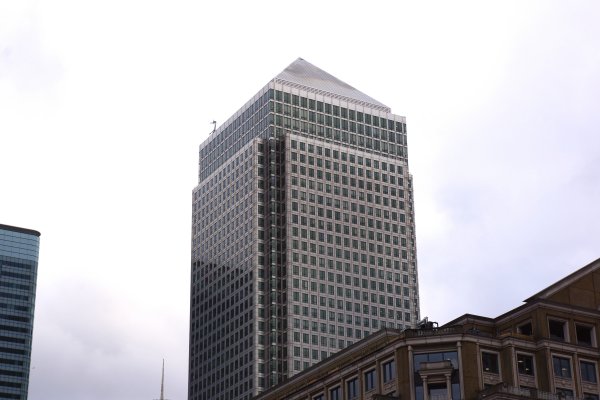 Located on the site of the former West India Docks, One Canada Square is not only a skyscraper that puts a stamp on the London skyline; it’s a symbol of economic revitalisation.  For over a hundred years, the West India Docks were amongst the busiest ports in the city, but by the 1960s, business started to dwindle until the port finally closed in 1980.  The British Government then developed the London Docklands Development Corporation to stimulate the area economy and things really picked up when Canadian firm Olympia & York took control of the project in 1988.

Olympia & York then hired the architecture firm of Cesar Pelli & Associates, Adamson Associates, and Frederick Gibberd Coombes & Associates, who designed a tower similar to 200 Vesey Street in New York City, another building owned by Olympia & York.  The architects wanted to make sure that the building had a uniquely British character, however, and changed the design to be slightly more reminiscent of Elizabeth Tower and to use steel to honour Britain’s history as an industrial nation.  The original plan was to make the building 55 storeys and 864 feet high, but that proved to make it high enough to be an obstruction for flights coming into Heathrow, and the firms had to take off five floors to comply with air traffic regulations.  The building was then made denser to make up the difference.

Sir Robert McAlpine & Sons then started in construction in 1988, but the construction was slow, and after a worker strike in 1989, Lehrer McGovern took over and then contracted out most of the work to Balfour Beatty.  Prior to being finished One Canada Square actually overtook Tower 42 as the tallest building in the United Kingdom, a feat capped off with the finishing of the building’s pyramid roof.  The roof weighs more than 100 tonnes, is 131 feet high, and is constructed from 100,000 nuts and bolts.  Construction finished in August 1991, and the Duke of Edinburgh was present for the opening ceremonies on the 26th of that month.  It took some time for the tower to fill up completely since most of the tenants had not moved in at the time of the opening and a global recession prevented other firms from expanding their operations.

Of course, this was not the end of notable moments in the building’s history.  In 1992, One Canada Square was subject to an attempted terrorist attack by the Irish Republican Army.  The bombers had orchestrated a way to do the maximum amount of damage to the building but were thwarted because the IRA members illegally parked their van containing the bomb, causing them to get noticed by One Canada Square’s security guards.  Terrorists managed to elude the guards, but the bomb proved defective and ended up doing no damage.  More recently, a nineteen-year-old Harry Gallagher got in trouble with the police for illegally climbing the building, sneaking past security and climbing the pyramid roof.

Today, the fifty floors contain nearly forty tenants with businesses ranging from JP Morgan to railway company High Speed 2.  While much of the building is not open to the public (unless you sneak past like Mr. Gallagher, which isn’t recommended), you can still take it in from the ground level and enjoy a meal and cocktails at One Canada Square Restaurant.  Open for breakfast, lunch, and dinner; the restaurant also offers “bottomless” dinner and brunch.  While you’re in the area, be sure to explore everything the district has to offer.  For Star Wars fans, the Underground station also served as the filming location for the Imperial base on Scarif in Rogue One.