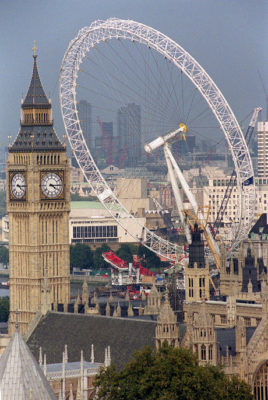 The 1990s were a time of great change in Greater London.  The country started out with a Conservative Government in Downing Street at the beginning and a New Labour government at the end.  IRA attacks gave way to the Good Friday Agreement and a new period of peace.  Docklands along the Thames that had grown stagnant found new life as economic centres.  New construction projects changed the face of the city as the London Eye began to go up in time for the new millennium.  By December 31, 1999, the city would be a completely different place, boldly charging into a new era.

1990 was the twilight of Margaret Thatcher’s government, beginning with the Poll Tax riots on 31 March in central London.  Passed the previous year by her government, the “Community Charge” was a flat-tax that proved unpopular with groups across the socioeconomic spectrum, and their distaste for it erupted in the city, beginning at a demonstration at Kennington Park that was attended by approximately 200,000 people.  By the end of it, 113 people had been injured and another 339 arrested.  It was one of many of Thatcher’s actions that led her to resign roughly eight months later, to be succeeded by John Major.

Major would continue as PM for about seven years.  From 10 Downing Street, he would lead the UK through conflicts in the Persian Gulf and Bosnia, as well as confronting violence at home.  Early in his premiership, the Provisional IRA launched a mortar attack on Downing Street meant to assassinate him and his cabinet. It would not be the only act of violence by the group during the decade, which would be followed by the truck bomb in Bishopsgate in 1993, mortar attacks on Heathrow in 1994, and several more.  Despite this, Major’s government began a series of peace talks with the IRA which would eventually lead to the signing of the Good Friday Agreement with the next government.

Major’s government was one beset by conflict within and without.  Despite handily winning a general election 1992 and then a leadership challenge in 1995, he would go on to lose the 1997 general election to Tony Blair and his “New Labour” movement, which had been gaining in popularity.  Labour would remain in power for thirteen years, in part due to its successes on many fronts.  As mentioned, Blair’s government would be responsible for the finalisation of the Good Friday Agreement and a measure of peace brought to London (with the exception of the breakaway “Real IRA”).  What’s more, one of Labour’s campaign promises was to bring back a centralised municipal authority to London.  The government held a referendum in 1998 on the creation of the Greater London Authority, with the boroughs supporting the new authority with 72.01% of the vote.  The Greater London Authority Act passed Parliament in 1999, and the new government would be established in 2000 with Ken Livingstone as the new Mayor.

While the new municipal authority was being built from the ground up, many new buildings were beginning to do the same.  Perhaps one of the greatest changes to the city’s skyline came with Canary Wharf.  The area had ceased being used as docklands in the 1980s and towards the end of the decade, talks had begun to transform the area into office space.  Canadian company Olympia & York purchased the project in 1988 and opened their first office tower, One Canada Square, in 1991.  Eventually owned by the Canary Wharf Group, One Canada Square would be joined by 1 Cabot Square, 25 Cabot Square, 25 North Colonnade, and 33 Canada Square by the end of the decade, leading to a revitalisation of the area.  The growth at Canary Wharf would also spur London to changing its zoning regulations to permit more office towers so that it could compete, leading to a number of the city’s famous buildings being constructed in the next decade.

London’s culture was also changing rapidly during the decade.  After becoming a global phenomenon in the 1960s, British popular music took off again three decades later.  Led by groups such as Oasis, the Spice Girls, Blur, and more, a second British invasion ensured that many of England’s musical talents would continue to change the world, even while musicians such as Freddie Mercury passed away.  His tribute concert at Wembley Stadium on 20 April 1992 would see an attendance of 72,000 and, thanks to international broadcasts, a global audience of over one billion.  Another death to impact the city would be that of the former Princess Diana in 1997.  Flowers piled up outside of Kensington Palace and Buckingham Palace.  Her funeral would take place in Westminster Abbey and mourners would line up for miles along the streets to watch her funeral procession.

As the decade drew to a close, a new symbol for the city began to take shape in 1998.  Previously known as the Millennium Wheel, the idea was to have this Ferris wheel ready in time to ring in 2000.  Its pieces were floated on barges down the River Thames and it slowly rose out of the river to create an addition to the city’s skyline.  Tony Blair hosted a ceremonial opening on 31 December 1999, though the Eye would not open to passengers until March the next year.  Its rise symbolised the rise of a new London, one ready for the challenges and rewards of the future.