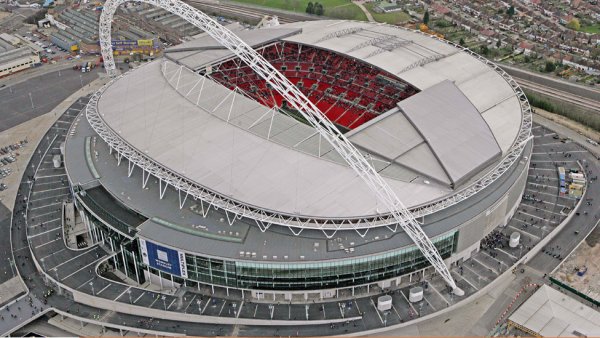 Wembley, London contains one of the most important venues in all of Britain.  Wembley Stadium is the name given to two different football stadiums in Northwest London, with the first one having been torn down to make way for the more recent structure.  Used not only for football matches, it has been the site of some very important performances and concerts over the years.  Come with us on a journey through time as we look at the history of both Wembley Stadiums and what they have meant to the UK.

The first Wembley Stadium was constructed in 1923 as part of the British Empire Exhibition and the contract for the exhibition buildings included the stadium, from which it received its original name of Empire Stadium.  This stadium was designed by Sir Robert Alpine, who designed it to hold 125,000 people, and built by architects Sir John Simpson and Maxwell Ayrton.  The goal was to have it completed in time for the Football Association Cup Final, and the reason Wembley Hill was chosen as a site may have had something to do with it being used as a football pitch as early as 1880.  To get the building finished in time, a total of 3,000 workers spent a grand total of twelve months on its construction.  The final cost was £750,000, which would be nearly £34.5 million in today’s money.  It was built entirely of concrete and its famous towers stood 50 metres tall.

The original plan for the stadium after the Exhibition was the same as all the other buildings—demolition.  Sir Arthur Elvin began buying up the buildings to tear them down, however, on the suggestion of Sir James Stevenson, the chair of the Empire Exhibition, Wembley Stadium was spared.  It quickly became the home of English football as the national stadium and was one of the first pitches to be referred to as “hallowed ground”.  However, from the end of the Exhibition until 1951, the only team that England played there was Scotland.  After that year, England began opening the stadium to matches against other international teams, who considered it a great honour to play there.

Of course, the stadium became known for much more than football.  The Rugby Football League held its Challenge Cup there from 1929 until its demolition.  It was also a major part of the 1948 Olympic Games as the setting for hockey, football, and equestrian competitions.  However, it’s second most well-known use was for concerts.  The first one of these was the London Rock n’ Roll Show in 1972, an all-star event that featured the greats from the 1950s including Little Richard, Jerry Lee Lewis, Chuck Berry, Bo Diddley, and more.  Its most famous use as a concert venue was perhaps the British venue for Live Aid, featuring David Bowie, Queen, The Who, Paul McCartney, U2, and pretty much everyone who was big in the 1980s.  Michael Jackson set a Guinness World Record there for seven sold-out shows with a total of 504,000 (approximately 74,000 per show).

However, all things must come to an end, and the original Wembley Stadium officially closed in 2000.  Demolition occurred in 2002 with the redevelopment plans commencing in 2003.  Work on the new stadium was to begin at that time, but a combination of legal and financial troubles interrupted construction numerous times, meaning that it wasn’t completed until 2007.  Foster & Partners and HOK Sport designed the stadium and construction was by Australian firm Brookfield Multiplex, with Cleveland Bridge & Engineering Company constructing the new stadium’s arch.  The new stadium had even more construction workers on the site than the original Wembley at 3,5000 and it can hold 90,000 spectators.  Another interesting fact is that, at 2,168 toilets, it has the most of any event venue in the world.

Today, as with the original Wembley, the stadium remains the home of the England national football team, though it continues to host other events and concerts.  When not playing host to one of these events, the stadium is available to tour at cost of £19 for adults.  The tour lasts about 75 minutes and provides you with an in-depth look at the old and new stadiums’ history as well as letting you into the players’ tunnel, the changing rooms, and even the Royal Box.  The VIP tour at £55 includes even more access with a private guide.  If you want to visit, the closest Tube stations are Wembley Park and Wembley Central on the Jubilee, Metropolitan, and Bakerloo lines.  With so much history, how can anyone pass that up?