You are here: Home / Culture / Buildings / 30 St Mary Axe: 10 Interesting Facts and Figures about the Gherkin 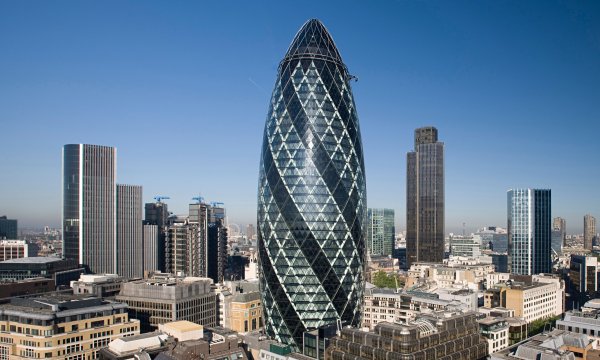 30 St. Mary Axe, otherwise known by its more colorful name of “the Gherkin” is one of several buildings that define the London skyline. Of course, this building is more than just a comparison to a type of cucumber. It has a rich history all its own and is home to several important firms. So what facts are there to know about one London’s most interesting skyscrapers? You may be surprised to discover facts about its origin, structure, and more.

The 18 lifts in the Gherkin have the ability to transport 378 people at a speed of 8 metres per second. If you want to take the stairs, there are 1,037 steps in each of the buildings stairwells.

The Gherkin has 24,000 metres squared of glass, but only one piece of carved glass—the lens at the top. The way the Gherkin is structured, there are six lightwells with 792 mechanised windows behind the dark spirals on the building to help disperse natural light throughout the building. 7,429 panes of glass cover the exterior, which is enough to cover five football pitches.

Searcy’s is the private member club at the top three floors of the Gherkin and boasts itself as being the highest in the city. It cost £290 per ticket for a non-member to get in for Searcy’s New Year’s Eve festivities. During the day, the restaurant is available to employees of the building.

Curves and glass are nothing new to the designers of the Gherkin. The building’s architect was Norman Foster, of the firm of Foster and Partners. In addition to the Gherkin, Mr. Foster has also designed London City Hall, the renovations of the Reichstag in Berlin, and Wembley Stadium.

As Wide as it is Tall

Well, not quite, but the circumference at the Gherkin’s widest point is 178 metres, which is only two metres less than its height of 180 metres. The building’s footprint is only 50 metres in diameter.

The previous building at 30 St. Mary Axe was the Baltic Exchange, the headquarters of a global marketplace for sales and shipping information. However, the Provisional IRA set off a bomb there on 10 April 1992 that did extensive damage to the building. After English Heritage determined that the damage was too pervasive to make a complete restoration possible, the Baltic Exchange sold the grounds to Trafalgar House, who began planning on a new building that would eventually become the Gherkin.

What May Have Been

The original building to replace the Baltic Exchange was also designed by Foster and Partners and was called the Millennium Tower. At 92 floors and 386 metres, it would have been the tallest building in Europe. However, Heathrow Airport objected because it would create problems for the airport’s flight plans and others on the grounds that such a tall building would be out-of-scale with the City of London. Jump forward to 2012, when construction finished on the 306 metre tall Shard.

Over 35 kilometres of steel were used in the building’s construction.

Preserving the Past While Building the Future

While the Baltic Exchange was razed to make way for the Gherkin, much of the building was preserved due to its historic nature. The stained glass from the Baltic Exchange War Memorial was sent to the National Maritime Museum. Additionally, the remains of a Roman teenage girl were unearthed during the construction of the building in 1995. Her body remained on display at the Museum of London for twelve years until she was given a funeral at St. Botolph’s Church and reburied near the Gherkin.