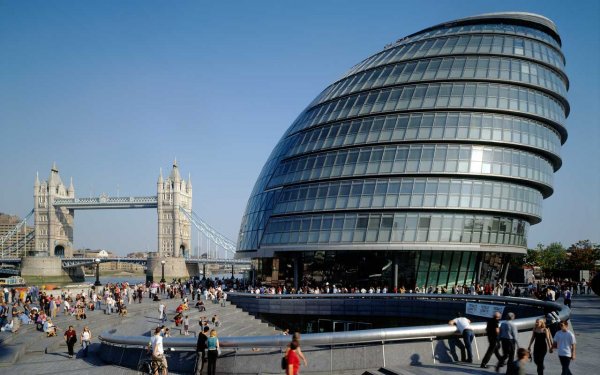 In 1986, Margaret Thatcher’s government dissolved the Greater London Council and its responsibilities were transferred to the government or to boards comprised of members from each borough’s council. In the late 90s, under Tony Blair’s government, the idea of a central London authority was explored again, this time modeled on the America idea of a Mayor-Council system. The new body was established with the Greater London Act of 1999 and officially formed in 2000. Two years later, the Greater London Authority would get a new home with the simply-named City Hall. A futuristic-looking building, it houses the offices for the Mayor, the London Assembly, and numerous city departments. Have a look at ten facts about this municipal building for 21st Century London.

City Hall has 10 floors that cover over 185,000 square feet with an exterior made up of 2100 tons of steelwork and 7,300 square metres of glass. The glass façade has a diameter of 45 metres, which makes it as wide around as the building is tall at a height of 45 metres. In 2010, this caused some controversy as the bill to wash those windows was said to be around £140,000 per year.

If the design features on City Hall seem to mirror the Gherkin, that’s no coincidence. Architect Norman Foster designed both buildings and is very fond of using glass in his designs.

What’s in a Name

Simply calling it City Hall was an homage to the America-inspired structure of the Greater London Authority, which was an attempt by the British government to establish a format that was more efficient than the Greater London Council. The bulbous nature of the structure has lent itself to comparisons of a car headlamp, an ashtray, and a fencing mask. Nicknames for City Hall include “The Snail” and “The Onion.” Both former Mayor Ken Livingstone and current mayor Boris Johnson have given it some ruder nicknames. 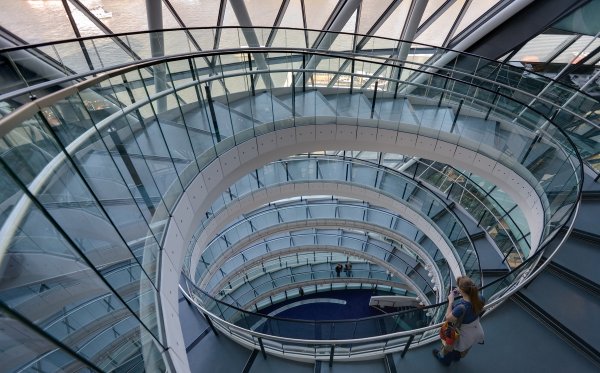 City Hall has a long, spiraling walkway that goes from the ground floor all the way to the top, though it is closed to the public when the Assembly is in session (people can still attend Assembly meetings during this time). The ascent is said to resemble a flight on the London Eye.

Outside is a sunken amphitheatre known as “The Scoop”, which is open as a performance venue during warmer months.

The glass and open nature of the architecture once receive a complaint from Assembly members that it was “too open-planned” for use by separate political parties. They sought out an alternative building plan, but nothing came of it. Today, four parties comprise the representatives of the London Assembly, with Labour controlling the chamber with 12 members, the Conservatives with 9, Green Party with 2, and Liberal Democrats with 2.

City Hall cost £43 million and actually isn’t owned by the Greater London Authority, but operates on a twenty-five year lease.

The top level contains a venue space known as London’s Living Room, which is for hire to private events and organisations for a rate of £5,000 per night. In addition to corporate and charity events, the Living Room was even the location for an after-party following the premiere of the film Minority Report.

There were approximately fifty-seven entries into the contest for the City Hall building before Lord Foster’s design was chosen.

In keeping with the trend to more energy-efficient government buildings, City Hall has several features meant to reduce its energy consumption. The roof of the building has solar panels, the air conditioning system uses cold ground water instead of refrigeration, and that water is then used to flush the toilets. The deep floor plan allows for heat to be collected in the building’s core and then dispersed throughout. City Hall’s spherical form helps reduce energy consumption by minimising the surface area. It is self-shaded and naturally ventilating, with all office space windows capable of opening to let in fresh air.