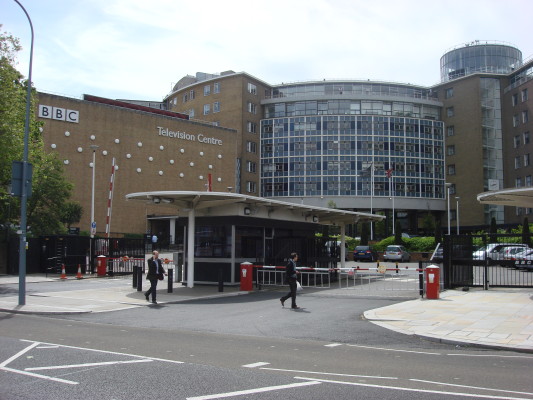 From 1960 to 2013, Television Centre was the hub for the BBC’s television broadcasts. Hosting everything from BBC News to Blue Peter, it became one of the most prolific buildings in London. However, starting in 2007, the BBC decided to decrease the use of Television Centre and slowly moved its different productions to other studios. Now operating out of Broadcasting House, the BBC is currently redeveloping the site to include homes and shops as well as new studios. With so much history packed into one location, have a look at some interesting facts you may not have known about Television Centre.

It was believed that the building’s unusual shape was the result of Dawbarn drawing a question mark on a piece of paper, but an article in BBC Quarterly proposed the circular design well before he was hired. The central ring was referred to as “The Doughnut” by staff.

The children’s programme Blue Peter had a garden that was part of the Television Centre complex. It also had a number of Blue Peter Pets over the years. In the garden was a bronze statue dedicated to Petra, the first of the programme’s pets. Petra was named by a viewer write-in contest and was a mainstay of Blue Peter for 15 years, but in 2008, Blue Peter editor Biddy Baxter revealed the that the first Petra died as a puppy after her first appearance. She was replaced with a similar dog and the secret was kept for years because executives thought it would be too upsetting for their audience.

Prior to the building closing in 2013, the BBC led tours through Television Centre until the last day. Before it closed, demand was so high that the Beeb was running as many as 18 tours a day.

At the centre of the complex was a statue of the Greek sun god Helios, which was meant to symbolise the radiation of television around the world, much like the sun’s rays. The two reclining figures at the base of the statue are meant to represent sound and vision, primary components of a television broadcast. Helios was meant to be part of a working fountain, but employees in the offices overlooking the fountain found it was too noisy.

The BBC had a policy at Television Centre of not storing scenery and sets were destroyed when they were no longer needed. However, one important piece managed to survive all this—the TARDIS. The final TARDIS used during the classic era of Doctor Who was moved around the building to keep it from being put on a truck for disposal, eventually finding its way to the audience foyer for people to have their pictures taken with it until it was replaced with a more “updated” version reflecting the new programme.

The Real IRA placed a bomb outside Television Centre on 4 March 2001. The Real IRA split off from the Provisional IRA in 1997 following the cease-fire. Fortunately, no one was hurt and the bomb did only minor structural damage to the building.

The last drama to be shot at Television Centre was The House of Elliot, which wrapped in 1994, and told the story of two sisters who began their own dressmaking business and fashion house.