You are here: Home / History / The History of the London Fire Brigade 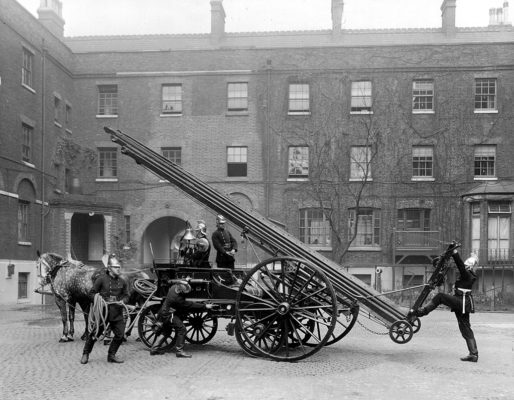 Once upon a time, if you didn’t have enough water, the only solution to a fire was to get out and hope it didn’t burn down the whole neighbourhood.  Various amateur organisations existed to fight fires, especially after the Great Fire of London, and by the 18th Century, many insurance companies had set up their own fire brigades to protector their customers.  Eventually, necessity required that these various groups began working together.  By the 1860s, demand was so great that the insurance companies began to lobby the British government to provide fire protection as a public service as the cost was proving too great for the firms.

The Metropolitan Fire Brigade Act was then passed in 1865, with the MFB forming officially in 1866.  The Metropolitan Police were originally going to take control of the organisation, but when that proved too difficult, the responsibility was turned over to the Metropolitan Board of Works.  The first chief officer of the MFB was Captain Sir Eyre Massey Shaw.  Shaw was originally from County Cork, Ireland, and had served in the British Army before resigning to lead the joint police and fire brigade in Belfast.  After the head of the London Fire Engine Establishment, James Braidwood, died during the Tooley Street fire of 1861, Shaw was asked to lead the group and transitioned to head of the MFB.

Shaw would be a massively important figure in firefighting for the city.  In addition to writing several books on the subject, Shaw introduced the famous pointed brass helmets, the design of which would influence firefighting headgear throughout the world.  Shaw greatly encouraged the use of steam figure engines, installed telegraph lines in fire stations to boost communications, increased the number of street escape stations, and revolutionised life-saving procedures.  In 1889, the London County Council took over the running of the MFB and regularly clashed with Shaw.  By the end of his leadership in 1891, he was known as the “Fire King.”  For all his service, he was knighted by Queen Victoria on his last day in office.

In 1904, the LCC changed the organisation name to the London Fire Brigade and the first motorised fire engines were introduced.  Turntable ladders arrived in the next year and could reach heights of 82 feet.  By 1913, the city had 85 stations and 3 river stations.  The year also saw the first use of the breathing apparatus.  The LFB would later introduce the Two Watch system to keep firefighters well rested, limiting them to a 72-hour work week instead of being on the clock 24/7.  One of the biggest additions to the LFB started in 1933 with the construction of the London Fire Brigade Headquarters on the Albert Embankment.  King George VI opened it in 1937 and it became the organisation’s home for seventy years.

During World War II, the country’s fire brigades were conglomerated into the National Fire Service for the duration of the war, with the LFB re-established in 1948.  With the creation of Greater London in 1965, the LFB absorbed the Middlesex Fire Brigade and brigades for West Ham, East Ham, Croydon, Essex, Hertfordshire, Surrey, and Kent.  With the disbanding of the Greater London Council in 1986, Thatcher’s government created the London Fire and Civil Defence Authority to manage the LFB.  This was transitioned to the London Fire and Emergency Planning Authority under the Greater London Authority Act of 1999.  The LFB moved its headquarters to Union Street in 2007.  Today, it is the largest fire brigade in the United Kingdom and the fourth largest in the world (behind Tokyo, New York City, and Paris).