You are here: Home / History / A Brief Guide to Swinging London – What Was It? 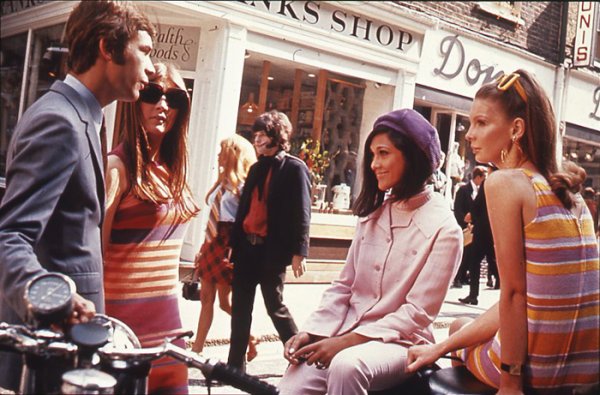 Yeah, baby!  London was a happening place in the 1960s where music, fashion, and counter-culture attitudes came together.  Whereas London culture since World War II had been more conservative, young people of 60s London rebelled in nearly every way possible, pushing the limits in mind-bending ways.  It seemed perfectly natural that the stereotypical “stiff upper lip” would eventually give way to a wild, experimental culture that produced the Rolling Stones, mods, Monty Python, and some of the first fashion models. This cool, hip new culture became known as “swinging” and London was very much the center of this 60s counterculture.

Swinging culture was like an explosion of all the repressed feelings that English society had been keeping down, and London was its epicenter.  One of the first major changes was in the era’s fashion, with bright colors, miniskirts, go-go boots, sharp suits, and more crushed velvet than you can shake a stick at.  Most of this fashion could be found on Carnaby Street in Soho and geared itself towards the hippies and the mods.  Mods as a subculture started in the city in 1958, but gained a greater following in the 60s, partly due to the popularity of London bands such as The Who, The Small Faces, and The Rolling Stones.

Of course, these bands weren’t the only ones that operated within the city.  There’s little question that The Beatles were the biggest musical act of the 1960s and, despite being from Liverpool, they certainly had London under their spell.  Places such as Abbey Road, the Apple Boutique, the London Palladium, and the site of their rooftop concert at 3 Saville Rd are just some of London locations located with Beatlemania.  Other groups that reigned on the music charts and the London streets included The Kinks, Lulu, The Animals, and Dusty Springfield.  Psychedelic rock also began to take hold as bands like Cream, Pink Floyd, and The Jimi Hendrix Experience all got their starts in London.  Of course, if you wanted to listen to any of the bands, it was necessary to turn into a pirate radio station that broadcasted into the city from the North Sea. 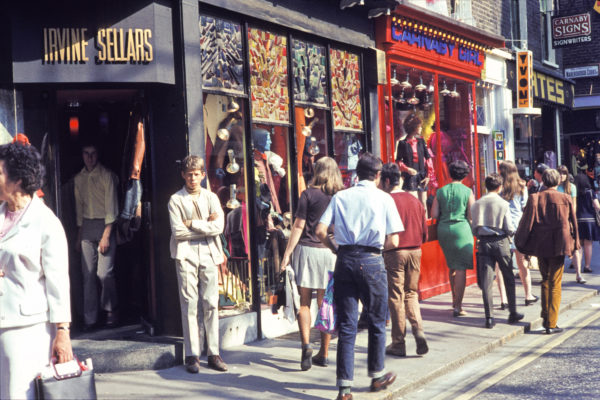 60s London was also when some of the first popular fashion models came about, and no one came to symbolize this more than Jean Shrimpton.  Shrimpton was not only one of the world’s first supermodels, but she was also recognized as “the face of Swinging London”, often photographed wearing the very clothes that made Carnaby Street such a popular fashion destination.  Along with Pattie Boyd and Twiggy, the three exemplified the look of the Swinging London woman.  One of the more infamous models of the period was Christine Keeler, who is known more for her involvement in the Profumo Affair than her modeling.  Her extra-marital relationships with both a Soviet agent and Secretary of State for War John Profumo was one of the contributing facts that led to the end of Prime Minister Harold Macmillan’s government.

And roading through the streets of London, besides the scooters of the mods, was the brand new Mini.  The Mini’s small size made it perfect for zipping around the city and finding parking.  Sometimes its roof would come adorned with the Union Jack, a national symbol that became increasingly popular in design.  The Mini became so popular that it featured heavily in the 1969 film The Italian Job as the getaway cars and are shown throughout the film being able to squeeze through narrow spaces and perform very exacting spaces.

In the modern era, Swinging London can seem like an alien world of ancient times.  In the past couple of decades, films have attempted to revitalize the swinging culture.  In the 1990s, the Austin Powers film trilogy poked fun at the culture and the James Bond films.  The Boat that Rocked, which released in 2009, played it straight, taking place on one of the pirate radio ships and heavily featuring the music, fashion, and attitudes of the era.  These films help us appreciate what Swinging London did for the world, embracing freedom and exploration of culture that persists to this day.