You are here: Home / Site News / Featured / A Brief Overview of What Life Was Like in Medieval London 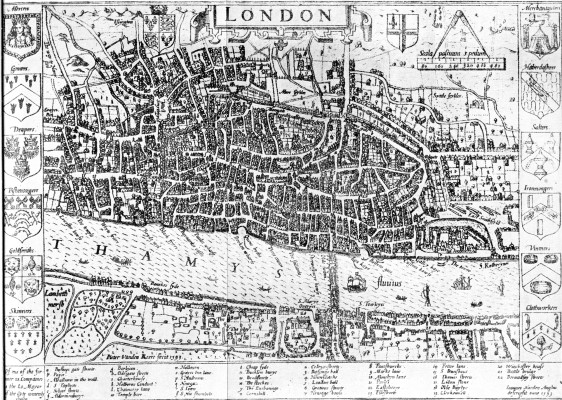 Christmas Day of 1066 ushered in a new era for London. It was on that day that William of Normandy was crowned King William I and the Medieval Period truly began for the city. Shortly after his coronation, William began construction of the Tower of London, just outside the City of London, to help consolidate his power. At the time, it was the tallest structure in London, meant to lord over the city’s inhabitants to remind them who their new leader was. William’s descendants expanded the Tower and eventually became the residence of the monarchy as the kings became more English than Norman.

William’s son, William II, began Westminster Hall in 1097, which had the effect of further solidifying London as the capital of England. Prior to this, the heart of political power was wherever the king held court, but the building of the hall was the beginning of the Palace of Westminster and the centralization of that power in one location. While kings still used the Tower of London, the Palace of Westminster became their home and the City of London became the economic center, while Westminster became the seat of government.

Of course, between the Tower and the Palace was where most of the people lived and as these political and economic concentrations formed, more people flocked to the city. What was once a populace of 8,000 people at the end of Roman times became a population of 18,000 by the 12th Century and 120,000 by the end of the Medieval Period. Houses were mostly made of wood with thatched roofs and as the city became more packed, the homes grew from one to three stories, with upper levels often reaching out over the streets.

Wealth certainly had its effect on the lives of the people of London. Homes of the poor or middle class were more likely to be wooden, while the wealthy could afford to build with stone. Having a trade was absolutely vital to finding work and making a living, which required the joining of any number of the city’s guild halls which handled every skilled position from carpenters to fishmongers. Young men generally started as apprentices at the age of 12 with their parents signing them over to a master who would care for, apprentice, and train him. The more successful one was at his trade, the more he could be guaranteed to be among the city’s wealthier citizens.

Monetary wealth wasn’t the only concern in London and as the old saying goes, “You can’t take it with you.” Religion, specifically Christianity, played a major role in the daily lives of citizens and left a significant impact on the landscape. While a church had stood on the site of St. Paul’s Cathedral since the 7th Century, with the coming of the Normans, work began on a new building, now known as “Old St. Paul’s” after a fire destroyed the previous church in 1087. During much of the Medieval Period, it was the largest structure in London. What’s more, nearly every job requiring higher learning was run by the church, including schools and hospitals.

When it comes to self-governance, it was Henry I that gave London its first charter that established the city’s legal system, including a sheriff and judge selected from among the people (also known as the liberty of the city), establishing London as its own separate entity. Richard I, Henry’s great-grandson, went a step further by acknowledging London’s right to self-govern in 1191 and overseeing the election of its first mayor and aldermen in 1192.

However, despite this stability, being a capital city didn’t always mean that life was calm and peaceful. During the First Barons’ War, Louis VIII of France came to London and was hailed as the new king in defiance of King John, that is, until John’s death, at which point the barons switched their loyalties to his son, King Henry III. Over one hundred years later, the Peasants’ Revolt of 1381, the rebels invaded the City of London and took control of the Tower of London, executing several prominent leaders, burned buildings, and looted much of the city. Later on, during the War of the Roses, the city saw itself torn between the Yorks and the Lancasters until Henry Tudor defeated King Richard III at the Battle of Bosworth Field and became King Henry VII, beginning the Tudor dynasty and bringing the Medieval Period to a close.