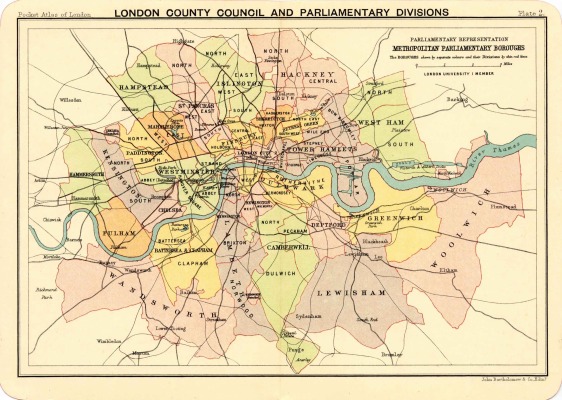 Though London started off as a small square-mile city, over the centuries it has grown to encompass many towns and villages that surrounded it, becoming what we know as Greater London. There are about thirty-two boroughs in total: twelve inner boroughs and twenty outer boroughs. While they are all under the power of the Greater London Authority, each borough also has its own council responsible for administration of services to its residents. Check out a few of some of the more interesting borough names and a little of their histories.

As far back as 1062, the recorded name of the borough was Lambehitha, meaning “a landing place for lambs”. As you might guess, this was a shipping place for lambs coming to or leaving the city. By 1255 the name had changed to Lambeth. The borough is located directly across the River Thames from the borough of Westminster and the City of London, which is appropriate since one of its best-known landmarks, Lambeth Palace, is the home of the Archbishop of Canterbury. Another top landmark is the London Eye, providing great views of the entire city.

The borough of Wandsworth was formerly part of the County of Surrey until 1889. The area’s original name was Wandesorde and Wendelesorde in the Domesday Book, meaning “enclosure of a man named Waendel”, who is believed to have been a wealthy Saxon. The River Wandle is also thought to be named for him. The Battersea Arts Council is one of the borough’s best-known landmarks.

Despite a village with the name of Bexley existing there, for much of the past few hundred years, the borough of Bexley had very few settlements. The original name was Byxlea, meaning “box tree clearing”. As with many parts of the city, it grew and became populated as London expanded. Interestingly enough, while it is serviced by the bus route, there isn’t an Underground station in the borough.

Formed in 1965 along with Greater London, the Borough of Ealing was formed, in part, out of the Municipal Borough of Ealing. Its Saxon named around the 8th Century was Gillingas, which means “place of the people associated with Gilla”, and morphed over time to “Illing”, “Gilling”, and “Yilling”. Ealing became the standard sometime in the 19th Century. Archaeological evidence suggests that Ealing had been settled since the Iron Age and really became part of London during the Victorian era as it turned into a suburb of the city. One interesting note is that this borough serves as the setting for The Sarah Jane Adventures, following former Doctor Who companion, Sarah Jane Smith.

One borough formed through the combination of the Municipal Boroughs of Hammersmith and Fulham. Hammersmith has two potential origins that are subject to debate. One speculates that it comes from Hammoder’s Hythe, a refuge belonging to a guy named Hammoder. Another assumes it was a combination of “hammer” and “smithy” as a place for metalworking. Fulham is a little more straightforward, being from the Anglo-Saxon name “Fulla” and a “hamm” being a bend in the river. The Football Clubs of Fulham and Chelsea are both located in the borough and the Hammersmith Apollo is a major performance venue.

Covering much of the East End, Tower Hamlets gets its name from its most famous landmark, the Tower of London and all the hamlets that surrounded it. William the Conqueror built the tower right outside the City of London and made it the tallest structure in the area in a shower of power and authority over the defeated Londoners. Tower Bridge, Victoria Park, Canary Wharf, and Whitechapel can all be found within the borough.

Lewisham comes from another Saxon word, Levesham, which meant “the house among the meadows”. It was reportedly settled by a pagan named Leof who burned his boat when he got there. Like Bexley, there isn’t an Underground station in the borough.

The area was first settled during the Roman occupation of Britain, and the name Southwark originates from the Anglo-Saxon Suthriganaweorc or Suthringa geweorche, meaning “fort of the men of Surrey”. It was recorded in the Domesday Book as Sudweca. A few famous buildings can be found in the borough, including City Hall for the Greater London Authority and its newest resident, the Shard.

Meaning “valley of the crocuses”, its name came from the Anglo-Saxon phrase “croeas deanas” (a crocus is a type of flower). The borough once had an airport that started as an airfield for protection against zeppelins during World War I. Some of its landmarks include Nestle Tower, Croydon Palace, the Shirley Windmill, and the BRIT School.

One theory posits that the name originates from a heathen temple, or hearg, built on Harrow Hill. The earliest recording of the name is Gumeningae Hergae, which was a shrine of the Gumeningas tribe. Ironically, the Church of St. Mary’s is located near to the site where the temple was located.