Rambling is a popular activity throughout the United Kingdom, but you don’t have to leave the city to find an excellent walk.  The streets and sidewalks of London hide many excellent trails that will provide you with the best views of this great metropolis.  From the outer reaches of Greater London to the boroughs’ greatest landmarks, Transport for London has outlined several walks that visitors and residents alike can take to get healthy, see the city, or maybe just get away from the hustle and bustle.  Have a stroll down one of these walks and let us know your favourites in the comments.

The Capital Ring walk is seventy-eight miles of urban nirvana, broken down into 15 walks if you don’t feel like walking the whole route.  The ring might not take you into the inner-most parts of London, but it does go through Merton, Greenwich, Haringey, and Ealing, amongst others.  Some of the sights along the route includes Eltham Palace, Wimbledon, the Thames Barrier, and Olympic Park.  To keep you on the trail, it is marked with circular white discs that feature Big Ben and a directional arrow in open spaces and large aluminum signs to let you know which way to go. 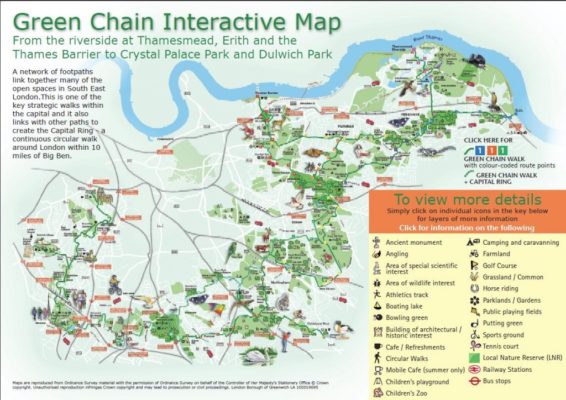 Maybe you feel the need to get away from the concrete jungle and really experience some greenery, but can’t get out to the country.  The Green Chain makes for the perfect walk, then, as it takes you through the city’s woods and parks, crossing fifty miles of South and East London.  There are eleven sections that will take you through Bostall Woods, Oxleas Meadows, and Middle Park with sights that include Eltham Palace, the Thames Barrier, Crystal Palace Park, and the Horniman Museum and Gardens.  Signposts will help keep you on the path regardless of whether you’re wandering the streets or the woods. 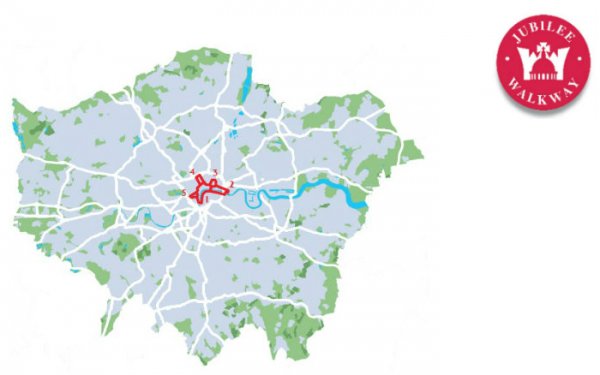 Queen Elizabeth II celebrated her Diamond Jubilee in 2012, and this walk is one of many things that were named in honour of the occasion.  For her sixty years of reign, the route is sixty miles long and broken up into ten sections of six miles each and link many of the sites from the 2012 Summer Olympics.  Locations that you will see along the walk include Olympic Park, O2 Arena, and Regents Park as well as places significant to Her Majesty such as Buckingham Palace and Kensington Palace.  The greenway is marked with pavement slabs and the one outside of Buckingham Palace was unveiled by the Queen herself. 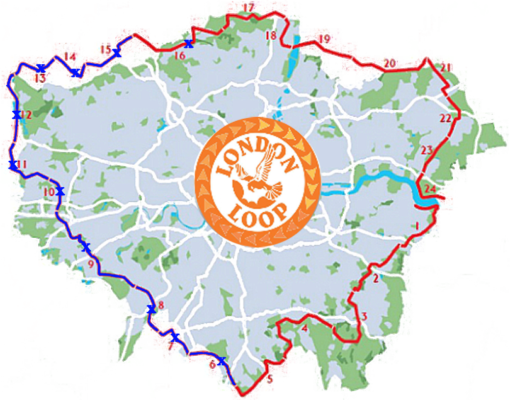 The Capital Ring gets you through an inner part of London, the LOOP takes you to the outer reaches of greater London, almost perfectly straddling the city’s border.  The LOOP is the longest of the walks at a total of 150 miles, though it’s broken up into twenty-four sections full of flat surfaces or low hills that make the journey a breeze.  Some of the sights you’ll pass by include Enfield Lock, Hall Place, and Hainault Forest County Park.  County area path markers are a white disc featuring blue flying kestrel while city signs have a green walking man on them.

If you don’t want to venture out too far, but still want to see many of the city’s most famous landmarks, the Thames Path will keep you close to the river where you can see Westminster Palace, the London Eye, and Tower Bridge, among other major sights.  The path follows the river from the lost floodplains of Richmond to the marshes in the east for a total of seventy-nine-and-a-half miles.  Both the North Bank and the South Bank have four sections each, so you can pick the side of the river you want to walk.  The Thames Path National Trail symbol marks the path from West London to Greenwich, and then a Thames Barge is the symbol the rest of the way.