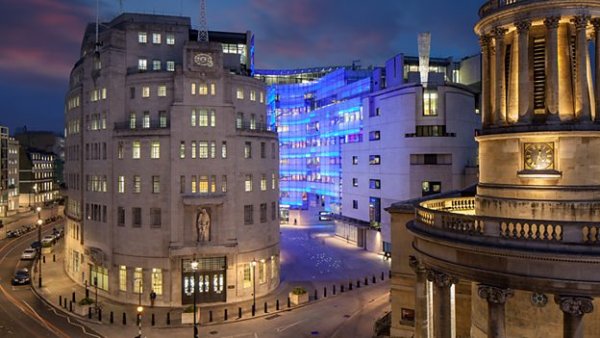 Headquarters of the BBC, Broadcasting House represents the totality of the BBC’s media offerings across radio and television.  Originally a building for radio programmes, the expansion in the early 2000s transformed the building into the new centre of the BBC’s activities.  The BBC moved its news divisions out of Television Centre and into the new wings, creating the largest single location for live broadcasts in the United Kingdom.  Today, BBC Broadcasting House is a bridge from the corporation’s past to its future, existing across old and new buildings and home to timeless and cutting-edge media.

When the BBC formed as the British Broadcasting Company in 1922, its main broadcasting centre for radio was Marconi House (names for the inventor of radio) in the Strand and later Savoy Hill.  The company then received its Royal Charter in 1927 and rebranded itself as the British Broadcasting Corporation.  With its new status, a primary headquarters was needed, and construction of Broadcasting House began in 1928.  The building was designed by G. Val Myer in the Art Deco Style and meant to be the corporation’s first purpose-built home for radio broadcasting.  For this purpose, Val Myer worked with BBC civil engineer M.T. Tudsbery.

It was constructed of Portland stone with nine floors above ground and three below.  Raymond McGrath designed the interior, continuing the Art Deco style inside to include the studios, green rooms, dressing rooms, and the music and dance chambers.  While other buildings of the era included a light well in the centre, Broadcasting House’s core was where the studios were housed.  Its light, steel-framed shell and brick structure were meant to act as acoustic buffering, and the curved nature of the building’s edifice resulted in its comparison to a ship.  Part of the reason for this is that nearby residents complained about the shadow it would cast over Langham Street, so he altered it to be a bit asymmetrical and honour the right of ancient light easement that the neighbourhood had.

It opened in 1932, and the BBC’s programmes were slowly moved over until all of them were housed within the structure.  Henry Hall and the BBC Dance Orchestra provided the first musical broadcast on 15 March, and Stuart Hibberd read the first new bulletin on the 18th.  The last broadcast at Savoy Hill took place on 14 May, and Broadcasting House opened officially the next day.  Not too long after opening, the occupants discovered that the passing trains from the Bakerloo line could be heard in the below-ground studios, but fortunately, this didn’t show up in the recordings.  Large windows were built into the ground floor with the thought of turning it into retail spaces, but the corporation expanded so rapidly that this never occurred.

Broadcasting House would then see a revitalisation that began in 2003 and has earned as much controversy as it has praise.  The idea was to combine many of the corporation’s operations, bringing over the radio and television news from Television Centre and BBC Worldwide from Bush House.  The renovation began by knocking down some of the post-war building extensions and refurbishing the interior.  At the same time, a new east wing was constructed with a design that mirrors the original structure in shape.  The Egton wing was finished in 2005 and later renamed after BBC DJ John Peel in 2012.

The second phase would be a rear wing that bridged the original and Peel wings and was partly the reason for the controversy.  The original architect, Richard MacCormac, left the project over disagreements with the BBC, who wanted to reign in the rising costs, while MacCormac didn’t want to make revisions to his design.  Bovis Lend Lease then completed the construction in 2010 and the building was turned over to the BBC in 2011.  The ultimate result was a £1 billion construction cost and with continued maintenance costs that the BBC is still trying to reduce.  Queen Elizabeth II opened New Broadcast House on 7 June 2013, roughly ten years since construction began.

Despite the controversial cost, the BBC now has the most advanced media centres not only in Britain and the second phase won “Programme of the Year”.  It has grown from twenty-two studios to over fifty that cover everything from BBC Radio 1 to BBC Persian Television.  It has a great deal of artwork with statues by Eric Gill that mirror the Art Deco of the original Broadcasting House, a glass-and-steel cone called Breathing by Jaume Plensa, and Mark Pimlott’s “Word”, a courtyard that curves very slightly to mimic the curvature of the Earth.  Blending form and function, past and future, Broadcasting House is a media castle in the heart of London.