You are here: Home / Culture / Movies / London’s Fate: Visions of a Future London in Film and Television 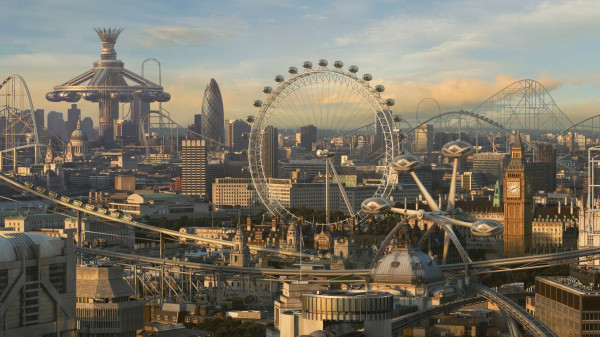 The future is bright—sometimes.  Science-fiction is a genre that reaches into the future to make suppositions about what’s to come or what could happen.  Since the earliest days of the genre, London has played a role in stories such as War of the Worlds and with the advent of film and later television, these tales portraying London’s future have always been popular.  Most of the best-known stories have involved alien invasion or dystopia, typically with the good guys coming out on top.  We’re going to explore this future for both good and bad futures, ones in which the heroes win and futures where they lose.

The dystopia has long been popular in British media and film.  Long an outlet of political opinion, sci-fi films such as the 80s adaptation of George Orwell’s Nineteen Eighty-Four or Alan Moore’s V for Vendetta.  Nineteen Eighty-Four is Orwell’s opus of what would happen if Communism took over the United Kingdom starring John Hurt as Orwell’s doomed protagonist, Winston Smith.  Smith must navigate a London in which every movie you make and every word uttered is watched by the Thought Police.  The phrase “Big Brother is watching you” is still used today to criticize the intensity of government surveillance.  While Orwell was concerned about the left dominating, Alan Moore worried about the right doing the same.  His graphic novel V for Vendetta was adapted into a feature film in 2005 with Hugo Weaving and Natalie Portman, where the ultra-right Norsefire Party puts political prisoners into concentration camps and experiments on them, outlawing anything against their religion, and generally turning London into a dark place to live.  London landmarks play key roles in the film from the Old Bailey to the Houses of Parliament.

Another type of dystopian future that appears in British films are the disaster stories.  One of the earliest was 1961’s The Day the Earth Caught Fire, in which nuclear testing sends the planet hurtling ever closer to the Sun.   Another film warning about the horrors of nuclear power is the television film Threads, another Cold War sci-fi tale in which nuclear war breaks out between the US and Soviet Union, resulting in the bombing of the UK and society’s regression to a primitive state.  Society breakdown occurs almost universally in these stories, as it does in 28 Days Later, in which a virus turns the infected into ravenous, zombie-like creatures.  In an interesting twist, while the movie Dragonfire appears to be a medieval or fantasy story, it actually takes place in London’s future where the reawakening of dragons has seemingly regressed society back to the Middle Ages.  Lastly, Children of Men imagines a world in which natural births have become a rarity.

The other popular genre when it comes to depicting London in film and television is an alien invasion.  The Quatermass serials are one of the excellent examples of this as aliens come to Earth looking to destroy us for some unspecified reason, usually attacking London.  Day of the Triffids was adapted from the novel in 1962 in which plant-like creatures invade the city.  The combination of these two led to the creation of Doctor Who, which would feature its own London invasion numerous times, the first being in The Dalek Invasion of Earth in 1964, which was later adapted into a film with Peter Cushing as Dr. Who.  More recent films featuring alien invasion include Joe Cornish’s Attack the Block, in which a near-future council estate is attacked by animalistic aliens.  The 2014 Tom Cruise and Emily Blunt film Edge of Tomorrow sees the pair in London battling aliens, then being resurrected and sent back in time at each failure to learn how to defeat the invaders.

In other futuristic films, London is almost ancillary to the story, such as Star Trek Into Darkness, which sees an early scene of the film take place at a Federation facility in the city.  Neil Gaiman’s television series, Neverwhere, leads the protagonist into another world that exists under London, with the city appearing towards the beginning and end of the story while everything takes place in London Below.  And while London is but a small part of these tales, as long as people continue to dream of the future, the city will continue to appear in stories that attempt to guess at where the city will be years from now.