Justice has long walked the halls of the Old Bailey, wherein lies the Central Criminal Court of England and Wales.  This is in contrast to the Royal Courts of Justice, were civil cases and appeals are heard.  The building is named for nearby Old Bailey Street, which followed the lines of one of the original fortified Roman walls.  The location was convenient for the speedy transfer of prisoners to Newgate Prison after sentencing.  In medieval times, court was held in nearby rooms and in a later court building constructed in 1539 until they were destroyed by the Great London Fire of 1666 and then rebuilt in 1673 with an open design to help prevent the spread of disease.

The original building constructed in 1673 was three-stories of Italianate brick with the Sessions House Yard for litigants, witnesses, and court personnel to gather.  The building also had a section of high, spiked wall where prisoners were held to keep them from escaping.  When the building is described as “open air”, what that meant was that the court room had one wall open to the elements.  Above levels were completely closed off and mainly used for court personnel, including a dining room for the justices.  Trials were a public spectacle that invited members from all classes of society to attend, and even some criminals, hoping to learn how to defend themselves should they be caught.

By the 18th Century, the Old Bailey got its first major facelift.  In 1737, the open air portion was walled up and the rest of the building was enclosed, as much to keep out the weather as it supposedly was to keep out the clamour of the crowd outside.  The ground floor was refaced with masonry bricks and many of the windows altered to reflect the architectural style of the times.  A passageway was also built that connected the court with Newgate to further facilitate prisoner transfers.  Unfortunately, the work that closed off the wall led to the exact reason why it was open originally, as an outbreak of typhus in 1750 led to the deaths of 60 people, including two judges and the Lord Mayor.  The introduction of nosegays and aromatic herbs helped to cut down on the spread of disease, and even some judges still carry nosegays or other flowers. 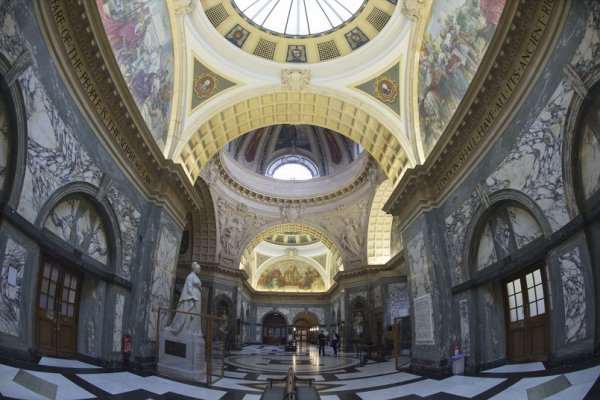 Another reconstruction followed in 1774 with a semi-circular wall built in front of the bail dock which added extra security as well as further keeping out any communication between the prisoners and the public.  The passage between the Old Bailey and Newgate was enclosed.  In one of the wiser moves for construction, witnesses were given their own waiting room so court personnel wouldn’t have to fetch them from the pub for their case.  Though there was only one courtroom, a mahogany table was installed for use by the lawyers to make their arguments.  It was this incarnation of the court that became known as the Old Bailey.

The increasing number of trials by the 19th Century necessitated the building of another courtroom in 1824, converted from another building nearby.  Several more were added over the next several decades with increased seating to reflect the many roles found in the modern justice system including the jurors, attorneys, justices, court reporters, witnesses, and spectators.  This proved to be not enough still as the needs of justice increased, and in 1898, the Royal Institute of British Architects commissioned six designers to submit plans with no limitation on style but wanting something impressive and dignified without being too ostentatious.

The ultimate design came from E.W. Mountford and opened in 1907.  The Neo-Baroque building was decorated with numerous symbols of its purpose, including the new 12-foot gold leaf statue of “lady of justice” holding scales in one hand and a sword in the other, situated on top of its new 67-foot dome which has become an iconic symbol of justice in Britain.  Additionally, the exterior and interior were completely redone in stone and marble, respectively, as well as statues and paitnings that feature Labour, Art, Wisdom, and Truth.  It also featured new waiting frooms for tinesses and many other then-modern conveniences.

However, the building was not without its troubles in later years.  The Old Bailey was heavily damaged during the London Blitz and would be restored completely by 1952 with paintings commemorating the bombing inside the Grand Hall.  In 1973, the IRA exploded a car bomb outside the courts and a shard of glass from the explosion is preserved inside.  Today, all of these sites and more are available for tourists to visit, though it’s best to keep in mind that the Old Bailey remains a working courtroom, so do set up your visit in advance.  If you’re really lucky, you may even get to see a trial.