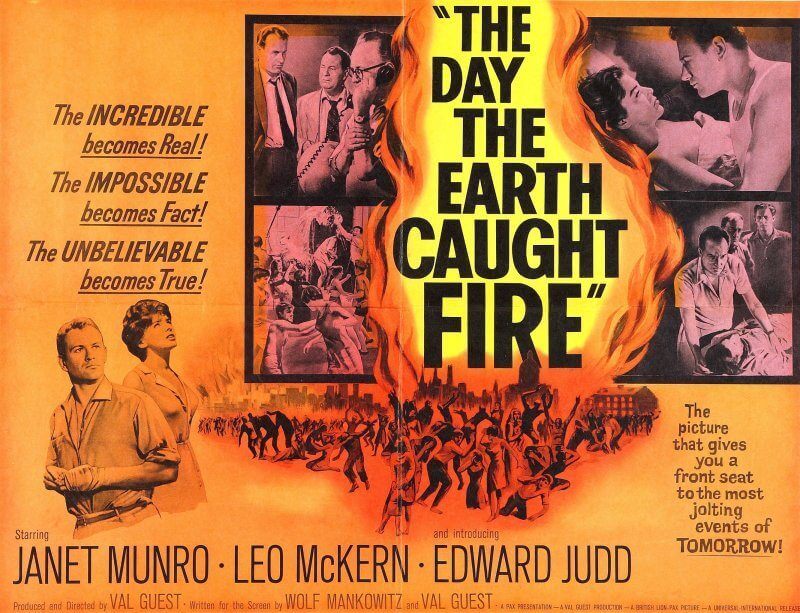 England is arguably the home of science-fiction thanks to Mary Shelley and her novel Frankenstein, so it stands to reason that London would be a prime location for the setting of many sci-fi films.  However, most of the genre’s movies that take place in the city seem to fall into either being about an alien invasion of a dystopian future.  Yet there still manage to be a great number of science-fiction movies set in the United Kingdom’s capital that highlight the consequences of nuclear testing, aliens living (somewhat) peacefully among us, and both the advantages and horrors of future technology.  Let us know what London Sci-Fi films you love in the comments.

In the aftermath of Godzilla’s popularity, French film director Eugene Lourie first wanted to make a monster movie set in Japan, then moved it to the British Isles so the titular kaiju could destroy some well-known landmarks.  Captured in Ireland, Gorgo eventually comes to London as part of a circus show (ala King Kong) in Battersea Park before predictably breaking loose and running amok.  Of course, Tower Bridge, the Palace of Westminster, and other landmarks (or at least miniatures of them) feel the monster’s wrath throughout the course of its rampage.

Quatermass XPeriment/Quartermass and the Pit

The Quatermass films have been terrorizing London with strange science since 1955 when The Quatermass Xperiment sees a deadly alien virus transform an astronaut into a dangerous monster who of course goes on to threaten London.  1967’s Quatermass and the Pit also utilizes the capital as ground zero for weirdness when construction workers in the London Underground uncover an ancient spaceship that may hold clues to the origins of life on Earth.  Westminster Abbey, St. Nicholas Church, and other London locations appear throughout the movies.

The fourth film in the Men in Black franchise and the first not to feature Tommy Lee Jones or Will Smith, MiB: International sees new recruit M (Tessa Thompson) join the London branch of the alien policing organization under the mentorship of H (Chris Hemsworth).  While the pair of agents travel all over the world to solve a mystery of galactic proportions, you get to see a good bit of London throughout the movie, including the futuristic Canary Wharf Tube Station, the Reform Club, Ludgate Hill, and The Black Friar pub on Queen Victoria Street (you won’t be able to enter MiB London HQ here though).

In a future London where global warming has caused the Thames to flood, Rutger Hauer plays a cop on the trail of a mysterious serial killer that turns out to be a monster which is either a demon, an alien, or a product of mad science (the film never quite gets around to explaining).  Ludgate Hill, the Harley Jam Factory, and Tower Bridge all get some screen time during the movie.  This film barely scrapes by as being sci-fi thanks to being set in the supposedly near future, though it’s close enough for this list.

1961’s The Day the Earth Caught Fire features an Earth that has been knocked from its orbit as a result of Cold War nuclear testing, bringing the planet closer to the Sun and rapidly increasing the world’s temperature.  The Daily Express building serves as the location where reporters write about the world’s impending doom, Fleet Street feels the effects of the ever-increasing heat, and Trafalgar Square hosts a nuclear disarmament rally during the film’s events.  Battersea Park and the Treasury Building also appear in the film.