The Museum tells the story of the Bow Street Runners, the country’s first organized police force, and the Metropolitan Police officers who walked the streets of Covent Garden in their footsteps.

Most of the Grade II listed building is now a new 5-star hotel, so this is not a large museum. But it is more about the location as you can enter the original police cells (these were for men, and there were female cells on the floor above). There are not a lot of exhibits, but the information boards tell the history of the site, policing, and social justice, including many notorious cases. And there are some great photo opportunities in the cells and standing behind the dock that was saved from courtroom no.2. 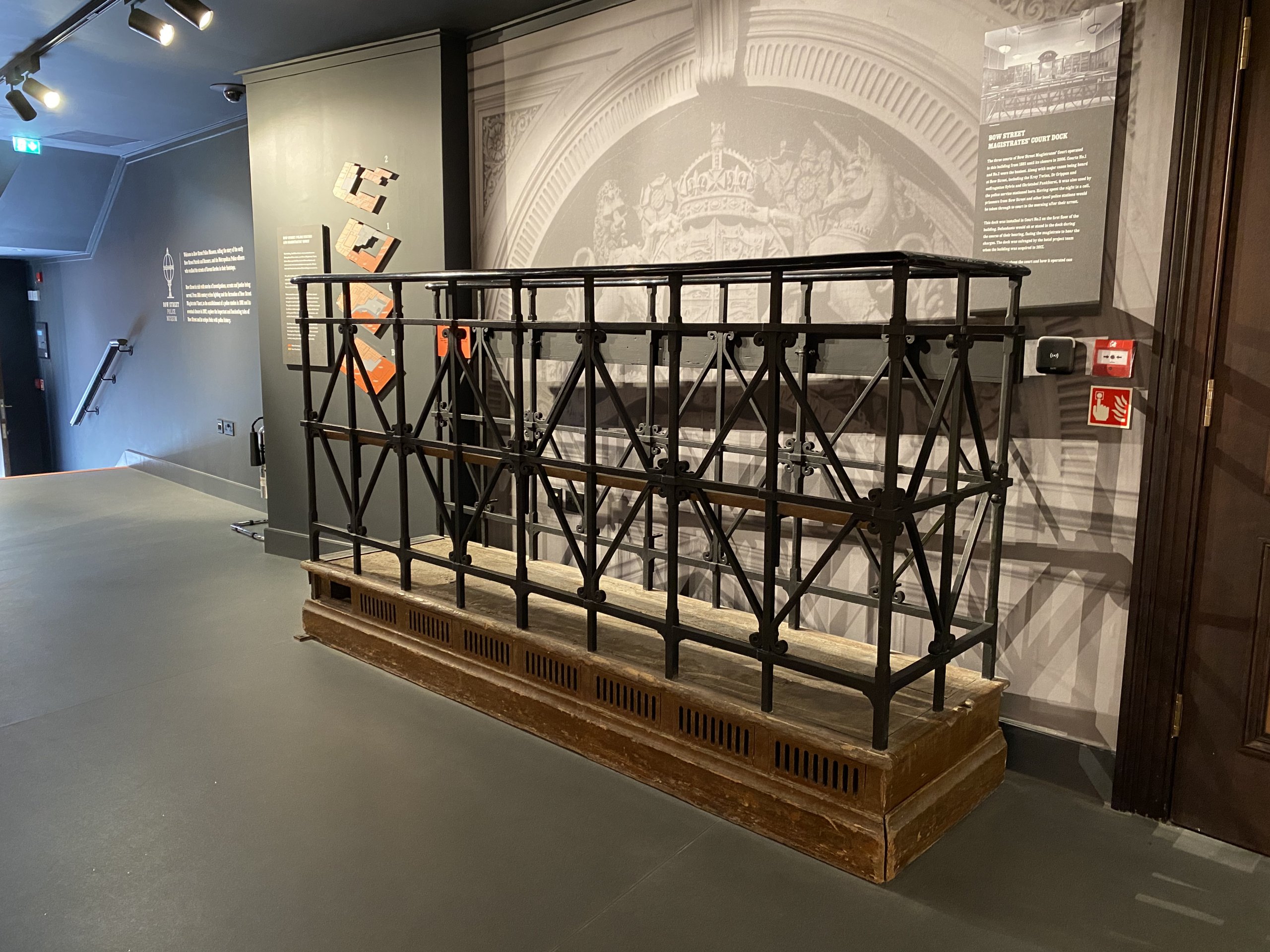 Other exhibits include early equipment used by the Bow Street Runners on patrol, including an original cutlass (sword); a collection of sketches by court artist William Hartley; and personal effects from former officers, including beat books (police officer notebooks), truncheons, and items from their time on duty at Bow Street.

Policing and Bow Street have been closely linked since as far back as 1740. Sir Thomas de Veil, a local magistrate and former army captain, opened a court in his home at No.4 Bow Street (located on the modern site of the Royal Opera House). By then, London was the largest city in Europe with a population of 700,000. He took it upon himself to investigate local crime, and he acted as a police officer, judge, and jury.

Following the death of Veil in 1746, the house at no.4 Bow Street was taken over in 1748 by another magistrate: Henry Fielding. He had been a playwright, but his political satire was considered so vicious a law was passed banning his plays from the London stage. He went on to write fiction (his most well-known work was a novel called Tom Jones, published in 1749), and he became a lawyer and then the Magistrate for Westminster. Magistrates were not funded by the government but by the people who came before them in court. Fielding wanted to change the corrupt system, so he started letting the public in to see the court cases, and he published a newspaper called The Covent Garden Journal that featured accounts from the court.

In the summer of 1749, multi-day riots rocked Westminster when a group of sailors robbed by women in the sex trade burned down several brothels. In response, Fielding created the Bow Street Runners – the forebears of the modern police service that came about a century later. Fielding was moved to set up this professional police force to tackle the problems of gin consumption: he recorded that every fourth house in Covent Garden was a gin shop.

By the end of 1750, Fielding had six trained constables to serve warrants and to keep the peace. And by 1800, there were 68 Bow Street Runners.

When Henry Fielding’s health deteriorated (gout and cirrhosis), he went to Lisbon, where he died. But his half-brother John Fielding took over the law reformation. Even though he was blind, he could identify 3,000 criminals’ voices. He became known as the Blind Beak of Bow Street.

The Museum explains how Sir Robert Peel proposed a unified system of policing for London, and the 1829 Metropolitan Police Act allowed the start of modern policing as we know it today. It initially covered a seven-mile radius from central London, which sounds small, but London was not yet the sprawling metropolis we know now. By 1834 a parliamentary committee recommended that Bow Street operations should be merged into the Metropolitan Police.

When this building opened on 4 April 1881, policing in Bow Street looked very different from the days of Sir Thomas de Veil and the Fieldings. The police station was spread over four floors and was always busy.

For the next century and beyond, the police station and courthouse were a hive of activity, and Metropolitan Police officers patrolled the streets, dealing with everything that came their way. 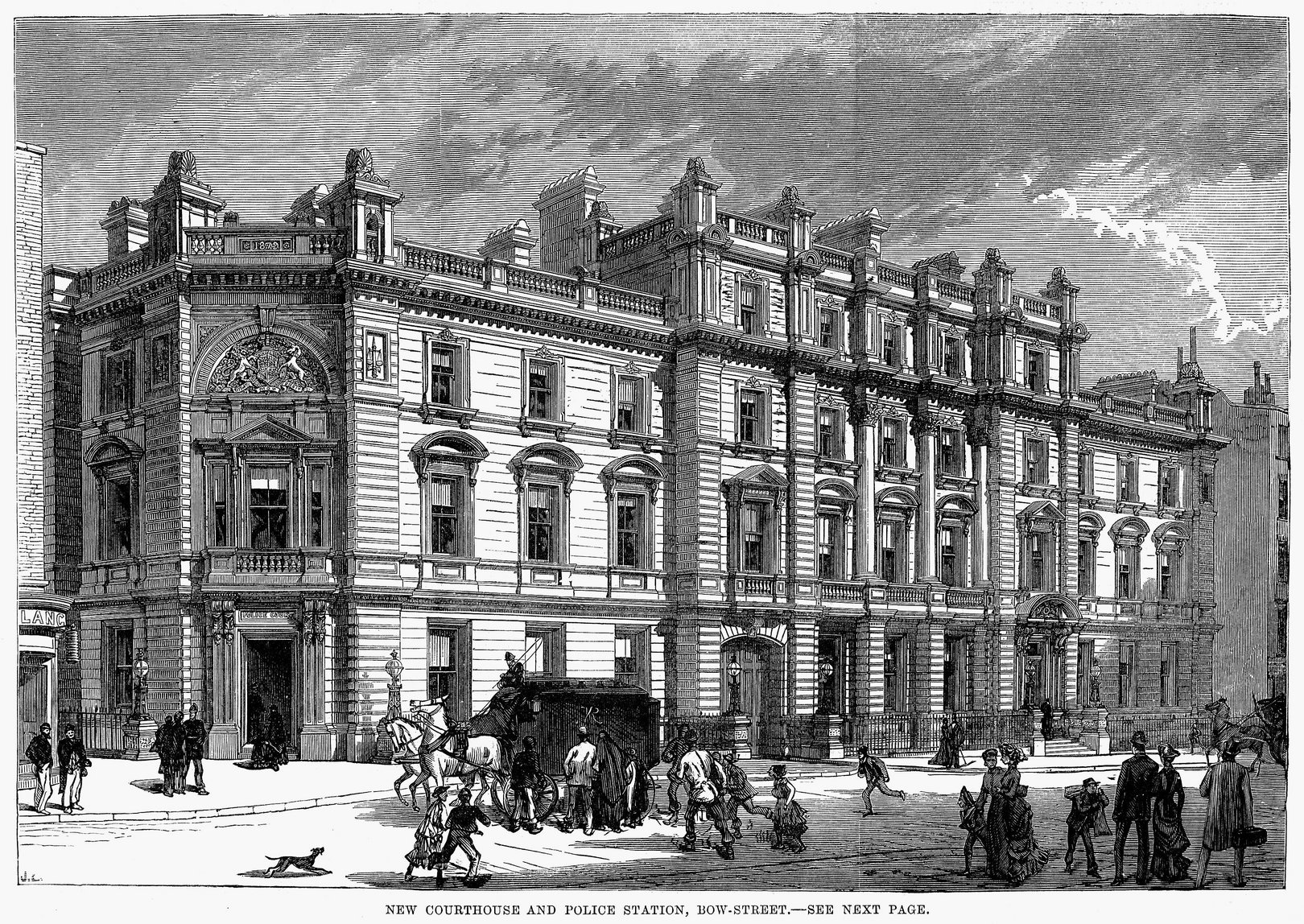 Charles Dickens, who regularly attended Bow Street as a reporter, described its appearance in the 19th century.

“There were other prisoners, boys of 10, as hardened in vice as men of 50; a household vagrant going joyfully to prison as a place of food and shelter, handcuffed to a man whose prospects were ruined, character lost and family rendered destitute by his first offense.”

(As an aside, I knew this museum design reminded me of somewhere; it’s the top floor of the Charles Dickens Museum.) 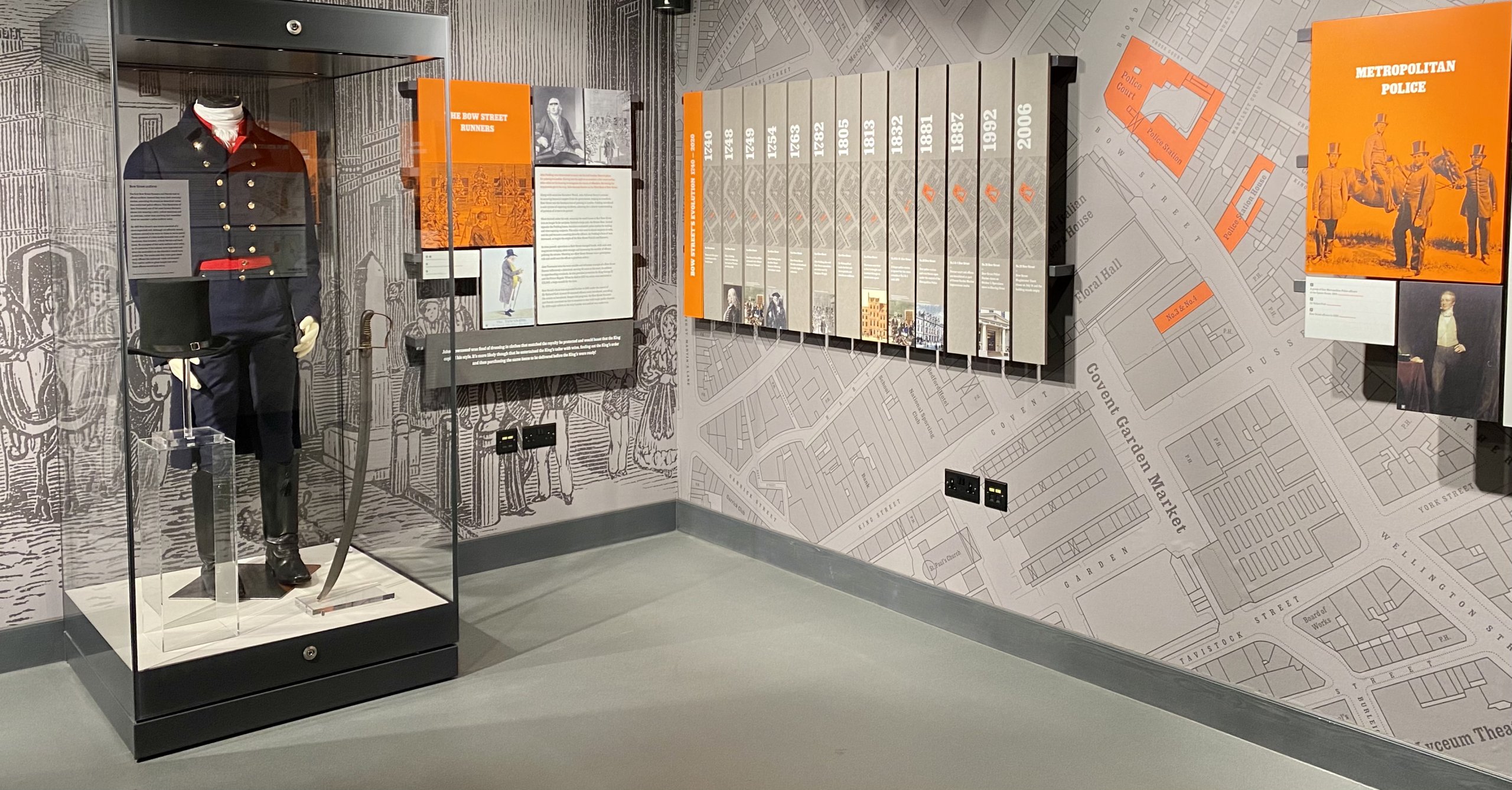 A beat was the walking route a police officer had to follow, so they really got to know the streets and the local people. Each officer worked alone and dealt with whatever they encountered on the route. The Covent Garden fruit, vegetable, and flower market would have kept the early morning officers busy, and the theatres and pubs would have been their focus in the evenings.

With today’s underfunding of police resources, there is often a cry for more ‘bobbies in the beat’ to deter crime. We will never get back to the days of an officer working alone and strolling the same few streets each day as even when an increased police presence has been needed; it doesn’t stop a determined offender from committing a crime after the officer/s have passed.

The Magistrates’ Court mostly dealt with petty crimes committed by the “sad, ill and unfortunate.” Tim Workman, the last serving Chief Magistrate at Bow Street, said, “It was the enormous variety that made Bow Street Court so interesting. From drunks in Covent Garden to mass murderers wanted by their home country appearing before you in court, you never knew what to expect.”

The Court held a unique status that enabled it to deal with extradition proceedings, terrorist offenses, and cases related to the Official Secrets Act. This brought a string of notable cases to Bow Street, including IRA terrorist cases and the extradition cases against the former dictator of Chile, General Augusto Pinochet. The Museum shares the tales of many of those who found themselves up before Bow Street’s judges, including the Kray Twins, Dr. Crippen, Oscar Wilde (on charges of gross indecency), Casanova, and suffragettes Sylvia and Christabel Pankhurst and Mrs. Drummond. The big-name cases were held in the oak-paneled courtroom no.1.

The suffragettes were arrested for causing a breach of the peace in 1908 and were given prison sentences at Holloway Prison.

In 1968, James Earl Ray appeared here. Ray assassinated civil rights activist Martin Luther King Junior on 4 April 1968 and fled to Canada and then London. He was stopped by passport control at Heathrow Airport and brought to Bow Street for possession of false documents, as well as a firearm. He was then extradited to the US, where he was tried and sentenced to 99 years in prison for the murder.

Notorious gangsters, the Kray Twins had their initial hearing here on two charges of murder before the case moved to the Old Bailey in January 1969. They were then both sentenced to life in prison.

The police station closed its doors on 5 October 1992, followed by the court closure in 2006. The building remained boarded up for many years, so it’s wonderful to see it looking so good.

The Museum also touches on the life and times of Covent Garden, exploring how the fruit, vegetable, and flower market affected the area and the market’s closure in 1974. The area regenerated to be a shopping mecca with a vibrant nightlife including theatreland, bars, restaurants, and the Royal Opera House, which is also on Bow Street. (Discover more about the history of Covent Garden in my earlier article.)

Although people weren’t held in the cells for more than a night or two, former officers have plenty of tales of the prisoners they encountered. The cells were very simple with a bench, thin mattress, pillow, and blanket. There was a toilet in the corner.

You can enter six cells in the corridor, and each has displays, artifacts, or video.

Defendants who weren’t arrested by Bow Street police officers but were attending court in this building were kept in different court cells located next to the courtrooms. This included infamous criminals such as the Krays. 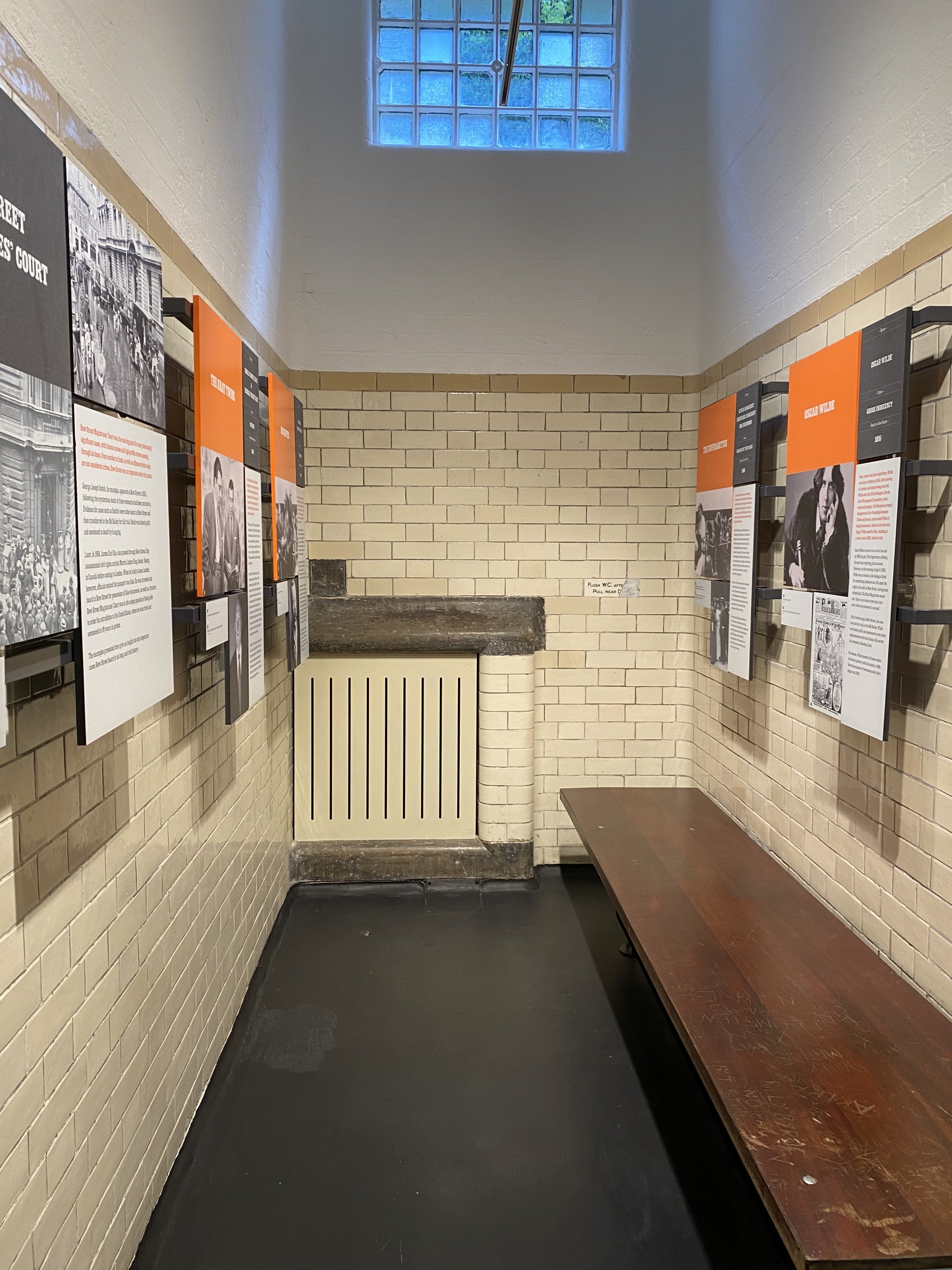 At the end of the corridor, visitors can also spend time in ‘the tank’ – the large cell was typically used to hold people arrested in the Covent Garden area for being drunk and disorderly before a morning appearance in the Magistrates’ Court. You can go in and download a 10-minute audio track to listen to oral history interviews from former serving police officers from Bow Street.

There are well-priced souvenirs and gifts on sale by the welcome desk.

Venue: Bow Street Police Museum, 28 Bow Street, Covent Garden, London WC2E 7AW (The entrance is on Martlett Court; the alleyway on the righthand side of the building.)

Bow Street Police Museum is within the new 5 star NoMad London Hotel which occupies the entire newly-restored Grade II listed building. The Museum operates as an independent charity supported initially by the owners of the building, the Sydell Group, but eventually becoming self-sufficient. There are lots of places to eat and drink nearby, but you may want to go inside the hotel as there is the opportunity for the public to eat and drink inside the building.

All visitors must pre-book a ticket for a specified time slot before arriving at the Museum. This will ensure everyone can enjoy the Museum at a safe social distance. Each time slot can accommodate up to six people.