You are here: Home / History / The Suffragettes of London 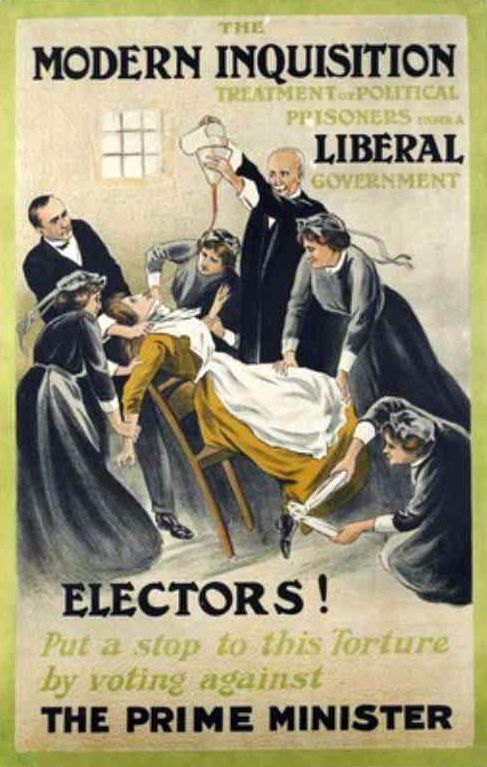 It’s said that well-behaved women rarely make history.  In this day in age, it seems as true as ever that any progress made is done by passionate activists, and the suffragettes were no different.  Now, before we move any deeper into this subject, we must make an important distinction between suffragettes and suffragists.  Suffragists, for the most part, where dedicated to peaceful means of gaining the right to vote for women.  The suffragists were succeeded by the suffragettes, who were tired of asking for the right to vote and began demanding it through acts of civil disobedience and even violence.

The suffragettes saw their origins in London in 1903 when matriarch Emmeline Pankhurst and her daughters Christabel and Sylvia started the Women’s Social and Political Union (WSPU) in Manchester.  In 1906, they moved the organization’s headquarters to London.  With the campaign slogan of “Deeds not Words”, the Pankhursts and their fellow suffragettes took to the capital’s streets in their green, white, and violet colors (GWV: Give Women Votes) to advocate for their cause directly to those in power.  They became an all-too-familiar site outside Whitehall and Parliament for the next several years until the first suffrage bill was passed in 1918.

From the headquarters at 4 Clement’s Inn in the Strand, the WSPU began to increase its influence.   Members of the WSPU began a campaign of violence that included smashing store windows and chaining themselves to railings to bring about a faster resolution of their goals.  In 1913, Christabel Pankhurst advocated for the use of explosives in their fight, and the organization’s acts turned to disrupting key industries and infrastructure including cutting telegraph cables and bombing or setting post boxes on fire.  Christabel, however, was adamant that no person was to be physically harmed.  In 1914, Mary Richardson entered the National Gallery and slashed the “Rokeby Venus” by Valazquez.  Henry Gordon Selfridge, perhaps in earnest solidarity or to keep his business intact, often flew the Suffragette flag above Selfridges and carried clothing items in their colors.

The violent acts by the SPU and others persuaded Parliament to take action—by having the suffragettes arrested.  Most were sent to HMP Holloway, then the largest women’s prison in the United Kingdom.  The suffragettes began hunger strikes to continue their activism and as a result were cruelly force-fed to keep them alive, though it had a detrimental effect on their health that helped sway more of the public to their cause in sympathy.  Hoping to curb this, Parliament passed the Cat and Mouse Act in 1913 to release the suffragettes when the cycle of starvation and force-feeding damaged their health, but would almost immediately rearrest them once they recovered.  The suffragettes also bombed the prison in 1913 to protest the treatment of their members.

Processions and demonstrations in London were regular events for the suffragette movement.  One of the first, organized by the National Union of Women’s Suffrage Societies, in 1907 saw participation from 40 organizations and 3,000 women who marched from Hyde Park to Exeter Hall in the rain and mud, earning it the nickname “The Mud March”.  In 1911 with the coronation of King George V, the WSPU organized its own coronation parade that included 60,000 women marching to a rally at the Royal Albert Hall in all manner of historical and national costumes.

The beginning of World War I halted much of the militancy of the suffragette movement as efforts were turned instead to supporting the war effort.  Suffrage found new allies in Parliament beginning in 1916, and by 1918, the right to vote was extended to women over the age of 30 who were householders, wives of householders, or owners of property.  In 1928, the Representation of the People (Equal Franchise) Act extended the right to vote to all women over the age of 21.