You are here: Home / History / The Regency Period in London 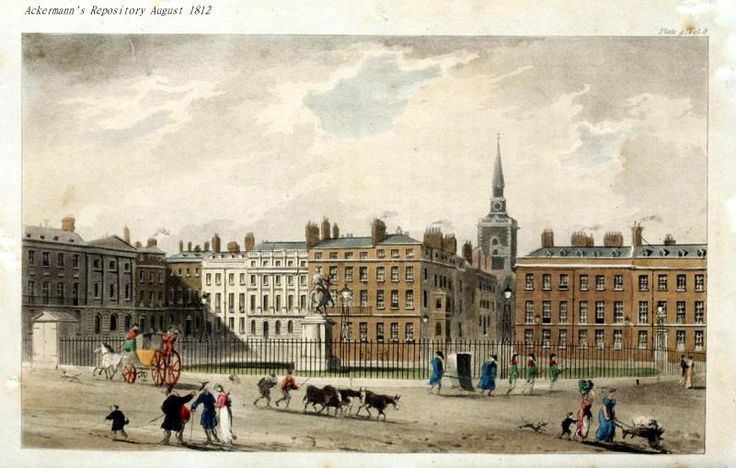 The Regency Period for Britain is one that begins with King George III’s temporary madness and the appointment of Prince George (later King George IV) as Prince Regent in 1811.  This period marked the final and permanent case of the king’s mental illness from which he did not recover.  Depending on who you ask, the period either technically ends once George III died in 1820 or continues on until the beginning of Queen Victoria’s reign in 1837.  Regardless of when it ended, the period had its own distinct architecture, literature, music, fashion, and other cultural hallmarks that separate it from the Restoration and even the early Georgian periods.

On his appointment as Prince Regent, Prince George held a fete, or celebration, at Carlton House.  Carlton was George’s residence at the time, and he sent out more than 2,000 invitations to commemorate his father going mad.  He held the party under the pretense of George III’s birthday and for French nobility exiled as a result of the French Republic.  Queen Charlotte refused to attend and would not let her daughters attend either.

Carlton House remained the prince’s home until 1826, six years after he ascended the throne because he found it no longer suited his needs.  It was at this time that he decided to turn Buckingham House into a palace after taking over the renovation work from his father.  Unfortunately, he would not live here before his own death in 1830 and his brother, King William IV did not want to live there.   What is one of the grandest royal residences in London would not be home to the monarch until Victoria moved into it.

The following year, several important events took place in the city.  One of the first was the assassination of Prime Minister Spencer Perceval.  Shockingly, he was murdered in the lobby of the House of Commons by John Bellingham, a merchant from Liverpool who blamed the government for his problems.  The aftermath saw a new Tory administration that increased freedom of the press, Catholic emancipation, and parliamentary reform.  In that year, Lord Elgin brought the last of the Parthenon Marbles to the UK and sold them to the government in 1816, and they eventually passed to the British Museum, where they currently reside.  The Gas Light and Coke company was also founded in 1812, ultimately bringing gas lighting to the city’s streets when Westminster Bridge was lit by gas lamps in 1813.

1812 saw the beginning of construction on Regent’s Canal, one of many grand construction projects by city planner John Nash.  It opened in 1816 as an 8.6-mile waterway linking the Grand Junction Canal at Paddington with the River Thames.  It’s one of several locations bearing a reference to George IV within the city, including Regent’s Park and Regent Street, all of which were projects that John Nash oversaw.  One important work Nash wasn’t responsible for was Burlington Arcade, which opened in 1819 and was the first of several shopping arcades in London and the precursor to shopping centers and malls across the world.

The growth of London’s population sparked during the Regency period as well.  While London was home to 1 million people in 1800, mid-way through the Regency, it was already up to 1.4 million, a 400,000 person increase in 15 years.  As more people flooded in, land prices soared, and the rich and poor were largely divided into the west and east parts of the city, leading to sanitation and other infrastructure problems that would not be resolved until the Victorian period.  The changes that London went through from 1811 to 1820 were merely a precursor of what was to follow.  Incredible building projects, city streets lit up at nighttime, changes in government and an explosion in population were all just around the corner.