You are here: Home / Culture / Buildings / Ten Interesting Facts and Figures about Regent Street in London 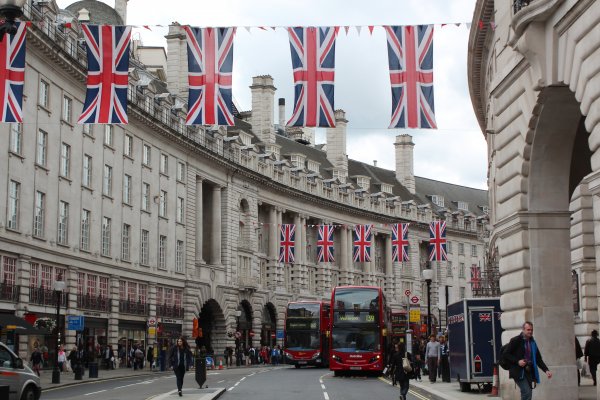 Regent Street in West London acts as the border between Mayfair and Soho and represents one of the most important shopping districts in the city.  Some of London’s oldest stores such as Hamleys and Liberty of London exist side-by-side with newer retailers including Hollister Co. and Apple.  Whatever you’re looking for, you can guarantee that you’ll find it here and it’ll be high-end, whether it’s the latest fashions, the most advanced technology, the newest toys, and the most delicious candy.  Join us as we go shopping for some great interesting facts about this retail centre.

Constructed between 1814 and 1825, Regent Street was one of the first planned developments in London’s history, intentionally constructed by the government as a commercial centre.  John Nash drew up the plans in 1811 that connected Regents Park with Pall Mall and the Prince Regent’s (the future King George IV) residence, Carlton House.  As Prince George funded most of the construction, the street was named in his honour. Regent Street is owned by the Crown Estate (the organization that manages Crown owned properties on behalf of the Monarch who surrendered control to the government in exchange for a yearly grant).

However, of all the construction done to make Regent Street possible, only one original building remains, that of All Souls Church, Langham, right next to BBC Broadcasting House.  By the end of the 19th Century, shopping needs had changed such that the smaller, older shops were no longer suitable for consumers.  Larger stores such as Selfridges and Harrods were becoming the norm, so new buildings were constructed with the rule that they should have a uniform design.

Regent Street was the location of one of the first late-night shopping events in 1850.  Shopkeepers let their stores stay open until 7 PM!

That Other Kind of Football

The National Football League has held an American football match in London every year since 2007.  As a part of the festivities leading up to the games, the league takes over Regent Street where it shuts down traffic between Piccadilly Circus and Oxford Circus for games, informational displays, performances, and chances to meet coaches and players that are geared towards tourists, expats, American football supporters, and those new to the sport.

If the Theatre is a-Rockin’

The Paris Theatre on Lower Regent Street has long been a major performance venue.  Bands that have played there include:  T. Rex, David Bowie, AC/DC, Pink Floyd, Rod Stewart, Slade, Deep Purple, and many many more.

Over 7.5 million people visit Regent Street every year.  The street is over one mile long and the shops along it employ approximately 20,000 people with 1.5 million square feet of retail space.  In addition to the major retailers, Regent Street contains room for over 400 small offices and 750,000 square feet of space for larger offices.

Due to its status as a fashion Mecca and its length, Regent Street is also referred to as the “Mile of Style”.

It’s a tradition for a spectacle of lights to appear in the major shopping districts of London at Christmastime.  Regent Street was one of the first to get in on this after a newspaper article in the mid-1950s described the “dreary” look of the city during the holiday.  Today, the retailers and sponsors foot the cost of the displays, which can cost up to £500,000.  The Switch On is a major event each year, with a celebrity or some other important person being the one to throw the switch and officially begin the shopping season.

Oldest Kid on the Block

While the store has only been located on Regent Street since 1881, Hamleys toy store is the oldest operating business on Regent Street, having opened originally in High Holborn in 1760.  The oldest continually operating store perhaps goes to Liberty, which opened six years before in 1875.

An Easter Hunt for Adults

After a certain age, many of us stop hunting for Easter eggs.  However, Regent Street hosts a very different kind of hunt, where thirteen bars and restaurants down the mile create bespoke drinks as part of the Easter Cocktail Hunt.  From Gaucho’s to Bentley’s Oyster Bar & Grill, the bartenders and mixologists will use late March to create some truly experimental mixes such as “The Long Good Friday” and “The Bunny Hop White Chocolate Martini”.