You are here: Home / Site News / Featured / 10 Interesting Facts and Figures About Liberty of London You Might Not Know 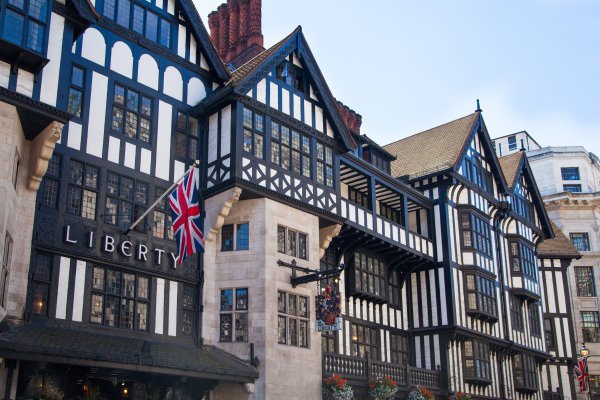 Looking like a building out of Elizabethan times, the Liberty of London department store carries all manner of luxury goods.  In 1874, after spending more than a decade working for Messrs Farmer and Rogers, Arthur Lasenby Liberty decided to open his own store in London.  The store bearing his named opened the next year, dealing with fabrics, ornaments, and Japanese art objects.  Eventually, the store grew in its offerings until it was one of the most prominent stores in the city.  Sure, you may know some interesting things about Harrods or Selfridges, but not you can sit back and read some interesting facts for Liberty.

Arthur Liberty obtained a loan of £2,000 from Henry Blackmore, the father of his (then) fiancée Emma Louise Blackmore to open his store at 218a Regent Street.  Business was so successful that Liberty had the loan paid off eighteen months later.

The well-known Liberty store with its Tudor revival main entrance on Great Marlborough Street didn’t come about until the 1920s.  Construction began in 1924 and used timber recycled from the ships HMS Hindustan and HMS Impregnable.  The frontage has the same length as the Hindustan.  The weathervane on top of the store bears a model of the Mayflower, the ship that brought the Pilgrims to America.

Dotted around the interior of the store are many heraldic shields as part of the decorations.  The individuals represented on these shields include William Shakespeare, the six wives of Henry VIII, and many more.

In 1882, author and playwright Oscar Wilde went on a tour of the United States, bringing with him a wardrobe full of clothes from Liberty, creating a demand for the store’s fashions with Americans.  Wilde was a huge fan of Liberty, saying, “Liberty is the chosen resort of the artistic shopper.” 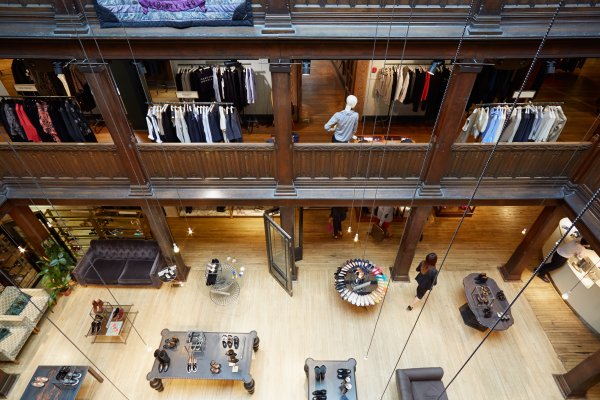 The Colors of Liberty

Produced from 1878 in collaboration with Thomas Wardle’s printers and dyers, “Liberty art fabrics” helped shaped the store’s image in the late 19th Century.  Also known as “Liberty colours”, they were part of the Art Nouveau movement, which in Italy became so synonymous with the department store that it was referred to as Stile Liberty.

The clock on the Kingly Street entrance has some words of wisdom for the shoppers who pass by.  It says “No minute gone comes back again, take heed and see ye do nothing in vain.”  Above the clock, the striking of the hour chime brings out figures of St. George and the Dragon, to recreate their legendary battle every sixty minutes.  On each corner of the clock are the angels of the Four Winds:  Uriel (south), Michael (east), Raphael (west), and Gabriel (north).

When Liberty opened in 1875, the store had only three employees besides Arthur Liberty.  This is a sharp contrast from today where the various Liberty stores and brands employee hundreds of people.

Though a Liberty is not in charge of the store anymore, the descendants of Emma Blackmore still own shares in the company and exercise their influence over its operations.  In the 1990s, they represented 16% of the shareholders with twenty-five members of the Blackmore, Moffett, and Codling families.  As the couple had no children of their own, when Arthur Liberty died, control of the company passed to the Stewart-Liberty family, which also represented a significant portion of the company’s Board of Directors.  The two groups came into conflict about this time over the direction of Liberty, a fight that ultimately resulted in the ousting of then-chairman Denis Cassidy.

In 2013, Channel Four featured Liberty in a three-part documentary that focused on Managing Director Ed Burstell and the retail team in the lead-up to the Christmas holidays. A second series followed. You can watch it in the USA on Acorn TV.

Liberty of London celebrated its 140th Anniversary from its founding in 1875.  To celebrate, the store hosted many parties and special events.  They also introduced a new fabric pattern named “Mayflower”.